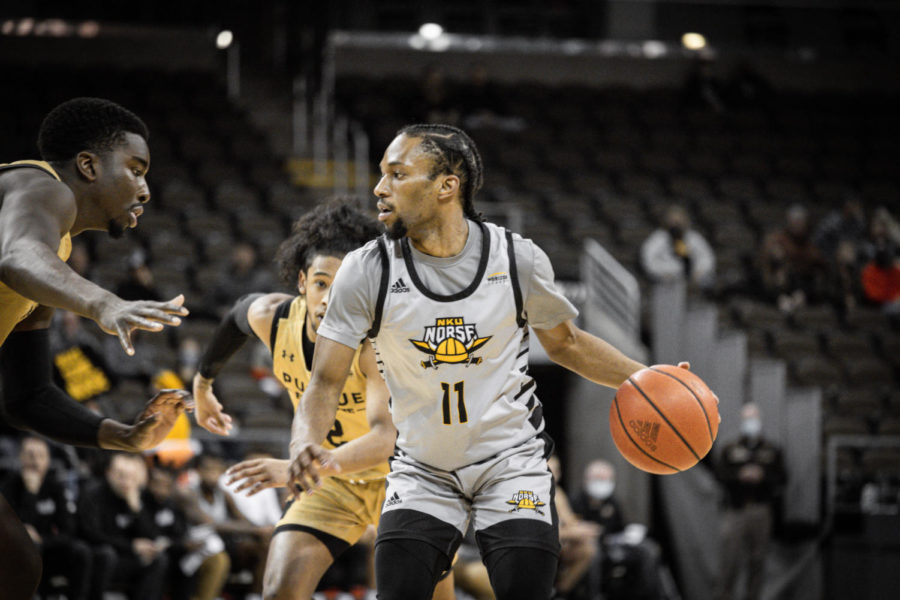 Norse head coach Darrin Horn began his postgame press conference admitting that heading into their matchup with the Purdue Fort Wayne Mastodons, he was concerned about his team’s mental state following an emotional victory against Wright State on Tuesday. Those concerns seemed to be justified during the first half of the game, as the Mastodons came out firing on all cylinders.

The game immediately began with a Jarred Godfrey three-pointer for Purdue Fort Wayne, which gave them the momentum to power their way to a 9-7 lead through the first four and a half minutes. But despite the Norse’s slow start, senior guard Trevon Faulkner would pick up the slack and help the Norse find their way to take a 14-12 lead at the 10:05 mark.

The lead wouldn’t last long though, as the Mastodons took it right back a minute later and wouldn’t look back for the remainder of the half as they pulled out to a 31-28 lead. Jalon Pipkins would put up 12 points and three steals with JoJo Peterson following it up with six points and three assists. In the half overall, Purdue Fort Wayne shot 50 percent from the field with 24 of their first 37 shots coming from inside the arc.

“We gave up too many layups at first,” Faulkner said of the rough first half for NKU. “We preach ‘no layups,’ and for our defense to be effective we know we have to guard the ball and not give the other team easy baskets.”

Things didn’t look a whole lot brighter for the Norse as they came out for the second half either. After Sam Vinson hit a three to tie things back up, Mastodons forward Bobby Plantius came out like a man possessed, scoring Purdue Fort Wayne’s next 11 points with three shots coming from the perimeter. This plus five points from Godfrey over the span of two minutes would push the Mastodons out to a 47-38 lead, making things look bleak for the Norse.

Then, Marques Warrick, who had just two points and an assist coming off of his 23-point performance against Wright State, popped the crowd with a three that swung the momentum back in NKU’s favor.

The fire under the Norse had been lit just then; over the next 4:55, strong defense and pinpoint shooting led to a 13-0 run that showcased the true potential of the Norse. As a team, the Norse shot 4-7 from the field, with Warrick supplying most of the ammo with eight points.

That strong defense stifled Purdue Fort Wayne’s scoring attack, as the Mastodons would only score two points for the remaining 10:39. The Norse finished strong with contributions coming from all over, including 17 points from freshman Sam Vinson and 12 from Faulkner. In the end, the Norse won by a score of 59-49.

Senior Adrian Nelson recorded 12 rebounds on the night, including one that put him at ninth all-time in school history. He acknowledged the feat in the post-game presser, stating his intentions of crashing even more boards in the future.

“I’m not done,” Nelson said. “It’s really a blessing just understanding my God-given talent and knowing that I’m bigger and stronger than most guys. It’s a big thing for me, and I’m going to keep going.”

The Norse aren’t done with their homestand either, as they take on Cleveland State on Sunday, Jan. 30 at BB&T Arena. The game can be seen on Bally Sports Ohio or heard on 55KRC.