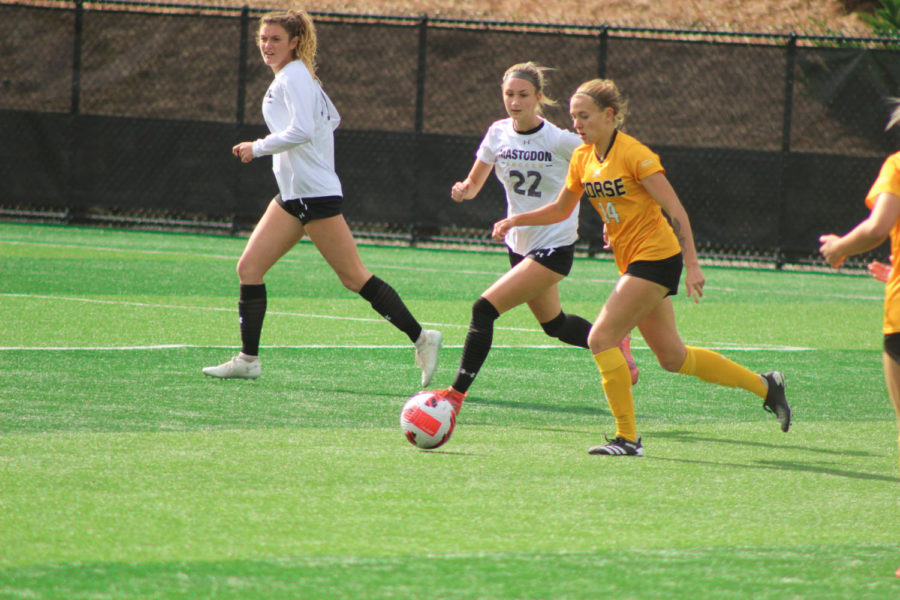 Junior midfielder Megan Sullivan has had quite a week for the Northern Kentucky women’s soccer team.

On Wednesday, Sullivan scored NKU’s first goal of their match against Wright State, breaking a four-match scoreless streak by the Norse as they defeated the Raiders 2-1. The junior also assisted on NKU’s second goal of the night, finding freshman Lydia Self for a goal.

On Sunday, Sullivan found a way to top that performance.

With the score tied at zero in the first overtime period during NKU’s Horizon League tournament quarterfinal matchup against Purdue Fort Wayne, Sullivan received a pass in the 96th minute and blasted a shot into the back of the net, delivering the biggest goal of the season for the Norse and securing their spot in the Horizon League tournament semifinals on Thursday.

“We felt it coming the whole game, we were working really hard,” Sullivan said about her golden goal on Sunday. “Lily (Menssen) had a great ball out to Taylor (Abbott), she took it down the line, which we’ve been practicing on …and Taylor played an awesome slot ball and I just used my left foot and hit it in.”

In addition to being a standout on the soccer field for the Norse, Sullivan is also a track and field athlete at NKU, playing soccer in the fall and joining the track team in the spring.

“It’s an incredible tribute to her athletic abilities and commitment to two college sports,” head coach Bob Sheehan said. “Obviously, we’re very proud of Megan. She’s really versatile on the soccer field, she can play on the back line, she can play wide in the midfield and she can play up front. It’s nice to have her, another piece of the offense coming on here and two goals in the last two games is really important for us.”

In similar fashion to NKU’s last home match against Green Bay on Oct. 23, the match was scoreless for the first half, with neither team conceding many open looks at the goal.

The Norse had just one shot on goal in the first half, a shot by junior Annie Greene that was reigned in by Purdue Fort Wayne goalkeeper Samantha Castaneda. Greene registered four shots in the contest after coming off the bench, three of which came on goal.

While the Norse were not able to generate many open looks at a goal, the defense and goalkeeper Mimi Stines were up to the task on Sunday. NKU allowed just four shots on goal the entire match, while Stines picked up three saves in the match.

“We’ve been working really hard on our defense,” Sullivan said. “I think we have definitely one of the best defenses in the league. All the players back there are very solid and we trust every single one of them and today they had a really great game not letting any through balls, they were winning balls really well out of the air and it really helped us on the offensive side too.”

As the offense for the Norse begins to come back around, the defensive unit has remained consistent, despite the team’s recent four-match losing streak. Since conceding three goals to Oakland on Oct. 14, the Norse have held their last four opponents to a combined three goals, winning each of their last two matches.

“We’ve had some injuries, and so we’ve had some players in and out of the lineup, and it was good to get a group in there that we were able to get a rhythm defensively,” Sheehan said.

The Norse and Mastodons met earlier this month at NKU Soccer Stadium with a much different result, as the Norse scored a season-high six goals on Oct. 7 and easily defeated Purdue Fort Wayne.

“We really knew it was probably going to be a one goal game and we just had to make sure our players were mentally and physically prepared,” Sheehan said. “Sometimes if you think ‘we scored six goals the first time, it’s going to be the same way’, and we knew that was not going to be the case.”

“We had a little bit of a slump there with a few losses, but right now we’re right back where we were at the beginning of the season with the wins and we’re fighting everyday to keep us alive in the tournament and I think we’re really ready,” Sullivan said.