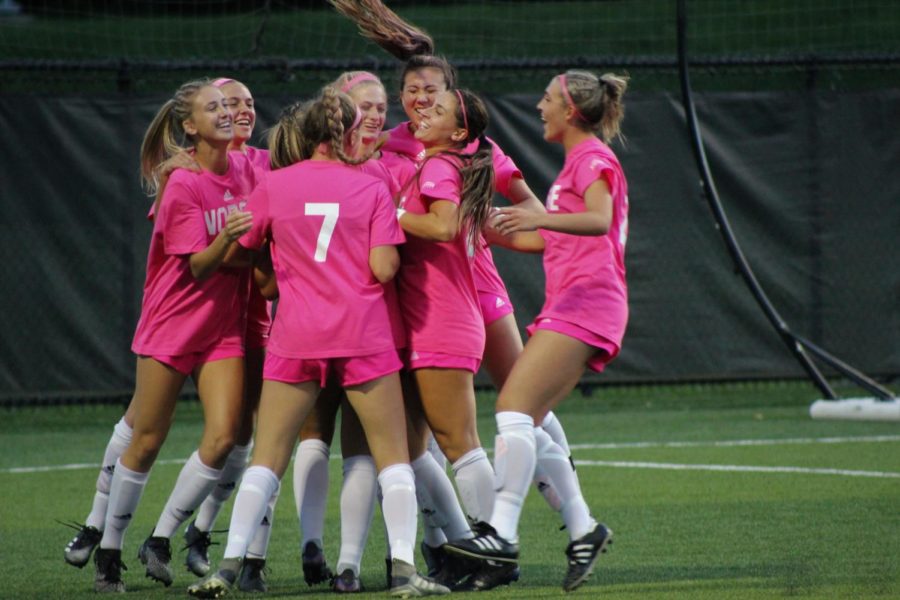 Members of the NKU women’s soccer team celebrate a goal in the first half against Purdue Fort Wayne. The Norse defeated the Mastodons 6-2 on Thursday.

Over the course of the NKU women’s soccer team winning streak, which hit seven games after Thursday’s victory over Purdue Fort Wayne, the Norse have relied on a stingy defense and back line, surrendering just three goals in the first six games of the winning streak.

However, on Thursday at NKU Soccer Stadium, the Norse showed a relentless attack, scoring three goals within the first 20 minutes, and six for the game, defeating the Purdue Fort Wayne Mastodons, 6-2.

“We challenged ourselves with our non-conference schedule. We challenge ourselves everyday in practice, and they have done a great job of responding,” head coach Bob Sheehan said. “

The barrage of goals got started early in the night for the Norse, as senior defender Madelyn Koewler took the first corner kick of the match for NKU in the second minute, wrapping it around the outstretched arm of the Purdue Fort Wayne goalkeeper and pushing the Norse ahead 1-0.

Just over three minutes later, NKU would strike again, courtesy of a laser shot from junior midfielder Kayla Wypasek, giving the Norse a 2-0 advantage as fans were still filing their way into NKU Soccer Stadium.

For Wypasek, the goal was her third of the 2021 fall season, a career-high. That increase in goals scored for the junior has corresponded with an increase in minutes, as Wypasek has played in 806 minutes this season, easily surpassing her 2021 spring total of 419.

“I think just practicing like we play, pushing myself everyday, my team pushes me, they’re great, playing against some of the best defenders and among the best offense, and it’s great,” Wypasek said about several of the driving factors behind her personal success on the pitch in 2021.

Just under 13 minutes after Wypasek slotted a goal into the back of the net, NKU would pick up their third goal of the match, a line drive kick from sophomore midfielder Sofia Wilmes, her team-leading fifth of the campaign. With the third goal, the Norse tied their season-high point total on the season, doing so in just under 20 minutes of action.

Just before halftime, junior forward Annie Greene picked up her second goal of the season off assists from freshman Emma McSwigan and junior Shelby Wall, giving the Norse a 4-1 lead going into the break.

“Our team shape is set up that way, we try to spread the ball all over the field and really all the players in the attack are executing,” Sheehan said.

Purdue Fort Wayne would grab another goal early on in the second half, as Morgan Reitano was able to find the lower right quadrant of the goal, and push the Mastodons back to within two points, with momentum seemingly on their side out of the break.

However, in the 54th minute, the match was stopped due to lightning in the area. From there, the Norse were able to regain energy, and stop the Mastodons’ momentum right in its tracks once the threat of inclement weather cleared.

“Honestly, we were pretty hype in the locker room,” Wypasek said. “We definitely had energy the whole time.”

The Norse were able to add two additional goals following the lightning delay, including an acrobatic goal from junior midfielder Lindsey Meyer in the 64th minute, who took a pass from Wilmes, and kicked the ball toward the net while falling to the ground, fighting through contact from a Purdue Fort Wayne defender in the process.

In the 79th minute, sophomore forward Katie Brock was able to find the back of the net off an assist from junior midfielder Jamie Lehker. The goal was Brock’s first of her NKU collegiate career.

The last time that the Norse were able to record five or more goals in a game was Oct. 27, 2019, when the Norse defeated Green Bay by a score of 5-1.

“The reality is, in training we were not good and the players knew that, and they understood it, and the only way I know how to make it better is repetition,” Sheehan said. “So, we just repeat it over and over and over again, and they bought into that, and so we are going to continue to repeat the training activities and so forth. They’re getting better and as they get better, they get more and more confidence, and you see results like tonight.”

With the lopsided 6-2 victory, the Norse have now orchestrated their second seven-game winning streak in the last two seasons, as the team was also able to put together a seven-game win streak during the shortened, conference-only spring season just several months ago.

The Norse will look to extend their winning streak to eight games on Sunday afternoon, as they travel to Youngstown, Ohio to meet the Youngstown State Penguins.

“We have a lot of confidence, we came out today with the most energy I think we’ve had,” Wypasek said. “Our team had a great performance, it was an all-around team effort and it gives us a lot of confidence going into the rest of the season.”