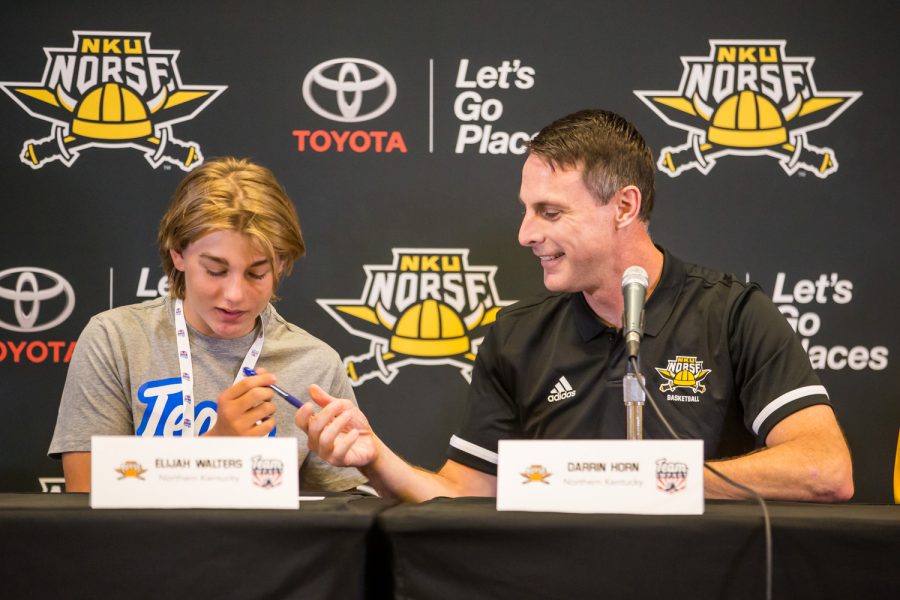 In 2015, athletic and energetic Elijah Walters was diagnosed with Legg-Calve-Perthes disease—a rare childhood condition where the blood flow to the femoral head gets restricted. This causes blood to stop. The bone begins to die resulting in the hip to collapse, fragment and disintegrate.

Even though this diagnosis has limited his mobility, his lively spirit has never stopped, according to Elijah’s mother Tiffany Walters.

“Elijah is definitely a kid of light. He is light,” Tiffany said.

Team IMPACT is a national nonprofit that connects children facing serious and chronic illnesses with college teams to form life-long bonds. NKU has done this before with Destiny Owen and the softball team, as well as sisters Leah and Taylor Conrad and the volleyball team.

“It’s funny in coaching and athletics specifically. We talk a lot about things like adversity and being tough, being a guy that fights through things,” Head Coach Darrin Horn said. “But it’s really just basketball. This young man has come in here and is fighting something [that’s] a daily battle for him and has had a great attitude and it has truly inspired us.”

Before being diagnosed, Elijah was involved in sports—playing football, basketball and baseball. When he gave up sports at the age of 10, everything that made him Elijah was stripped away from him, said Shayne Walters, Elijah’s father. His identity as an athlete was no longer there.

“It was a really big challenge to give up football, basketball, baseball and things I love to do,” Elijah said. “But there’s a lot of people in my life that have been really helping me out through it and really supporting me.”

Elijah also has three siblings who are part of his support system Older sisters Savana, who’s a freshman at Southeastern University in Florida, and Aleah, a junior at Loveland High School. He also has a younger brother, Judah, who’s in fourth grade. Although they have been indirectly affected by Elijah’s diagnosis, they have loved and supported him along the way.

“They were very patient and very much in love with him and support him,” Tiffany said. “They’re very mission minded kids so they get, for whatever reason, this has been an assignment we’ve been given.”

Elijah has had 15 surgeries and over 300 sessions of physical therapy using wheelchairs. He’s also had failed surgeries. Elijah was able to do what his doctors said would be impossible in August of this year, stepping back on the football field as a quarterback for Ludlow High School’s freshman football team. He won’t be able to finish the season on the field because he will be undergoing his 16th surgery scheduled for Nov. 1 at Cincinnati Children’s Hospital.

“Every day is kind of day to day,” Shayne said.

It took four years of surgery and physical therapy for Elijah to get to the point where he could play. Getting to that point was a huge accomplishment when he thought he would never get the opportunity to play again.

“And so after this we always just say, we’re going to live in the moment because every moment changes for us,” Shayne said.

Since being a part of the men’s basketball team, Elijah has felt a sense of community and more of a push to continue his focus. The team has spent time playing video games, coming to his school events and letting Elijah hang at practices.

“It’s great to finally be part of a big team and have a ton of guys to look up to,” Elijah said. “I enjoy how friendly they are and how they support me and it’s also just a great experience to be around them and learn how they play.”

Although Elijah is battling Perthes, the family looks at this as an opportunity to spread awareness to more parents.

“We’re just very, very grateful and are looking forward to what this is going to mean for him,” Tiffany said. “And even the awareness that it’s going to bring to Perthes in general. He has a late onset of Perthes and we had no idea, knew nothing of the disease and so we’re hopeful this will shed light for parents as well. That will be something that comes to light for people.”

You can read more about Elijah and The Walters family journey through living with Perthes on https://perthesquarterback.com/