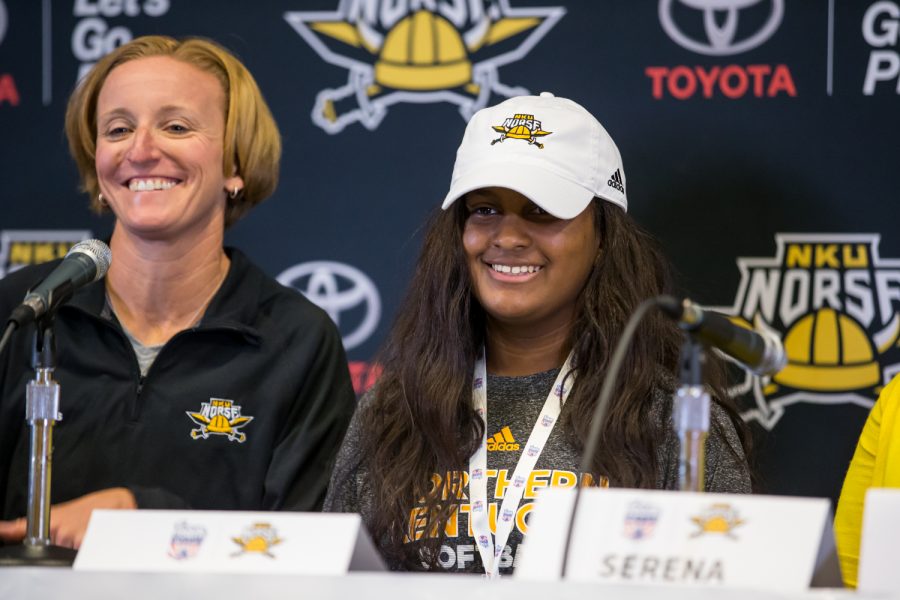 The podium was set and waiting for NKU softball’s newest teammate, 12-year-old Destiny Owen, to sign her letter of intent. Alongside her were her mother Serena and father Larry, head softball Coach Kathryn Gleason, and junior softballer Kailey Rossiter. Family members were decked out in NKU gear, the NKU softball team, and members of the athletic department wore smiles as Destiny sat down for her big day.

Destiny was diagnosed with gastrointestinal and sleep disorders back in 2014, but she hasn’t let those hinder her from anything. She has attended multiple practices and softball outings already to make her feel a part of the team.

Tuesday’s draft day was held within BB&T arena’s media conference room. There were cameras, lights, balloons and banners stamped with Team IMPACT, and the iconic NKU sports backdrop set up for Destiny’s moment of “making it official.”

She smiled as she signed her name and answered questions for reporters. “I like to do the batting, I like to catch the ball, and I like to pitch the ball.” Destiny stated as her favorite activities she’s done with the team in practice.

“We were excited two months ago when we got the call from Team IMPACT that Destiny would be our new teammate. And ironically, our team theme this year is to be a great teammate,” Coach Gleason said. “So we’re excited to welcome Destiny.”

Destiny’s mother, Serena, was more than excited to have her daughter a part of Team IMPACT as another support system.

Destiny’s no stranger to NKU. She’s been around campus since she was five accompanying her older brother and graduate student Jibril McCaster. Both of her parents are also proud alumni.

Even as a rookie, it’s easy to see that Destiny is already making her mark on the team.

“To have her come with her energy and enthusiasm every day. I mean, she comes to practice every other day. It just gets [the team] out of being a full-time student athlete for a minute,” Gleason said. “Just like the name says, Team IMPACT, she’ll make an impact and we’ll have an impact on her and her family.”

And lucky for the Norse, Destiny is already a decorated athlete. She has gold medals of her own to prove it: 20 to be exact, which she has earned at the Special Olympics over the last eight years.

The 100-meter dash, softball toss and the 4×100-meter relay are Destiny’s signature events, and she seems to make it to state every year, where she competes to win these gold medals.

Her coach is looking to nominate her for the worldwide Special Olympics in about three years. NKU’s softball team plans to teach her a thing or two before Destiny achieves her Olympic goals.