If you have been on any social media where NKU basketball fans lurk, you’ll notice the hashtag trending #WrightStateHateWeek in anticipation of tonight’s game.

Good morning to everyone except anyone who associates with Wright State 👋🏻🖕🏻

It’s all unfolding tonight in front of a packed BB&T Arena and a national TV audience at 7 p.m.

This game is important for the Norse to remain within the top standings of the Horizon League. So far, they’re only trailing behind Detroit Mercy, which has had a 4-1 start.

Facing Wright State is not only important within the league — it’s a huge fan draw. It is alumni night for NKU fans; the first 1,500 fans will receive a mini basketball. It’s also Campbell County residents’ night, so those with proof of county residence will enjoy $9 tickets.

Last season, the Norse lost to Wright State twice within the final minute, the first time by three points (84-81) and the second time was by two points (69-67).

Wright State, as a team, averages 72.9 points per game and on average allows opponents 69 points per game. The Raiders currently sit at fifth in the overall Horizon League standings, but are second in the league in offensive rebounding with an average of 37.8 percent.

The Norse look to have more efficiency when it comes to scoring. One thing that stands out is the battle of the backboards, with Love of Wright State and McDonald both being rebounding standouts for the league. Wright State is a big bodied team that physically measures up just as big or even bigger than NKU this year. 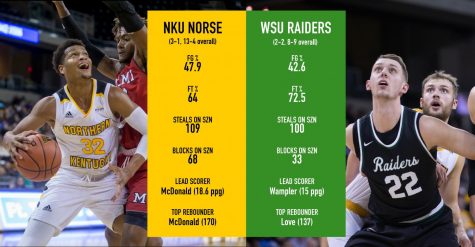 In the Horizon League, the Norse are second overall (13-4, 3-1) averaging 79.3 points per game, while holding opponents to 66.5 points per game. The Norse sit atop the league in field goal percentage shooting at 52 percent, and first in assists averaging 19 per game.

Nationally, NKU is ranked at 67th for scoring offense. With a 1.38 assist to turnover ratio the Norse are 29th, and in assists, the Norse are 30th averaging 16.8 per game.

The Black & Gold are coming off a 95-73 victory against league leader Detroit Mercy Titans with six NKU players scoring in the double-digits.

McDonald led the charge against the Titans with 23 points, sinking 8 of 11 shots from the field. Sharpe followed up with 20 points, scoring 5 threes.