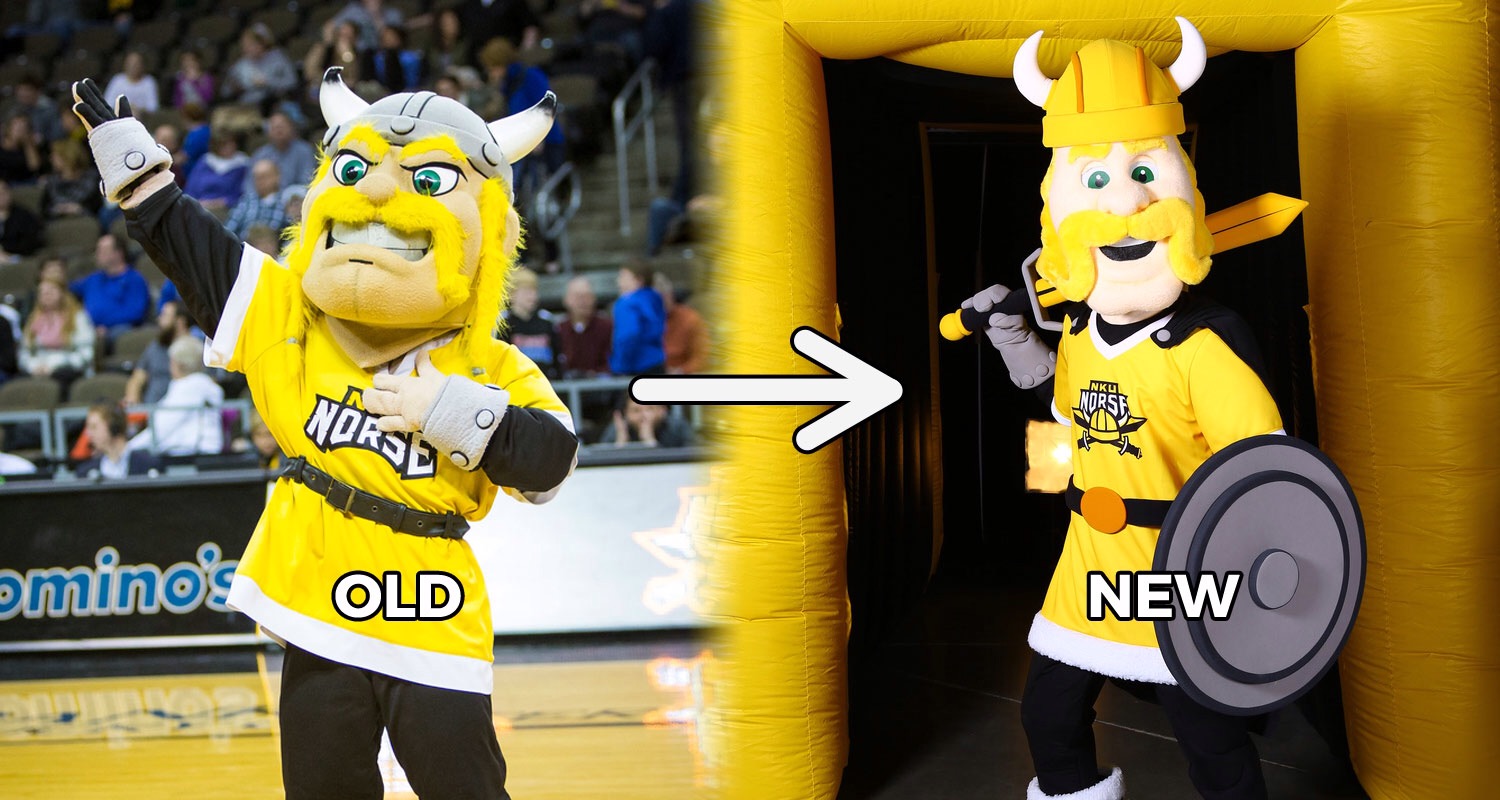 What do you think of Victor’s new look?

His face has changed the most. The new Victor E. Viking has a smile that is less sinister, eyes that are wider and eyebrows that are not furrowed.

After 11 years, NKU’s mascot got a $10,000 makeover thanks to the digital printing company Olympus Group, making him look more friendly and less fierce.

“We aimed to create a Victor who is more friendly and approachable, and to soften his demeanor,” Brandon Hays, assistant athletic director for marketing, promotions and tickets said in a statement. “While it was certainly fun to be mentioned as the ninth scariest mascot in the nation by ESPN, we hope the updates to Victor won’t be quite so frightening to our younger fans.”

Victor’s makeover comes a little over six months after NKU Athletics unveiled the new logo, a change that also incited opinion among the NKU community.

The intended use of Victor is to be the face of the kids club and community engagement, Bryan McEldowney, assistant athletic director for communications and media services, said, making it necessary for the athletic department to adjust Victor’s appearance.

“As fun as it was for adults and the student body, you have to think about what the intended use of a mascot is,” McEldowney said. “And that drove our decision to make a few changes.”

In a similar reaction to the new logo the athletic department rolled out during the 2016 spring semester, the social media reaction from the student body and alumni indicate they are not thrilled with Victor’s makeover.

Brandon Neilan attended Northern Kentucky University as an organizational leadership major from 2013-2014 and is now a marketing specialist at a global electronic components manufacturer in Cincinnati.

He believes the new mascot is elementary and doesn’t fit the demographic for the mascot.

“It kind of looks like they just threw it together and put it out there,” Neilan said. “The features weren’t real thought out. People are all 18 and older and in the adult world there. It’s a real disservice to NKU.”

I love NKU so much, but the mascot and logo changes are a complete jooooke #embarrassing @nkuedu @NKUNorse

okay but why did nku make victor e. viking look like he should be the mascot on off-brand cereal boxes?

— sarah flaherty (@sarahkflaherty) September 30, 2016“We know a lot of that was negative,” Hays said. “We had Victor at the volleyball game on Friday with three youth teams and they all loved them.”

While Hays and the rest of the athletic department have seen all of the negative tweets, they have also interacted with people who like the new Victor.

“We know a lot of that was negative,” Hays said. “We had Victor at the volleyball game on Friday with three youth teams and they all loved them.”

The new Victor also made an appearance at the Northern Kentucky Kite Festival and Hays said the reaction to Victor was also positive.

“The organizers of the Kite Festival said he was the hit of the event,” Hays said. “We were excited to hear that he went over well in those audiences.”

Students had the opportunity to share their thoughts on the new Victor through a survey the athletic department sent out, according to McEldowney.

“We sent it out on all of our platforms and we had the opinions of 260 people in that survey and listened to what they had to say,” McEldowney said.

Neilan however, believes from talking to people he knows who currently attend NKU, that the athletic department did not take the student interest into consideration.

“All the comments I have seen from students and alumni are essentially stating that this is a really bad way to put together a mascot,” Neilan said.

McEldowney insists there was effort put into making Victor something that students were proud of and isn’t sure where the disconnect happened.

“We spent a month try to get this out to people,” McEldowney said. “I don’t really know what to tell people who say they didn’t see this. In the future we may have to explore different ways of spreading the word out. Maybe we can talk to SGA about helping us spread the word.”

Victor was supposed to be revealed at Victor Fest in August, but an issue with the coloring of his boots put that plan on hold until last Friday.