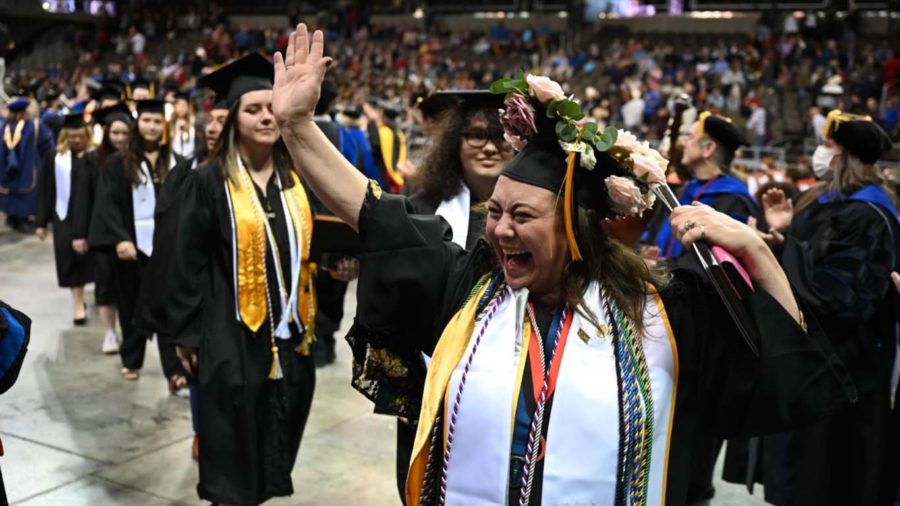 NKU’s Fall Commencement ceremony was held Saturday, Dec. 17 at Truist Arena. Two ceremonies took place, with the College of Education, College of Arts and Sciences and College of Informatics occurring at 10 a.m., and the College of Health and Human Services and Haile College of Business following at 3 p.m.

More than 1,300 students joined the likes of over 77,000 NKU alumni on Saturday, according to President Ashish Vaidya’s commencement address. Of the nearly 1,300 graduates, over 200 earned a GPA of 3.5 or higher and 336 were first-generation students. 11 countries, 33 United States and 75 Kentucky counties were represented at Saturday’s ceremonies.

The fall commencement served as a final goodbye for President Vaidya, as it was his last event to preside over before his official departure on Dec. 19.

Student speakers addressed the arena at both ceremonies, with public relations and history double major Abbygail Wright at the 10 a.m. ceremony and social work major Kasey Duncan at the 3 p.m. ceremony.

Both Wright and Duncan reflected on their years at NKU, recalling how the group of graduates transitioned again and again as the COVID-19 pandemic struck.

“Only a few short years ago, our college experience was likely not what we had imagined it would be. From a prolonged spring break, we resorted to online classes, and then we adjusted back to being in person,” Wright said. “We have proven capable of just how likely we are to be able to adapt and overcome changes and challenges, no matter how bizarre or scary they may seem.”

Resilience was the theme of Duncan’s speech, as she discussed her experience transitioning from Louisville to Northern Kentucky and taking on an internship with the Campus Police.

“Here we stand at another precipice of unpredictability,” Duncan said. “I cannot promise you that there will be no more world-changing, life-altering hurdles, but I promise you’ll make it through them; you’ve already done it once.”

Commencement speaker Dr. Jonathan Cullick addressed both the morning and afternoon commencement. Cullick, who is an English professor at NKU, received the 2022 Milburn Outstanding Professor Award.

Cullick shared his story of learning, accrediting much of his abilities as a professor to his father who was a shoe salesman. Cullick said he learned how to communicate and understand others from his father, and this is a skill that will be essential to graduates as they build their career. The professor encouraged the new alumni to be lifelong learners and seek out new stories, both those that are comforting and challenging.

President Vaidya addressed the crowd prior to the conferral of degrees, recognizing the resiliency student speakers Wright and Duncan spoke of. He hoped NKU would be considered a forever home for the graduates and they would hold fast to the relationships they created with peers, professors and staff. No matter what the next journey would hold, Vaidya reminded the graduates they had vastly new perspectives and a network of support that would be behind them.

As graduates walked across the stage, they were greeted by the dean of their college and President Vadiya. After the reading of all students’ names and the performance of the Alma Mater by three School of the Arts students, vice president for Student Affairs Dr. Eddie Howard announced the conclusion of the ceremony. Students exited the arena to a spirit tunnel of attending faculty, marking a new chapter in each graduate’s story.