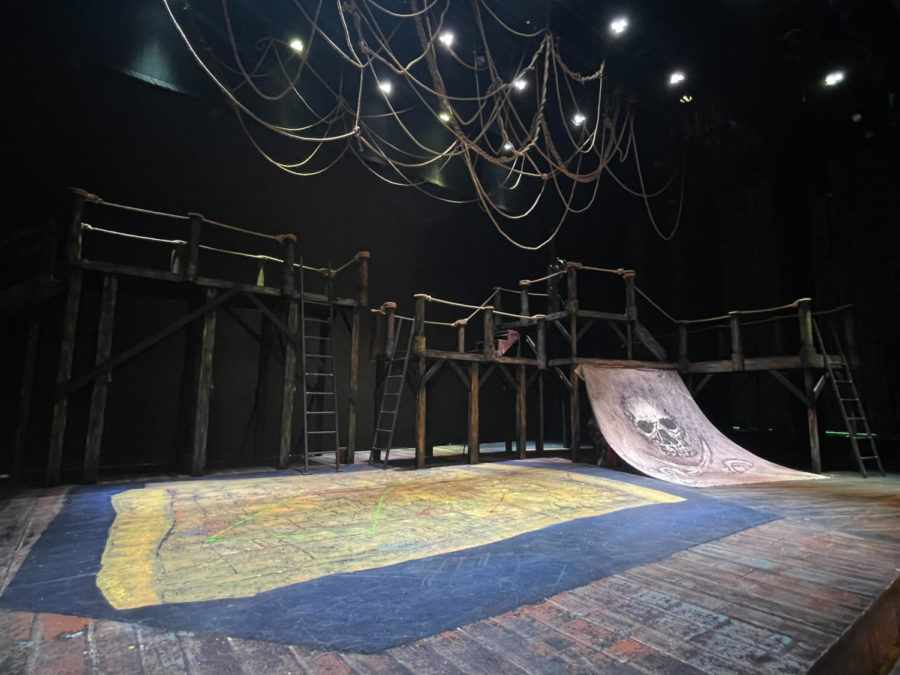 The Corbett Theater, which is currently uneven due to the shale movement; however, due to the “Peter and the Starcatcher” set, the stage was obscured.

A deeper look into future construction within the Fine Arts Center

Construction has taken place all across NKU’s campus, from the MEP Bridge to areas around Loch Norse being renovated this past semester. Starting as soon as the spring of 2023, the Fine Arts Center will also have construction taking place within its walls. According to Michael Hatton, the Theater and Dance Program Head of SOTA, this construction has been needed for about the past 12 years.

Mary Paula Schuh, Senior Director of Planning, Design & Construction on the NKU Facilities Management Team, explained why the construction must take place in the Fine Arts Center and the importance of getting it done.

There is evidence of the shale underneath the Fine Arts Center, a small area of Steely Library, Founders Hall, Nunn Hall, Business Academic Center, Landrum Academic Center, the Natural Science Center building and Truist Arena, according to Schuh.

NKU was unaware of this issue until Landrum had its walls pushed up by the shale. To clarify, the building itself is not being pushed up, but the walls within it are. This means that Landrum itself is not necessarily structurally unstable, but the drywall may crack and doors may get harder to open. The steel studs within the drywall will bend with the push.

However, in the Fine Arts Center, the situation is different. Since most of the walls within the building are made of concrete block, it won’t crack like the drywall might in Landrum. The concrete that is being pushed up will continue to do so; it won’t bend like the drywall does.

Schuh assured that this doesn’t mean that the SOTA building is ready to break at any moment, unless they totally ignore the issue. In the summer of 2020, room for compression from the shale was added, so the walls had more room to be pushed up.

While the Corbett stage and scene shop are the most prevalent places where you can see the push, it has also affected other areas of the Fine Arts Center. No construction will take place in Greaves Concert Hall, the second floor rehearsal rooms or the Bandroom, according to Hatton.

Construction will take place in the Corbett Theater, the scene shop, paint room, prop shop, dressing rooms, the 116 Dance Studio, 117 Acting Studio, 118 Studio Theater and the lobby within this area.

“In the Corbett Theater, we have some pretty large heaves, some raising and lowering in the areas of the stage, so much so that it’s no longer flat. So we can’t install a set piece or anything like that and have it be flat, you’ll see gaps,” Hatton explained.

Although the construction taking place can’t be seen from outside, the Fine Arts Center’s first floor will be excavated out and redone from scratch, including things such as plumbing and electricity, Hatton said.

You can expect to see some new installations within SOTA due to this construction. This includes a new single-person restroom, a smaller and more private dressing room and a cross hallway to make the walk from Greaves to the Corbett more accessible, Schuh said.

Due to this construction taking place throughout the whole building, it may mean at certain times portions of the Fine Arts Center will not have heating or cooling. Schuh explained that it should only be for short periods of time and only little parts of the building at a time.

This construction is planned to start over the summer, in either June or July, and go into the academic year. It will take at least a full academic year to complete. This timeline may be longer and is not set yet due to budgeting issues still being resolved and construction phases being worked out, so that the building is still safe to be partially occupied and working with the design and construction team.

In this case, they were able to put a certain amount of money towards this construction. This is just one of the projects that is allocated for the money to go toward. Some of the other projects were discussed in an overall story about the construction happening around campus.

For students, this means that classrooms may change location, they may have to work at stages off campus and overall be understanding of the construction that is to take place.

“One of the most important things going into this is making sure that the student experience is not negatively affected. That is our number one priority across the board,” Hatton stated.

To make sure of this, they are currently coming up with solutions to make sure the student experience is not heavily altered. When the Corbett Theater is unavailable, Hatton described that using the Carnegie Theater in Covington is in the works to house the mainstage productions during that time. Some collaborations across campus will also take place, but Hatton could not mention them in full yet. The Campus Planning Office stepped in to help find spaces as well that are still on campus. For example, the scene shop will be held in Campbell Hall’s scene shop space. The Henry will also take place here and in rehearsal halls. They are also working on making transportation accessible to these different locations.

Reagan Wildoner, a third-year theater arts major, expressed how although information has been relayed transparently, there is still uncertainty for details of what will be happening.

Although Wildoner is not necessarily upset about this happening, he hoped his senior year would be normal. His high school senior year was spoiled by COVID-19, where nothing took place during this time that he could participate in. While he is thankful these issues are being figured out, he wishes that he knew more information considering logistics of this.

Through all of the construction and uncertainty of when it may be completed and how long it will take, there is one theme that rings true: after all of this, the quality of learning and student life at SOTA will be improved.

“Changes that will be made on the first floor are going to make it even better for our students to learn to practice their craft … It’ll be a better experience for our patrons coming into the building and going to our theaters. And it will allow our students to do better work and continue to grow as artists in a newer space.” Hatton explained.