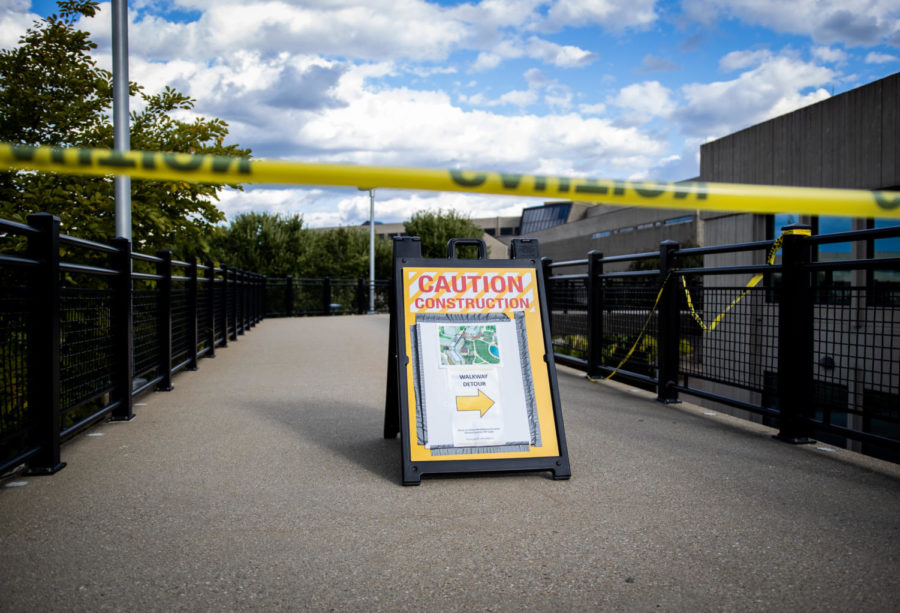 The bridge connecting University Center with the MEP and Lucas Administrative buildings is expected to close until late November.

NKU infrastructure projects: The big, the small and the necessary

An overview of recent and upcoming infrastructure projects at NKU.

Bright orange fences in the sun. The sounds of drills and excavators. Dirt, dust and debris. Northern Kentucky University campus is undergoing construction, but maintenance and renovation of the infrastructure extends far underneath closed pathways, far from the public view.

The most prominent construction is taking place on the bridge connecting University Center with Lucas Administrative Center and the Mathematics-Education-Psychology Center, which is closed for repair until late November. The MEP building itself saw the replacement of its emergency generator in September, giving it access to back-up power in case of an outage. A short walk away down a flight of stairs, the crumbling Loch Norse pavers next to the Fine Arts Center were also repaired for several weeks through the month.

These are just a few of the most visible examples of maintenance and renovation at NKU, processes that are ongoing at all times. Some entail entirely new additions to the NKU campus, most notable of which is Opportunity House: a partnership with Brighton Center and the city of Highland Heights to provide postsecondary educational and career opportunities for foster care alumni and other vulnerable young adults aged 18 to 24.

Opportunity House was converted from the vacant Brown Building located next to Callahan Hall, now furnished with 15 single-occupant rooms, a meeting room/classroom, kitchen, laundry room, offices, storage and communal spaces. The facility officially opened Sept. 14 with a ribbon-cutting ceremony and is now fully occupied by students who plan to attend NKU or Gateway Community and Technical College.

Other projects at NKU involve transformation of existing infrastructure, exemplified by Phase II of the renovations to Norse Hall that took place throughout this summer. Estimated at $3,262,000 according to the university’s Facilities Management Report, it is the most ambitious program that was completed this year, followed by the construction of Opportunity House.

Still, projects with even larger scopes are on the horizon. Two planned for late spring of 2023 involve the complete demolition and reconstruction of the heaved floor slab on the first floors of the Fine Arts Center and Nunn Hall – alongside installation of a new fire alarm system in Fine Arts, replacement of bathrooms in Nunn Hall, and upgrades to heating, ventilation and air conditioning (HVAC) in both buildings. The projects are estimated to reach $13,240,000 and $8,880,000 respectively.

Cost is not the only measurement of scope, however: it also comes as the sheer amount of work that a building receives. Callahan Hall has seen and will continue to see various upgrades to its infrastructure, from repair of the stairwells and interior repainting to a new exercise room and renovated courtyard. Work on these projects began in spring this year and is expected to finalize in the fall.

Of the 19 projects listed on the Facilities Management Report, six are funded primarily by the state for Asset Preservation – so long as $0.15 of NKU funds is matched for every dollar of state funds – including the two major floor heaving projects. The remaining 13 derive their funding from a deferred maintenance project pool – an amount allocated from the university’s budget prior to the establishment of State Asset Preservation funds – with a few exceptions.

“This is just the tip of the iceberg in terms of construction,” said Assistant Vice President of Facilities Management Syed Zaidi, referring to the biggest, most visible projects. Many projects are in the design phase and more construction will occur during winter break when crews will be more present on campus, he added.

The vast breadth of the infrastructure iceberg concerns the details and aspects that may not be immediately visible, but contribute to the effective working of NKU: cooling and heating units, linkages and valves on power plant boilers, drains and drainpipes, fans and high voltage switchgear, electricity fixtures. Zaidi called a project to replace 16 streetlights set for this fall his number one priority, as well as a program to repair sidewalks on campus.

Though kept largely out of the public view, these infrastructural details can have wide-ranging impacts should any issue occur to them. According to Senior Director of Design, Planning and Construction Mary Paula Schuh, last year the water line under the bridge to the MEP building broke, and the nearest valves in the line could not turn to close the water.

“Our water system is designed as a loop system and there were valves on both sides of the break, and because the isolation valves on the east side wouldn’t close tightly, they had to close the east loop, which impacted AC [Administrative Center], FA, MP and BC [Business Center] buildings,” Schuh explained.

The team aims to replace the older valves so that sections of the water loop can be isolated, allowing them to shut down only one building instead of shuttering multiple like last year.

Preventing issues like this means NKU is in a constant state of maintenance and improvement, which can be complicated and costly, but some projects have had better outcomes than facilities management anticipated.

“A number of projects have turned out to be cheaper,” Zaidi said, a boon in an industry that is seeing price escalation because of supply chain issues.

The team is particularly proud of a roof restoration project for the University Center, Business Center and Science Center, Zaidi added. Instead of replacing the roofs and having to discard the materials in landfills, they rebuilt layers of the roofs and added 20 years to roof lifespan, further supporting NKU’s sustainability while saving half of the intended cost.

Noise, construction trucks and blocked entrances might not be a welcome presence, but they are part of the natural, organic process of keeping the campus vibrant and viable, Zaidi said.

“The campus is more than 50 years old and these buildings require tender, loving care,” he said. “Help us, bear with us. Everyone should budget a little more time for transit when you come to class … Be very optimistic that, at the end of the tunnel, we’ll have a much better, prettier campus.”