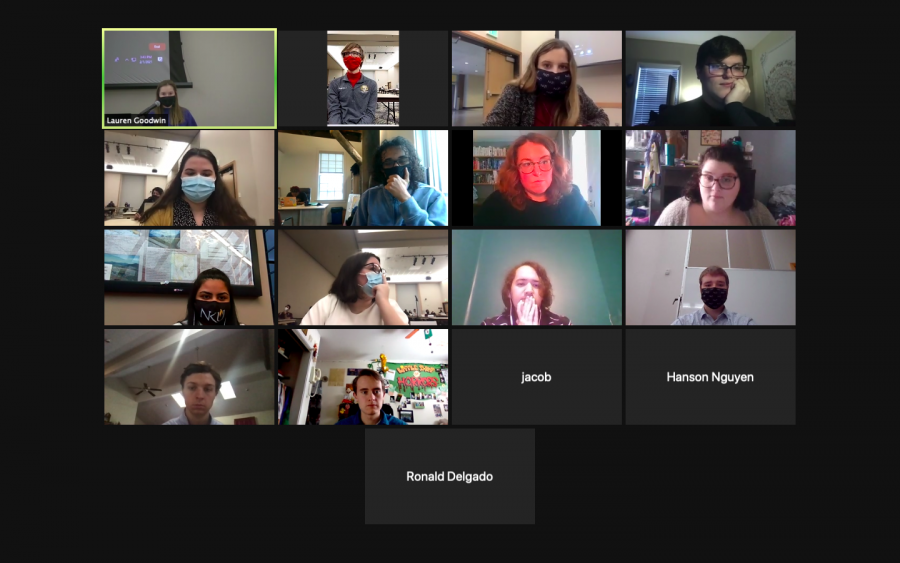 SGA currently meets in a hybrid format with attendees opting to appear virtually or in-person.

At this afternoon’s SGA meeting, the diversity problem on campus was discussed in regard to the white supremist group that came onto NKU’s campus and vandalized parts of campus last Wednesday. A guest speaker attended the meeting as well as four new senators and one new justice being appointed and sworn in.

“I think we are all in agreement that the issues, the items and the vandalism that occurred on campus is something that none of us tolerate and none of us support … so, I think it’s important to take a step back because we all are feeling frustrated, we’re feeling hurt, we’re feeling disgusted; we’re feeling a lot of different emotions,” Slaughter said.

Slaughter said that the acts performed on campus last week are not and never will be tolerated and that NKU’s community needs to come together to make NKU a more safe and inclusive campus.

“Please know that this is not a student versus administration or administration versus staff or faculty versus students or alumni versus everyone. It’s not that. What we need to do is figure out how we’re going to move forward and how we are going to react,” Slaughter said.

Slaughter also said that students cannot give these supremacist groups the attention and reactions that they are wanting.

“They’re [the supremacist group] sitting back on their couches or wherever and they’re watching the seeing that [the reactions] … they’re sitting back taking joy, and the fact that they caused chaos on our campus and they made you all as students feel a certain type of way. We cannot give them that satisfaction,” Slaughter said.

Slaughter added that these groups will not be greeted with open arms.

“This is our home and we’re not going to tolerate it,” Slaughter said.

He said he welcomed the voice of students at this time.

“I think that most of the students’ frustration is the whole idea of empty promises from the institution and I think that ties in with SGA specifically and why a lot of us are so angry,” Arango said.

“Our entire job and the reason that we are here is to represent the student body… to have no say from the people of color in the community or marginalized groups in the community and have people that are not necessarily marginalized write a statement on behalf of how people are feeling and how Patriot Front hurt us was like a slap in the face,” Arango said.

Slaughter added that these challenging conversations are important to have because they get things done.

“I don’t want you all to have these things figured out all the time. I want you to have these challenging conversations because guess what? That gets results that lets us say we’re not going to do the status quo and just live in this Pollyanna campus,” Slaughter said.

Senator Kaitlin Minniefield also spoke out at the meeting about the diversity problem on campus, mentioning that there are only five or six members of SGA who are minorities.

“There’s no diversity here, there’s no inclusion here, we do not denounce white supremacy on this campus, no matter how many times NKU says that we do,” Minniefield said.

Minniefield added that NKU does not denounce white supremacy no matter how many times its administration says that it does due to freedom of speech.

“We don’t denounce white supremacy because we had a group of white students stand in front of our Student Union and have a rally, for what? They’re not denouncing white privilege because it’s the same privilege that is allowing them to stand out there and make a mockery of our whole entire university,” Minniefield said.

Minniefield said that she feels out of place at NKU due to her being a minority race.

Senator Aliya Cannon, who was appointed and sworn in today, also spoke out about the lack of diversity throughout SGA. She asked everyone to raise their hand if they felt hurt or scared about the supremacist group that came onto campus last week. Not many people raised their hand.

“What we see is privilege because not everyone in this room raised their hand and privilege is not a bad thing but privilege means that you need to educate yourself, and you also need to help the individuals that are being oppressed,” Cannon said.

Cannon added that she experiences oppression first hand due to her being Black and shouldn’t have to fight for her life due to the color of her skin.

“Y’all might not take it seriously, but I’m tired of fighting for my life because white people don’t want to fix what they’re doing. So, as an SGA, it’s time for y’all to stand up … once we can get there and we can do that, that’s when SGA will actually be an organization that minorities want to be a part of,” Cannon said.

Cannon said that she wants to see SGA stand up to the lack of diversity its own organization faces.

“If you see that your organization isn’t doing what it needs to do, then maybe you need to look at the individuals in the organization and make sure that those individuals fit the values and the goals and the mission because if it doesn’t matter and they don’t align with it, then obviously they don’t need to be here because they’re not helping the overall mission of SGA,” said Cannon.

Slaughter concluded this conversation by having everyone write down three things that they can personally do to make an impact on campus and make a change toward improving the diversity issue on campus.

Berland presented furnishing options to members and gathered their thoughts and opinions on things such as games and entertainment.

So far, the residence hall will include conference rooms, study rooms, group study rooms, an open-floor space, eating space and game space. There will be lots of different furnishing such as ottomans, couches and tables as well as amenities including gaming boards, TVs and white boards.

SGA welcomed four new senators and one new justice today at the meeting. Secretary Stephen Cordle appointed and sworn in the following members:

Chairwoman of Academic Excellence Committee Hannah Miller updated everyone about Homecoming and said updates will be sent out soon via email.

Senator James “Jimmy” Renton reminded everyone of the Green New Deal Town Hall meeting that will be held through Zoom on Feb. 6 from 6:30 p.m. to 8 p.m. A maximum of 300 people can register here.

Senator Aliya Canon also reminded everyone of the Black Norse Homecoming Experience that will be held virtually on Feb. 19 from 6 p.m. to 9 p.m. A maximum of 300 people can register here.