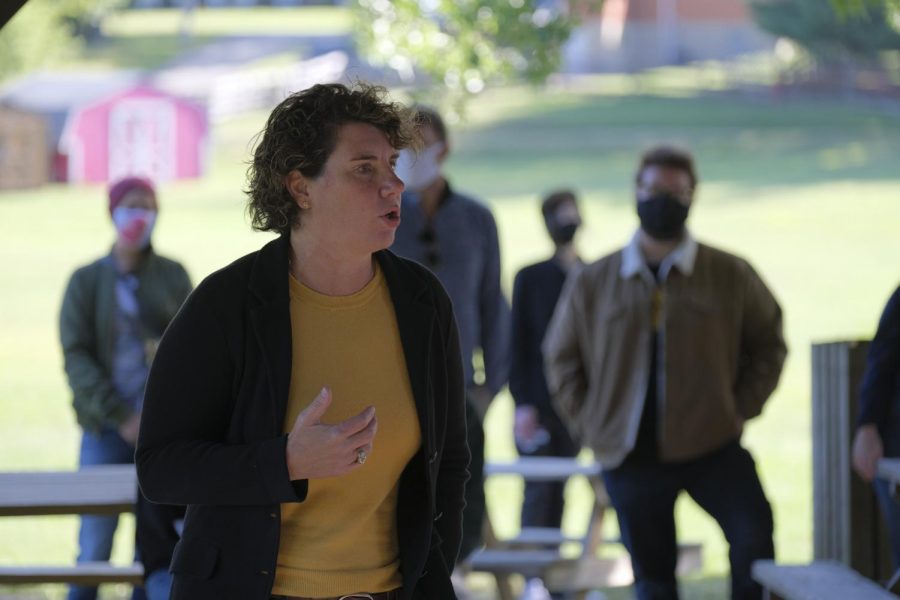 Saturday morning, Kentucky Democrat Senate candidate Amy McGrath spoke with NKU students and community members about the importance of voting, her stance on issues and ways to encourage your friends to vote. The Northerner spoke with McGrath after the event and asked her about gun violence, student debt, LGBTQ+ protections and more.

The Northerner: NKU ranks 5/5 on the Campus Pride Index, a National Listing of LGBTQ-Friendly Colleges & Universities. If elected to the Senate, what protections will you offer LGBTQ+ Kentuckians?

Amy McGrath: “Have you heard of the Equality Act? I would be 100% for the Equality Act. I think that’s something that we need to do at a national level. I’m somebody that always believes in diversity, believes that we need to protect people who have been disadvantaged and that includes LGBTQ. I’m somebody that served in the military, and when, in my mind, at a time of change, even in the military, and I always say to people, ‘you know, in combat, you know what we care about? Can you do your job? Are you somebody of character? Are you somebody of integrity?’ And it’s not who you go home to at night or not who you marry, but can we count on you? And that’s the attitude that I have that everybody is treated with dignity and respect no matter who they are. And many times, we need to stand up and make sure that everybody has those same protections under the law. Okay, that’s what I want to do. That’s why I’m for the Equality Act.”

TN: How are you appealing to college-aged voters who are seeking progressive candidates this election year? Especially to those that feel discouraged due to their choice of candidates not being nominated.

McGrath: “I would say, you know, our democracy is an amazing thing. And we have, so for example, the primary, my message to anybody who voted in the primary—whether they voted for me, or whether they voted for somebody else, whether they voted for somebody who was more progressive, perhaps—is, ‘I’m with you. I want change. I want change, too.’ So we got to come together and make that happen. And we can make that change that we need in this country. We have, as I mentioned, here today, we have a senator who’s holding up 400 bills right now. He won’t even let our democracy work. So the first step of that is getting rid of him. That’s what I’m focused on. That’s what I would tell people.”

TN: Expensive college education has left younger generations with crippling student debt that older generations never had to experience. What would you do to help those in debt repay their loans or those considering higher education, even if they can’t—or don’t want to—participate in your National Service Plan?

McGrath: “First thing we need to do is get the Department of Education working again. We have a debt relief—federal debt relief program. It’s already there. Betsy DeVos has rejected 99% of the applicants to that program. There’s no reason for that. There needs to be robust oversight, and we need to be standing up and saying, ‘What’s wrong with this program if 99% of the applicants are?’ So that’s the first thing I would do. I touched on the National Service Plan, that’s an idea that extends beyond the military … that, to me, is a very viable program because it would be one for one, serving back to your country. But, also, making sure that the federal government invests in colleges and universities. If you pull the string on why college debt has gone up and up and up over the last 15 years, it’s because we, under Mitch McConnell, we have not invested in colleges and universities at the same rate we did 20 years ago.

We haven’t invested in research and development. We haven’t put federal dollars into education, into colleges. And what have colleges had to do? What has NKU had to do? They’ve had to raise the tuition rates; they’ve had to dump that onto their students. So in my mind, let’s change that. Let’s have the federal government help colleges and universities. If the federal government can help big business with $500 billion slush fund in the middle of a coronavirus [pandemic], the federal government should be helping colleges in universities. Let me give you an example: the HEROES act that the House passed had, I think it was, like, five times the amount of money for education than Mitch McConnell’s little—I call it teeny, teeny tiny—bill that he put. I’m not even sure he had any money in there. That’s the problem right there. We’ve got to get leaders that understand that we need more federal resources for colleges so that we can keep tuition rates down.”

TN: In May of this year, NKU nursing student Kelsie Small died in Louisville due to gun violence. What measures would you put into place to help prevent gun violence from claiming more lives while also supporting farmers and hunters who rely on guns for their needs?

McGrath: “Yeah. Well, I think the first thing that we need to do is—first of all, I’m pro-Second Amendment. I’m a gun owner. My husband’s a gun owner. I think we need to close loopholes in making sure that background checks for all weapons … Why is that so important? Because we need to keep guns out of the hands of people who could harm our children and our communities. Most Americans, by the way, are, like 90%, are for better background checks. So, I think that’s the start. And, unfortunately, we have a senator who won’t even, again, that’s one of the things that’s sitting on his desk. He won’t even debate it. How is it that something that 90% of Americans are for, we can’t even debate on? Again, this is the exact reason why we got to get rid of Mitch McConnell. So that that would be a start in my mind.”

TN: There are over 60,000 cases and over 1,000 dead from coronavirus in Kentucky alone. How would your 9/11-style commission, as described on your website, help mitigate the suffering for Kentuckians now, and how would it help prevent the next pandemic?

McGrath: “Well, first of all to help [alleviate] the suffering from Kentuckians now we need more aid. Okay, so that’s not the 9/11-style commission. The 9/11-style commission is what I call an after action report. Those of us that have served in the military, anytime we did a mission, you don’t just go home at night. You figure out what went wrong and what went right in the mission. And I think you could say, viably, we could all say there’s a lot [sic] went wrong here. How is it that a nation that has 5% of the world’s population has 25% of the world’s COVID cases? How do we have one of the worst trajectories of COVID?  I think you got to have that 9/11-style commission to make sure we don’t have this happen again.

So, let me give you an example of things I would do differently. Mitch McConnell cut the Centers for Disease Control and the National Institute of Health, the very pandemic response portion of that, he cut it to save a dime. In my mind, that’s like pulling the battery, the double A battery, out of the smoke detector. You want to save that $2, so you pull it out. Meanwhile, the house burns down, you come in with the fire department, you start saying ‘hey, I’m here with the fire department.’ It wouldn’t have, maybe, stopped the fire. But it would have warned us. He [sic] don’t wanna do that. I do. He let the National Stockpile for protective equipment deplete. How can you be the leader of our country, or one of the leaders of our country, and let the very National Stockpile of strategic equipment deplete? For somebody who’s been in the military, I know a little bit about logistics. I know a little bit about that. So, we got to fix that.

How about the fact that we have a public health system in this country that is completely underfunded? And then, frankly, how is it that we have the leaders of our country politicize wearing masks? Okay, basic things like that, we have to do this better. One of the things I want to do is make sure that we have the leaders of the Centers for Disease Control and the National Institute of Health, maybe they shouldn’t be working at the pleasure of the President. Maybe they should be more like the Fed, so that they’re not politicized. Does that make sense? These are some basic things. That’s what I’m talking about. We need a 9/11-style commission to look at how we got here and to make sure that this never happens again. I talked a little bit about making sure that we revamp our health care system … We have a health care system which ties, a lot of your health insurance is tied to your employment. Well, how’s that work when you lose your job in the middle of the pandemic? You know, maybe we ought to have some other options out there. That’s why I like an Uncle Sam plan. A nonprofit government option that everybody could have that’s not tied to your employment. And if you want it, you can buy it. And if you got kicked off your job in the middle of a pandemic, from no fault of your own, and you can’t afford it, guess what? Uncle Sam could then subsidize the Uncle Sam plan for the life of the pandemic. These are basic things. I think we need a commission to take a look at all of these things so that we don’t have this. 200,000 deaths, six months. At the height of World War II, we were losing 250 Americans a day. We’re losing 1,000 Americans a day. So, yeah, we got to do some things differently.”

To request an absentee ballot in Indiana, click here. Mail-in ballots must be requested before 11:59 p.m. Oct. 22