Plus: SGA election results for spring 2019 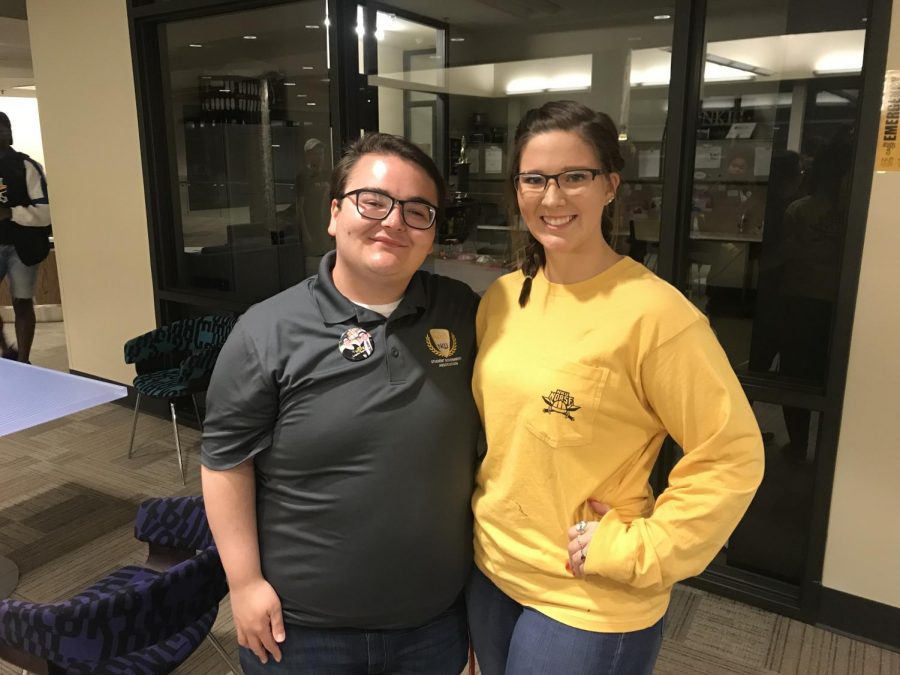 Jarett Lopez and Shelby Sanford will be Student Government Association president and vice president for 2019-2020.

Jarett Lopez and Shelby Sanford will be NKU’s next Student Government Association president and vice president.

Lopez serves as the chair of SGA’s Academic Affairs Committee, and Sanford serves as an SGA justice.

The pair ran on key academic points, including an initiative that would eliminate the A-, as well as expanding mental health and legal services available on campus.

Other notable points of the Lopez-Sanford platform are extending Student Union dining hours, bringing state lawmakers to NKU and creating a legislative liaison position to bridge the gap between NKU and Frankfort.

After the announcement in the Student Union Thursday night, junior political science major Lopez said he was “honored that the NKU student body chose me and Shelby to lead them.”

For Lopez and Sanford, the next priority is getting set up for the coming year, and to finish the work on their “ending the A-” policy first.

“That’s definitely already in the process, so I think it’s important that we step up and get that done really fast,” Sanford, junior public relations major, said.

Lopez is no stranger to creating academic initiatives. As an SGA senator, he wrote a resolution for an Academic Excellence Committee for students, faculty and staff to create courses and programs. His honorary resolution celebrating the fifth anniversary of the Office of LGBTQ Programs and Services was also passed.

As an SGA senator and justice, Sanford notably helped write and pass a menstrual product resolution.

“There was really no tension between anybody,” Sanford said. “ I think it went as smooth as it possibly could have.”

Ladies and gentlemen, your 2019 SGA President and Vice President – Jarett Lopez and Shelby Sanford! ⁣
⁣
Thank you NKU! You have chosen to elevate your voice! pic.twitter.com/kj0l419kVK

Currently, Lopez is lead ambassador for LGBTQ Programs and Services, an ambassador for the Institute of Student Research and Creative Activity and holds positions with Sigma Phi Epsilon fraternity.

Sanford is currently a resident assistant, vice president of community service for Kappa Delta Sorority and holds a position at Biggby Coffee. She has plans to attend Chase College of Law after completing her undergraduate degree.

NKU’s student body president reviews and approves SGA legislation, serves on the NKU Board of Regents, can enter into agreements with other campus organizations and presides over SGA meetings.

In total, 837 votes were cast for SGA candidates in 2019, down about 30 percent from last spring’s turnout. Senator, justice and executive board positions were also on the spring ballot.

(Editor’s note: Voters are not required to select a candidate for every office, leading to different vote totals for individual offices.)