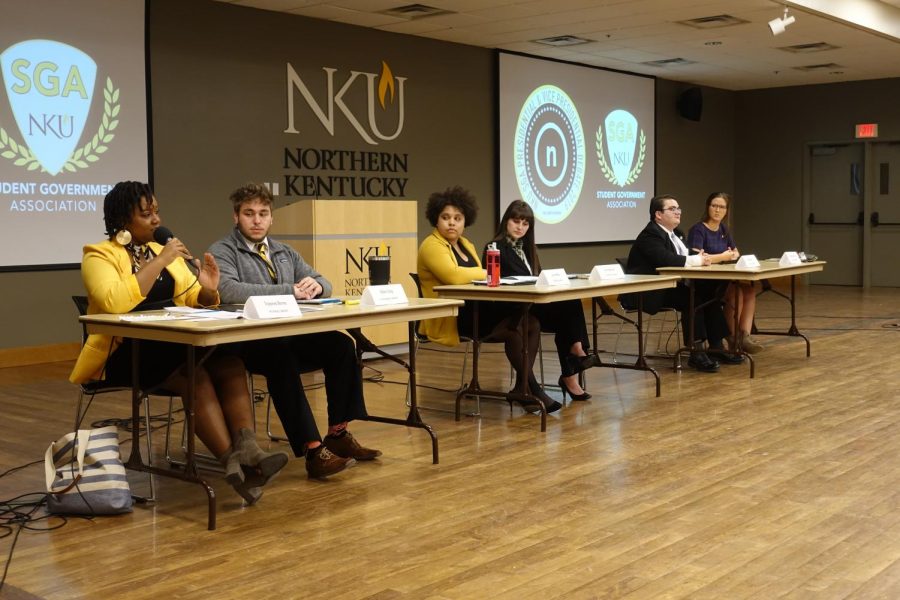 SGA Presidential candidates discuss their platforms at the debate.

Watch the full SGA 2019 Debate hosted by The Northerner on facebook.com/northernermedia.

Lexi Anderson, vice presidential candidate and student coordinator of Norse Violence Prevention, has worked directly with power-based violence, such as sexual assault, stalking and rape. She said the biggest problem she sees on campus is that on-campus resources are not being advertised enough.

“It’s super important, too, to realize how much this stuff actually happens and how big of a problem it actually is,” Anderson said. “We don’t really think about it that much because, maybe, we haven’t been put in that situation or someone that we know hasn’t.”

Presidential candidate Janiah Miller, who is running with Anderson and previously served on the sexual assault student misconduct committee, wants students to be aware of the resources available on campus, as well as opportunities to serve on these types of committees.

Presidential candidate Trayonna Barnes organized “Hold That Weight,” an event in 2017 that allowed survivors and supporters to share their voices about sexual assault on campus.

“I had it for sexual assault survivors on this campus so that they knew that they weren’t alone,” Barnes said. “There are offices that will stand behind you.”

Her running mate Ethan Craig said he thinks sexual assault is an issue that affects everyone on campus. He is meeting with the vice provost to discuss changing Haven, the current online training system for sexual violence for first-time freshmen.

“[The new system is] not something you just click through,” Craig said. “It’s something that’s important to, not only us, but it should be important to everyone on campus.”

Presidential candidate Jarett Lopez said sexual assault has been a problem on campus since his freshman year in fall of 2016.

His running mate Shelby Sanford said she would probably only feel comfortable reporting an incident to the same gender, and that others may feel the same way.

“I think we have to have more diverse individuals at the top for people to report these things to because you have to feel comfortable and you have to relate with the person that you’re going to talk to,” Sanford said.

On one thing, all candidates agreed: students must be their own frontline advocates in the Kentucky.

“We need to tell our governor that our education isn’t something to gamble with,” Miller said. She suggested taking students to “Lobbyist Days” to meet with legislators in Frankfort and Washington, D.C.

Sanford said student interactions with lawmakers must go beyond the yearly Rally for Higher Education, which buses students to Frankfort each February with student governments at schools across the commonwealth.

At just over 50 years old, NKU is a young state university, which Lopez said contributes to its “chronic” history of underfunding.

“We always get the short end of the stick, but it doesn’t have to be that way. We have to leverage our relationships in Frankfort,” said Lopez, who interned for NKU’s Kentucky State Senator Wil Schroder.

“We need to address this pension crisis head-on, because this is going to hurt us tremendously if we continue to get things cut,” Miller said.

Aside from the funding dilemma, Lopez also endorses a statewide fairness ordinance, which has been enacted in Louisville and nine other Kentucky cities. The ordinance offers increased protections against discrimination.

Likewise, Barnes suggested that more vulnerable populations, like members of minority communities, low-income students and other non-traditional students, must be SGA’s priority at the statehouse.

“I don’t believe in covering student’s voices; we believe in the capability of all students [to be advocates],” Barnes said.

But it’s important to keep strengthening Frankfort ties on the administrative end, she said.

“We also need to think about how to better the relationship between NKU and the legislators,” Barnes said.

Could solar panels top the newest campus residence hall? Sanford thinks it could be a viable solution to powering parts of University Housing.

“If we could have our Housing buildings run on some form of solar energy—maybe not entirely but at least partially—that could reduce the carbon footprint of our campus immensely,” said Sanford, who, as a resident assistant, said she has had preliminary conversations about the new facility with Housing Director David Berland.

Lopez also said he is speaking with an environmental science student on a plan to increase the amount of produce and meat served in NKU Dining that comes from fair-practice, sustainable sources. Paper and plastic waste could also be reduced, he said.

Miller said more recycling signs and zero-waste practices are a start, but educating students on the importance of waste reduction is paramount.

“Without the educational aspect, people won’t really care,” Miller said. “I feel like oftentimes people throw whatever in recycle bins.”

Miller also suggested there should be a community garden to combat student hunger, suggesting it would make up the gap where on-campus food pantry FUEL NKU falls short.

There is a community garden at NKU located near the log cabin across from the former Honors House, which has partnered with Chartwell’s and is part of a collaboration with two other gardens by Callahan Hall and on Johns Hill Road. Students, faculty and community members are currently able to adopt a plot to grow their own food.

Barnes agreed with Sanford that the new student body president should work with Housing: “they are here the most, they would know how people are dealing with [recycling].” She also agreed with Miller that eco-education is key: “we need to know the ‘why,’ why we are recycling.”

Barnes and Craig promised before the debate on social media that one of their core values was pushing for better mental health on campus. They originally said on their Instagram account that they would dedicate two SGA meetings a year to “promote positive mental health” and explore ways for students to have more confidence in their university life.

At the debate, Barnes elaborated on her plan, saying that her plan to promote mental health was by “lead[ing] by example” and taking the day off of SGA and cancelling meetings, then tweeting out positive statements for students on campus.

Sanford says she wants to increase diversity in Health, Counseling and Student Wellness by representing underrepresented minorities and LGBTQ+ students who are seeking out services.

“We want to see people of color as our counselors so that students have someone to relate to when they go to those centers,” Sanford said.

With 85 percent of NKU students living off-campus, candidates had different ideas for bridging the involvement gap.

Miller and Anderson suggested hiring a full-time commuter director in the Office of Student Engagement, something she said the office has been after for years.

“If a commuter director can increase participation on campus, strengthen our community and strengthen our student experience, it is worth investing in,” Miller said.

But in light of funding cuts, Northerner moderators asked, is hiring another full-time director possible?

“As a regent, you are able to work with other regents to figure out what the budget will be set for within the upcoming school year,” Miller said.

NKU’s Board of Regents approves the university’s annual budget compiled by a combination of university administrators. SGA presidents serve as the board’s student regent during their term.

NKU’s student body president reviews and approves SGA legislation, serves on the NKU Board of Regents, can enter into agreements with other campus organizations and presides over SGA meetings.

Chief Justice Travis Roy is serving as the 2019 elections commissioner. The rest of the executive board positions and senate will also be on the spring ballot.

SGA spring elections will be held online on MyEngagement on March 27 and 28.