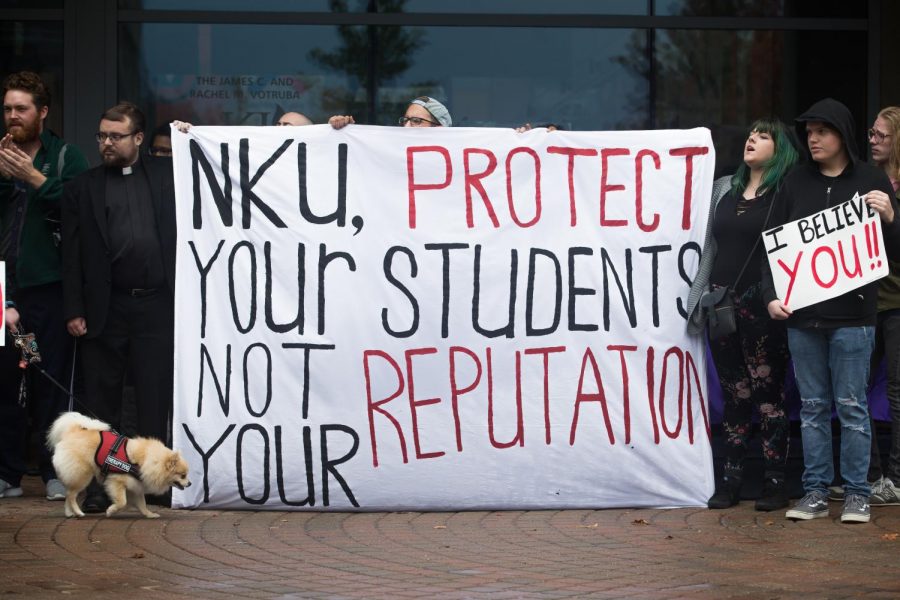 Students gathered at the “Hold that Weight” rally, which was meant to provide a space for survivors of sexual assault.

“NKU PROTECT YOUR STUDENTS, NOT YOUR REPUTATION,” read a sign, words painted in bold black and red lettering backdropped by a white bed sheet.

They stood in front of the Student Union, some carrying their own signs of affirmations: “Me too,” and “I believe you,” and “Violence affects everyone.” Behind them laid a blue dorm mattress, which students carried through campus: a symbol of the Jane Doe case, a lawsuit filed by an unnamed student against the university last year for mishandling her sexual assault case.

“If you see something, say something,” said sophomore social work major Trayonna Barnes, who also helped coordinate the “Hold that Weight” rally.

The event, held on Oct. 24, was described on their flyer as a collaboration “with survivors and supporters to speak out against sexual assault and frat rape on campus.”

She said the latter was a reference to Jane Doe, whose perpetrator was reported to be a fraternity man.  Barnes said, however, that it was a call to action to all students and administrators, not only the Greek community. The rally itself focused on giving survivors and supporters a voice.

“Survivors, this rally is for you,” Barnes said. “You have a beautiful voice. I encourage you to use it.”

A wide circle formed around her; some faces downcast, others upturned, serious. Despite the windchill, an estimated 100 attendees made up the crowd.

Barnes said that the rally was aiming to bring more awareness to sexual assault. She added that it was not a protest against NKU, but rather a space for survivors and supporters to come together and stand against sexual assault.

Project H.O.P.E, which operates under the Norse Violence Prevention center, was involved as well. Hali Wagner, a junior political science major and president of H.O.P.E, said that many students feel as though NKU has protected its reputation rather than its students.

If those affected by sexual violence are given a place to speak out and have supporters actively backing them up, Wagner said they will feel better about expressing themselves.
“They feel like they are on their own island and that no one will come rescue them,” she added.

Mic in hand, speaker after speaker voiced their thoughts, displaying their emotions and convictions to the crowd. Curtis Sheppard spoke first, both as a perpetrator and a victim.

“Most perpetrators are afraid of the light of exposure–that’s why they get you threatened, call you bad names, why they tell all their friends about you, that you’re no good and you did it anyway–so I suggest today, and everyday forward: Men, women, today is your day to not offend again, even if you choose to not apologize. Today is the day we’d like to put you on notice,” Sheppard said. “If you do that shit again, your name will be blasted across social media.”

A couch covered in names sat behind students holding the banner, later to be filled with more signatures. It belonged to the K.A.S.S.I.E (Keeping All Survivors Safe, Informed & Emancipated) Project, whose purpose is to encourage survivors to start sharing so they can begin the healing process into life after abuse.

“We internalize it a lot, so the whole idea of saying ‘hey, this happened,’” Khrys Styles, the founder, said. “Get it out there. Put it out there, so you can start relieving yourself of the guilt and shame. You connect with people who are like you.”

Survivors are having more courage to come out instead of being in the shadows where they’re taught to be.”

Styles started the project five years ago, named after her friend who she lost to domestic violence. As she spoke at the event, students lifted the mattress from behind and threw it into the middle of the plaza.

“There are so many times we have been violated on one of those,” Styles gestured toward it, face streaked with tears, “a campus mattress.”

On the mattress, she said they were going to write “Stop raping us.” She asked the crowd to repeat the words.

Twenty years ago, Styles said she was a victim of rape as well on campus by a member of a fraternity. Back then, she didn’t say anything to anyone.
When she first spoke to Barnes about forming the event, she said she asked why, as a society, we protect rapists. That’s what society is doing, she said.

“Survivors [male and female], don’t grow up to be like me,” Styles said, pausing. “There is life after abuse and if you start talking now, if you start sharing now, you can start healing and keep on living. But first, forgive yourself because you didn’t anything wrong.”

Some attendees listened the whole time, while others wandered by as they walked through campus. Scanning the crowd, onlookers wiped away their own tears, a scattered few hugged the friends beside them.

The rally, she said as her voice broke, was for her too. Styles added that it’s not only fraternity members doing it, but people everywhere.

“Listen to me. Hear me. Believe me. Please, students of NKU if something happens to you, tell. Scream it,” Styles said. “And remember, as you leave this place: I am not my previous abuse. You are not your abuse.”

According to RAINN, out of 1000 rapes, 994 perpetrators will not be incarcerated. And, among undergraduate students, 23.1% of females and 5.4% males experience rape or sexual assault during college through physical force, violence or incapacitation.

Despite there being controversy around the rally because of the flyer’s usage of “frat rape” among Greek life chapters–some asking members not to appear in their letters–members from various fraternities and sororities spoke.
Emily Borst of Theta Phi, joined by three others–Kaitlyn Evans of Phi Sig, Chris Riehl of TKE and Grayson Yaden of Theta Phi–said though their organizations have different creeds, colors and letters, “one thing holds true across the board: we are members of valued organizations,” adding that their founders saw injustice in the world and formed organizations to speak out.

Riehl cited that fraternity men are three times more likely to rape than other men on campus; the data comes from a study published in 2008 by NAPSA, or Student Affairs Administrators in Higher Education. Riehl said that as members of Greek life, they have an important role in creating “a culture of consent.”

“The campus needs this now. I don’t think it’s happening more on campus,” Barnes said. “I think it’s being talked about more. Survivors are having more courage to come out instead of being in the shadows where they’re taught to be.”

Afterward, students didn’t automatically disperse. Many went up to Styles and other speakers to share their stories, their thoughts and hopes. Some signed the couch in purple ink, the organization’s color.

Later, when asked what message she would want to extend to the NKU community, Styles said that if you are a survivor of sexual or domestic abuse, you’re not alone.

“You always have my support and the support of tons of other survivors to help you make it through,” Barnes said. 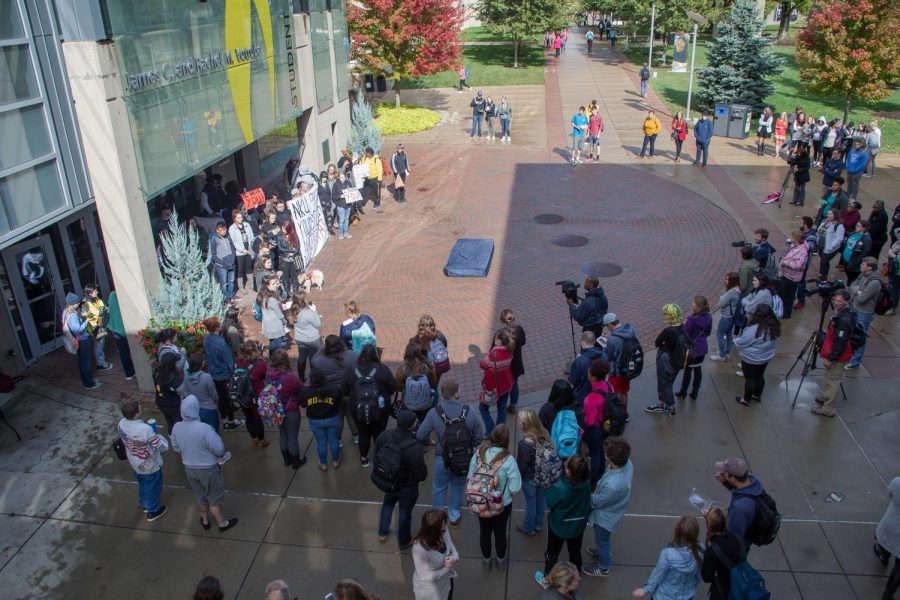 Gallery|6 Photos
A crowd formed around the rally, some stopping by and others stayed the whole time.