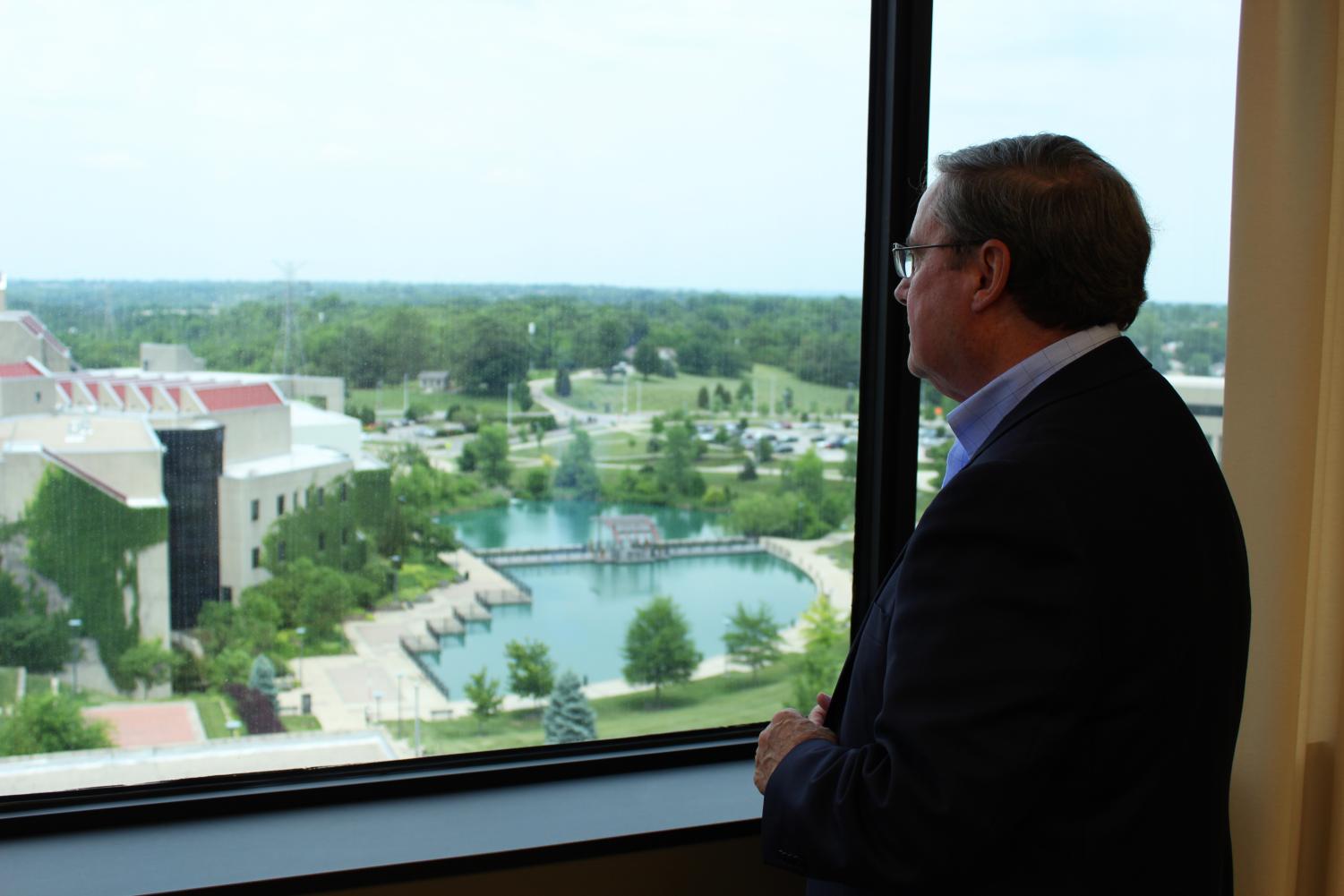 Behind NKU interim president Gerard St. Amand’s desk hangs a large print given to him by his wife, Peggy, when he served on active duty in the Army in Bosnia.

The print is Arnold Friberg’s “Prayer at Valley Forge” depicting George Washington kneeling with head bowed beside his horse on an amber-bathed winter morning. Now, situated on the east wall of the president’s office suite in the Lucas Administrative Center, Washington faces NKU and a hazy Cincinnati skyline.

The print followed St. Amand from Bosnia to the Pentagon, to the Judge Advocate General’s (JAG) School and to NKU, where he became Chase Law dean, vice president for university advancement and interim president.

No matter how trying or tough it was to serve as a colonel, JAG lawyer, school commandant, professor or dean, St. Amand said he would look at Washington to remember that what he was going through “was no Valley Forge.”

Like Washington, the central thread of St. Amand’s career has been what he calls “semi-accidental” leadership and service. Throughout his time in the military and in higher education, he always stepped up to fill a need, even when he least expected it.

From combat boots to textbooks

St. Amand didn’t know any lawyers growing up in South Holyoke, Massachusetts, where money was tight and everyone around worked a blue collar job. Still, he knew he wanted to become a lawyer like the ones he admired on television, those that sparred with wit and words as they battled in the courtroom.

His father and uncles served in World War II, and after high school St. Amand earned an appointment to the U.S. Naval Academy, but changed his mind just 30 days before he was to start. Using his R.O.T.C. scholarship, he instead attended Boston College, where he would earn a bachelor’s in math and economics, as well as his law degree.

He told himself it would be a quick four years plus law school before he was out of the military and starting his private practice. But after experiencing the razor-sharp focus and drive required of military men and women, St. Amand knew he was right where he belonged.

“The Army recruited a lawyer, but they retained an officer,” St. Amand said. He would serve for nearly 25 years.

He served on active duty in Europe, became a legal advisor for the Department of Defense and commandant for the Army JAG School in Charlottesville, Virginia. It was there where he realized he wanted to help shape the next generation of young legal minds.

“I had a vested interest in making sure the legal profession stayed strong,” St. Amand said.

He never expected to get into higher education but took the advice of a buddy, an Army Reserve lawyer working at the University of Louisville, who suggested considering a law school deanship.

Later, as St. Amand began looking into law schools around the country, he met with NKU’s fourth president, James Votruba.

“I remember sitting in this room with him,” St. Amand said motioning to what is now his office, “and I said, ‘I’m not looking for a job at the moment. I love the military, I feel a deep commitment to it.

“‘The only way I’m gonna leave now rather than four, five, six years down the road is if I find that there’s a great leadership opportunity in an organization that I believe I can commit myself to and believe in as much as I believe in the Army.’ He convinced me that this was that kind of institution.”

St. Amand retired as an Army Colonel to become dean of the Chase College of Law in 1999, where he assumed he would remain until the end of his career, perhaps teaching a few years before he retired.

“But again, Jim Votruba interrupted that.”

In 2006, when NKU needed a vice president for university advancement, Votruba first asked St. Amand to fill the role in the interim and then on a permanent basis. St. Amand served for another seven years before returning to Chase to teach, which he especially enjoyed.

“I was teaching first years at the time,” St. Amand said. “You got brand new law students, they’re full of enthusiasm, they have a vision for doing good.”

Then, in 2017, Board of Regents Chair Rich Boehne called to ask a favor.

A voice in Frankfort

Navigating the position of interim president was its own challenge, but St. Amand regards the seemingly imminent budget cuts coming from an especially tense state legislative session to be the greatest challenge.

Before Governor Matt Bevin recommended sweeping cuts to programs and higher education in order to support a woefully underfunded pension system in January, St. Amand was told to expect the worst.

With costs rising at every turn, the potential impact was a sobering $20 million.

“That, for me, was staggering,” St. Amand said. “That was the one thing, not the dollars, but when you took those dollars and you translated them into what that means in terms of impact for an institution where 90 percent of our discretionary dollars is people, that means we’re talking about a lot of people.”

“That’s the one thing that kept me having a hard time sleeping at night.”

St. Amand brought these concerns to lawmakers well before the session began, and then spent a large share of the spring in Frankfort continuing to advocate for relief from cuts.

“When you’re getting in there to talk to legislators, waiting rooms are just populated with lobbyists of all types from throughout the state, sometimes large groups of people carrying signs and protesting and screaming and hollering,” St. Amand said. “Access during the session becomes more challenging.”

During that “rollercoaster” session, a bill to allow NKU to exit the state pension system passed– then was vetoed. Thanks to another last-minute bill, NKU’s pension contribution is frozen until next year.

“We hammered hard with the House, and we said we’re being double-taxed here,” St. Amand said, explaining the cut funds the pension system despite NKU already buying into the system unlike other state agencies.

With jobs, departments and tuition on the line, St. Amand said the year ended “okay.” He believes one of the challenges NKU will continue to face is retaining talented faculty and staff during uncertain fiscal times.

“When you have a workforce that’s facing that [anxiety], talented people begin to look elsewhere for opportunities that may be more secure,” St. Amand said.

“We ended up in a good position this year. The state does not have an answer for next year, yet.”

Sixth president Ashish Vaidya takes the reins starting July, and St. Amand is more than confident that the university he served for nearly 20 years is in capable hands.

“I’m respectful of the fact that but he’s not a neophyte stepping into the presidency for the first time, and I more or less just provide him observations about this landscape and some of the places here that some of the pitfalls might be,” St. Amand said.

One of the most rewarding aspects of the presidency is the opportunity to meet students and send them off into the world, St. Amand said. He especially loves those convocations and awards dinners where he can quietly beam at the accomplishments of NKU students.

“You sit there listening while all of these awards are being presented and you think ‘my God these students are doing all of that?’ It makes you feel like a real slug,” St. Amand joked.

“You can see that that’s the next generation, and it kind of gives you a greater sense of confidence that we’re going to be okay and that somehow after I’m long gone at this place is still going to be going pretty well.”

Still, he said, leaving NKU will be bittersweet.

“It’s pretty heavy because as I look back, in my professional career in both the military and here, I do have a good sense of accomplishment,” St. Amand said. “I feel good about having made a difference, but suddenly you think ‘man, it’s over. It’s done now.’”

He leaves the president’s office June 30, Washington print in tow. Next, it may hang in his home in Charlotte, North Carolina, where St. Amand looks forward to more time with his grandchildren and two sons, Matt and Jim, of whom he is most proud.