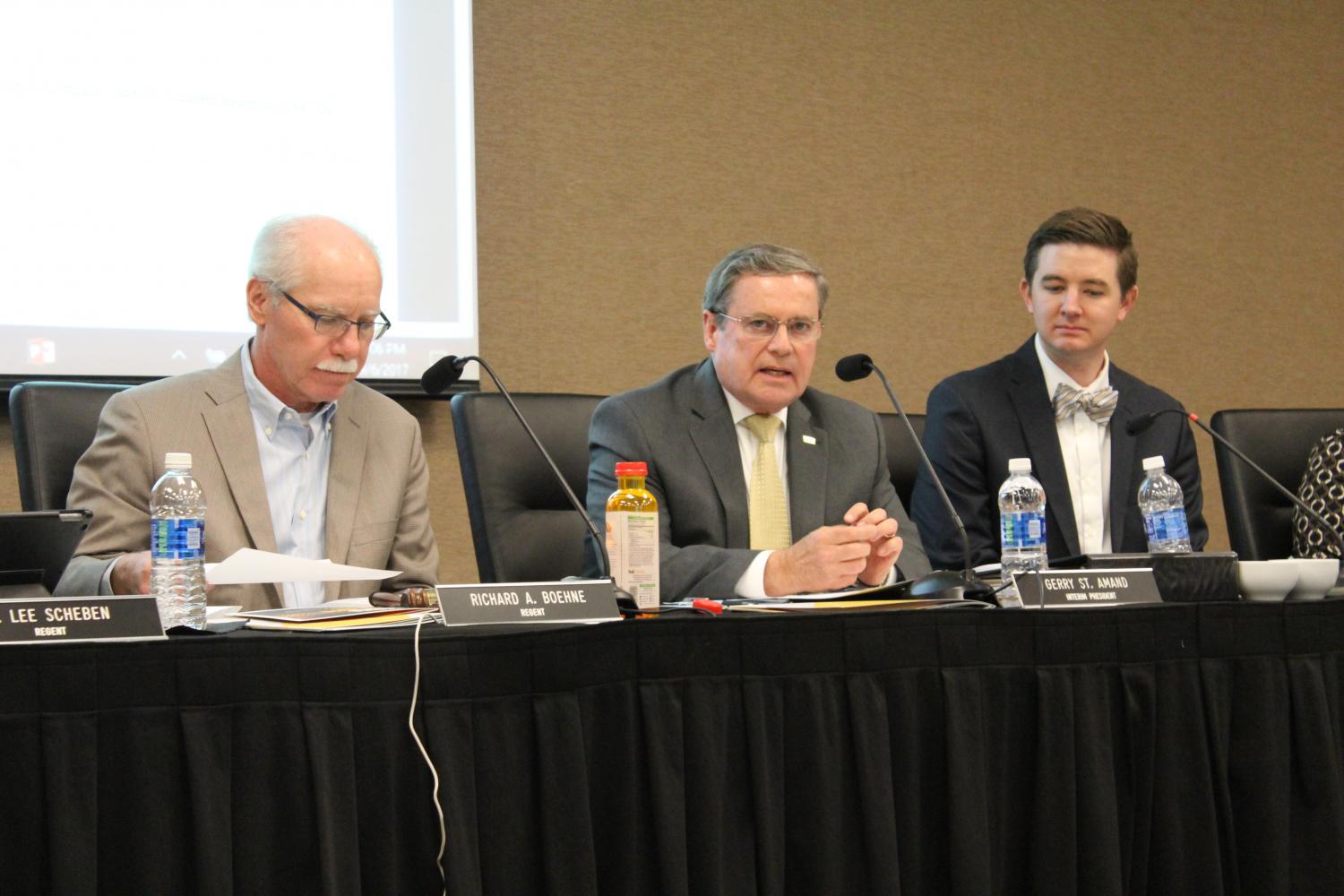 Gerard St. Amand, center, at a Board of Regents meeting Sept. 6. A bill passed April 26 that freezes NKU’s pension contribution rate for one year.

The rate freeze means NKU’s projected $20 million budget shortfall will be cut by more than half. NKU will only pay $18 million into the Kentucky Employee Retirement System this fiscal year.

Employees’ retirement and benefits are unchanged for the time being.

At a Board of Regents meeting Wednesday, St. Amand said the freeze buys NKU and legislators more time to fix pension issues.

Because the bill only freezes the rate for one year, the $31 million payment still looms large. NKU, incoming president Ashish Vaidya and lawmakers must devise a solution by then.

“This relieves significant budget pressure for the coming fiscal year, while still presenting us with a potential challenge in the second year of the biennium,” St. Amand said.

NKU cannot raise tuition by more than 4 percent for fall 2018.

The Kentucky Council on Postsecondary Education approved a two-year tuition cap at 6 percent on April 27, ruling that state universities cannot raise tuition by more than 4 percent in a year.

This is not a recommendation for how much NKU should raise tuition; the council in coordination with most state university presidents sets the limit for how high tuition can rise.

“This two-year cap provides us greater knowledge and flexibility to plan more effectively beyond just one year as we assess how to manage the myriad of budget pressures we still confront this year and next,” St. Amand said.

As far as the $31 million: The Council on Postsecondary Education must decide how much in performance funding will come NKU’s way.

The recently passed two-year budget includes a recurring 6.25 percent cut to Kentucky universities, $3.2 million for NKU. However, St. Amand expects NKU will receive $5 million in performance funding to cancel out the cut.

“We won’t know the specifics of that performance funding allocation until next month,” St. Amand said.

The final tuition decision will be made at a special regent’s meeting May 17. A budget address to present the university’s financial situation will follow May 18.

The new Health Innovation Center, slated to open this fall, will also put a great strain on operating and maintenance costs.

“Our projected fixed cost increases will be about three times what they tend to be in an average year,” St. Amand said.

In an email to campus Monday, St. Amand still referenced “a strong interest” in faculty raises, even amid rising fixed costs.

“I estimate that these could be less than half of the $20 million range that we had feared,” St. Amand wrote in the email.