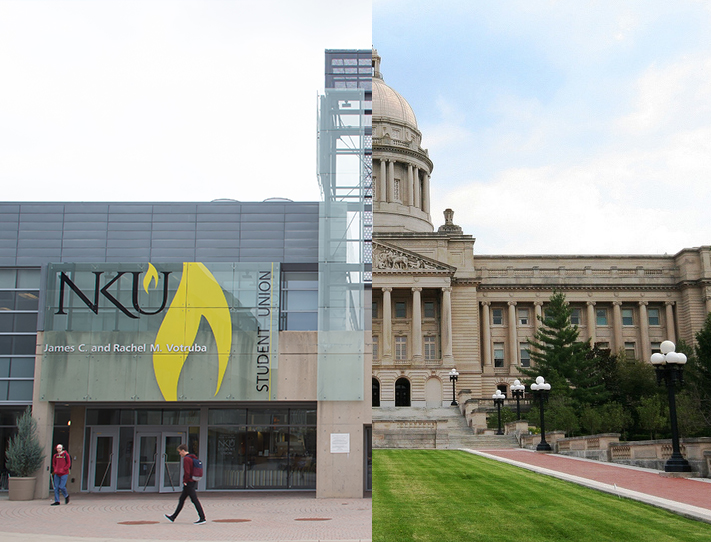 UPDATE April 11: Governor Matt Bevin signed pension bill SB 151 Tuesday night. Kentucky Attorney General Andy Beshear said he has filed a lawsuit against the bill because it breaches an “inviolable contract” with state workers, according to the Associated Press.

While the state cut less than administrators feared, the price of pension and other pressures threaten to hurt NKU next semester.

The Kentucky legislature passed its final budget and a pension reform bill that leaves NKU in the black with more performance funding. But, it’s the unchanged pension cost administrators worry will send the university into the red.

The 2018-2020 budget cuts $3.2 million in NKU state funding over two years, part of a 6.25 percent cut for all Kentucky public colleges and universities.

The addition of $31 million in performance-based funding for Kentucky universities cancels out that cut, and another $38 million is coming in 2020.

Interim president Gerard St. Amand said in an email to faculty that he expects NKU to receive $5.1 million, meaning NKU will net $2 million.

In 2017, NKU received roughly $2.7 million in performance-based funding based on student success, number of credit hours and quality of student support programs.

The budget guarantees full funding for the Kentucky Center for Mathematics housed in Campbell Hall. The KCM would have been forced to close without $1.3 million in funding, executive director Dr. Dan McGhee told The Northerner in March.

Legislators have the power to override the governor’s vetoes. Whether Governor Matt Bevin signs it or not (he tweeted a statement opposing the bill), the new budget could be final. Bevin has until April 14 to decide.

The state budget includes a provision that allows public universities to fire tenured faculty when modifying or eliminating programs during a financial emergency. Those fired would get 10 days notice.

NKU already has procedures in the faculty handbook to remove tenured faculty, and St. Amand said the law does not change the university’s tenure rules.

“We have no plans to change how we handle such situations,” St. Amand wrote in the email.

The legislature’s pension bill, Senate Bill 151, has no effect on this year’s pension payment, which will rise to $31 million from $18 million in 2019.

The cost of maintaining the Health Innovation Center and other rising fixed costs brings the total impact as high as $20 million.

“Therefore, as we plan our budget for 2018-19, we are still planning for this nearly $13M pension impact,” St. Amand wrote in the email to faculty.

The pension bill does offer a 401(k)-like plan that employees pay into and employers match by 4 percent called a “hybrid cash-balance plan.” The plan, optional to current employees, would be required for staff hired after Jan. 1, 2019.

Initially about wastewater services, language was added to SB 151 from pension bill SB 1. In a matter of hours, it passed the House and Senate on March 29.

Could NKU leave the pension system?

House Bill 362 might allow NKU and other public universities to leave the Kentucky Employee Retirement System (KERS) which currently covers 700 NKU staff. Though the bill was vetoed, it is not dead yet.

Under HB 362, if NKU declared intent to leave the system by June 30, staff would be moved into 401(k)-like plans and would continue to collect KERS benefits into 2019.

Then, NKU would start paying off its pension debt without interest over 30 years at a lower rate.

The governor already vetoed HB 362, but St. Amand said he is hopeful legislators can override the veto.

“All evidence to date points to this bill offering the best and only option to avoid the pending drastic increase in our pension costs that will have serious consequences for our workforce,” St. Amand wrote.

While KERS covers 700 NKU staff, the other 800 faculty and administrators already pay into 401(k)-like plans that NKU matches to a fixed percent.

“With a few days still left this session, we are hopeful legislation will come forward to give NKU options to avoid that increase,” said Adam Caswell, government relations assistant vice president.