‘Now or never’: One woman’s fight to halt MS 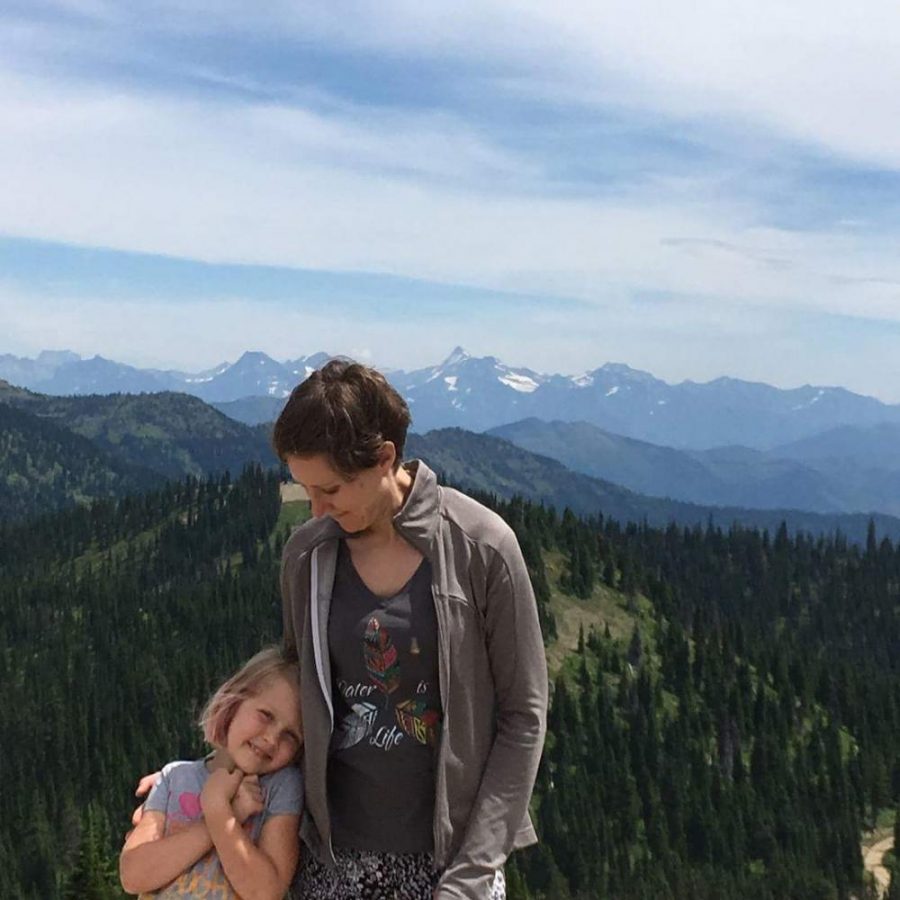 Koenig said her daughter is tough, like her momma.

Jen Stansbury Koenig ran her hand over her freshly shaved head, hair shedding onto the off-white tablecloth below. She said she wanted to do it before she began chemo, worried large clumps of hair falling out may scare her child.

Her 7-year-old daughter, Adelaide, came into the dining room, still coming down from post-birthday party excitement. Looking up at her mother, she smiled widely.

“I power through because I’ve said since day one that I don’t want to lay down with this disease,” Koenig said.

“And you don’t want to end with the disease,” she said, finishing her mother’s sentence.

39-year-old Koenig pauses and smiles at Adelaide, who pulled up a chair to the dining room table before migrating on the floor to play with a dollhouse.

Koenig said she experienced symptoms dating back to high school. In 2009, while working at  NKU as a Grant Facilitator in the College of Education and Human Services, her left arm went numb.

On February 3, 2010 she was diagnosed with progressive Multiple Sclerosis. The next day she found out she was pregnant.

“We had just started talking about having a family,” Koenig said. “‘How do I bring kids into this world if there’s a chance you could pass it on?’ The next day my husband said, ‘Well, what if you already are pregnant?’ I bought a test and sure enough, I was.”

Because of the pregnancy, symptoms related to MS were put into remission. For three years, she was able to function normally: she took her daughter to the zoo, practiced yoga and was able to live a relatively active lifestyle. Her doctor, however, recommended she start taking medication. The weekend she began Tecfidera, in 2013, she went on a five-mile hike in Red River Gorge. By the next week, she was declining. 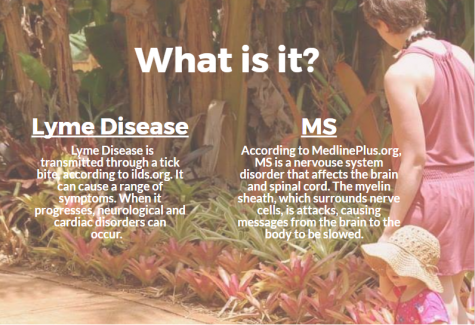 “You’ll see commercials of this woman hiking through the woods with her backpack–she’s cruisin’ through the woods,” Koenig said, laughing shortly. “Well, that was me when I started Tecfidera, but it made me worse.”

She switched to another medication, Tysabri, after a year in hopes of a change. When there was none and she continued to get more lesions, her primary physician pushed her to get blood work done. After finding out she tested positive for Lyme disease in January 2015–she carried 6 out of 8 antibodies–she quit the medication altogether.

The MS, an autoimmune disorder, was likely triggered by Lyme disease. The revelation was also key to understanding why the medication she was taking was making her worse: in treating MS with medication, her immune system was suppressed, thus allowing Lyme disease to take hold.

On the week of her birthday in late April of 2016, she picked up an NKU magazine. Inside, was a story of a student who was treated for MS by Dr. Richard Burt at Northwestern University Memorial Hospital in Chicago. At first, she hesitated to read it— “everyone’s experience is different”—but when she did, she felt like the treatment could work.

Soon after, she sent her MRI reports to Burt’s office and visited him in July the same year.

She entered the trial, at the time covered through insurance with NKU, where she worked for 11 years and was also both an undergrad and graduate student. The doctors took one look at her walking and said: “you’re more than eligible.”

The treatment, known as a hematopoietic stem cell transplant, or HCST,  begins by collecting some of the patient’s cells, and wiping out their immune system by lowering white blood cell count through chemo. Once lowered, their own healthy stem cells are reintroduced to their system and reboot the system (minus the bad messages).

Before going on, however, she first had to go through additional testing to make sure her body was strong enough for the transplant. Later, Humana would require even more testing beyond what the trial had asked for, including mental health evaluations and 29 vials worth of blood tests.

At the time, she began working at the University of Cincinnati, which provides Anthem insurance, but was still covered under NKU’s plan until the end of the month; her husband, Andy, also works at NKU, and she was covered under his plan as well.

Anthem, which didn’t kick in until November,  denied her. On a letter dated Dec.1, 2016 Humana approved her to go forward with the treatment.

“I was floating on air and then there was this weird time period where Northwestern closed enrollment in the clinical trial in July,” Koenig said.

On Dec.8, she received another letter: After thoroughly reviewing the case’s information, they reversed their decision. She was denied.

A spokeswoman from Humana, located in Chicago, said in an email that though they can’t release patient information, she could share that Koenig is “covered through a group medical plan for which Humana is a third-party administrator.”

In order for Burt to get the HCST treatment approved by the FDA, he first had to move out of the trial phase. Though the trial stopped accepting new patients, they agreed to treat Koenig on a “compassionate care basis,” which kept the same protocols and plan.

“Experimental treatments are not authorized by many plan sponsors (employers) and insurers, as well as, for example, the U.S. Department of Health and Human Services’ Centers for Medicare & Medicaid Services (CMS),” the statement continued.

Similarly, NKU Spokeswoman Anna Wright said in an email that they can’t discuss a specific employee or dependent covered by their insurance plan for privacy reasons.

The statement continued by reiterating what Humana noted: that their insurance is in line with several other employers and insurers “when it comes to covering experimental treatment.”

No time to waste

Koenig thought that if she waited, there may have been a new case for approval. Burt told her that they couldn’t wait on insurance. In a year, she would be so far along in her MS that the treatment wouldn’t help.

Family and strangers alike helped Koenig with finances, which was difficult for her to accept.

She didn’t want to be a burden, she said. She’s also received support through her blog and fundraisers. The latest of which took place in a bar in Covington, The Globe, and raised about $3,600. Online, she’s raised $16,271.

If she had waited, she would have progressed into secondary progressive MS; the medication would cost $200,000 yearly without the hope of improving.

“Why not try to eradicate this? If the disease-modifying drugs barely have a 60 percent rate of helping me or of easing the symptoms,” Koenig said, “why wouldn’t I try to go through this transplant that will eradicate the disease and completely halt it–I’ll never have any symptoms again and I’ll never need medication again.”

Her husband added that even before, when she was taking Tecfidera and Tysabri, it cost her an estimated $4,000 a month, which added up to $60,000 a year.

“In two years, you’re basically there,” he said. “The transplant is supposed to, if nothing else, stop the need for medication. So, you wouldn’t need to take medication forever.”

‘To me, I don’t have another option’

Adelaide said goodnight as her mother gingerly wrapped an arm around her shoulder and kissed her forehead. She leaned in and whispered in her daughter’s ear, “I hope you have sweet dreams; I love you,” as Andy waited by the doorway.

“She doesn’t know what she’s missing out on but I know…,” Koenig said, “There are too many firsts that I don’t want to miss out on. So, let me get this transplant so I can eradicate this disease.”

Koenig and her husband recently came back from a 13-day trip to Chicago for her first round of treatments, including chemo. For each day she was gone, she wrote her daughter a note.

Coming back from the treatment, she can already feel a difference. In MS, muscle tone is often affected. Where her arm usually is clenched, she noticed more control and range in movement. For the first time in months, she gained control and feeling of her toes.

With the treatment working for 90 percent of people, she said she can’t imagine falling in the 10 percent category. With everything she’s gone through, she doesn’t believe life could be that unfair.

She went back for her second round–which will last two-and-a-half weeks–and left behind another set of notes for Adelaide, one for every day she’s not there. October 18 will be the birthday of her new immune system, seven days after her daughter’s.

The other day she said she watched her daughter and husband ride bikes outside. From inside, she kept thinking that maybe by next Spring they’d all be able to go on family bike rides together. They could hike like she used to, or do yoga.

But right now, she can’t; that’s why she’s going forward with the treatment: there’s a life out there she wants to live with a daughter she wants to see grow.

“She’s had to grow up way too fast. She’s brilliant, and she can handle it, but she shouldn’t have to,” Koenig said. “She shouldn’t be worried about her momma falling down because lately, I’ve been falling a lot.”

Each morning Koenig wakes up despite the pain she may feel and resolves to think of the future she will have. Maybe tomorrow, she thinks, she’ll feel better.

“You have to keep going,” Koenig said.  “Like I said, you can’t lay down with it.”
Follow Jen’s blog for updates or donate to her Generosity campaign.