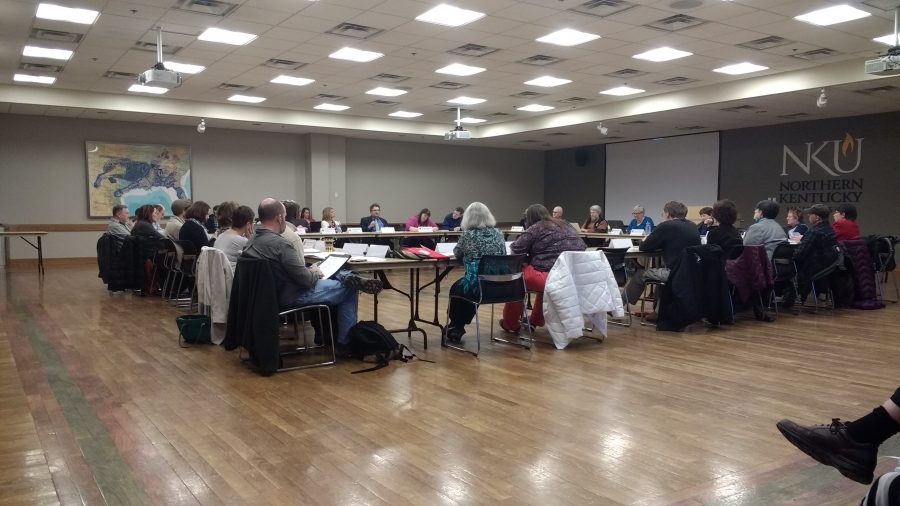 The faculty senate discussed the resolution, among other things, at January’s meeting. The resolution will be voted on Feb. 27, unless tabled for a further date.

The Professional Concerns Committee of the Faculty Senate created a recommended resolution stating that the faculty disagrees with NKU’s decision to seek a gag order against an NKU student.

The resolution passed at the last Faculty Senate’s meeting on Feb. 27. In total, seven voted against the resolution and 26 voted in favor.

Ken Katkin, a Chase Law professor and chair of the committee, said when he first heard of the case he looked into the legal documents regarding it as well as the university’s own documents. He said that, in his opinion, there wasn’t a good reason to request the gag order.

Last August, in response to a student filing a lawsuit against NKU for mishandling a sexual assault case, the university issued a request for a gag order to be placed on all individuals involved in the case.

The passed resolution also recommended, “that the University, in the future, not seek to prohibit students from talking with the media about matters having to do with the University and its policies.”

The sexual assault case dates back to 2013 when Jane Doe, as identified in the case, said she was raped by a fellow student in her dorm room.

“The judge said ‘No.’ Not only did he say no, but he said ‘No. That’s ridiculous,’” said Ken Katkin, chair of the PCC. “He thought it was so ridiculous that he made the university pay for the other side’s legal fees for aspects for that.”

NKU also withdrew the request voluntarily when the court agreed to protect the confidentiality of the student records involved.

Amanda Nageleisen, the former spokesperson for the university, said that although the judge disagreed with the gag order, he did say that he would protect the information of the case during the legal process.

“The gag order was more about the parties in the lawsuit, just trying to make sure information that was confidential wasn’t getting out there in the media,” Nageleisen said.

Katkin said that many members of the campus community weren’t aware of the university’s actions in pursuing the gag order until they saw it in local news.

“This year when the student filed a lawsuit at the federal court and the university sought the gag order against the student — I read about it in the newspaper and other faculty members did too,” Katkin said.  “It wasn’t something the university was talking to faculty about, and maybe they didn’t need to — it’s not necessarily the faculty’s job to be involved in the university’s ligation —

“But when we read that they sought a gag order against a student, I thought it was wrong and other people on the PCC sent me emails saying, ‘What’s going on here?’”

Nageleisen cited FERPA, Family Educational Rights and Privacy Act, as one of the concerns for the university requesting the gag order. FERPA is federal legislation that seeks to protect the privacy of students’ personal information.

The governing documents the committee worked with to create the resolution were the NKU Values and Ethical Responsibilities Statement, the Code of Student Rights and Responsibilities, and NKU’s ‘Fuel the Flame’ Mission Statement.

Katkin said that both he and the committee found that the university contradicted ideas of freedom of speech both on and off campus as well as upholding transparency and accountability found in these documents through their actions.

Both the provost, Joan Gates, and President Geoffrey Mearns spoke to the committee in order to share the university’s perspective. After months of contemplation, the committee voted in November to budget the resolution for January’s Faculty Senate meeting.

Katkin said this was due to the committee not wanting to bury the resolution in the wake of exams and the holiday season, given the severity of the issue.

He said the opposition to the resolution stems from not wanting to be confrontational.

As a whole, the administration has been open and understanding of the faculty senate’s requests, according to both Katkin and Nageleisen.

“They’ve been pretty open with senate concerns,” Katkin said. “Some of the top executives seem to think ‘Oh, we don’t want to be churlish or create friction or tension. If we have this good relationship with them, where they do address our concerns, why would we want to do something sort of confrontational or antagonistic when it’s an outlying thing?’”

For students who saw the requested order and wondered why the university took those actions, Katkin said that the resolution — whether it passes or otherwise — may help students feel more informed on the issue.

“It is symbolic, but I would also say that it’s meaningful. I wouldn’t use the word symbolic in a disappearing way here,” Katkin said. “It’s so rare for the faculty to speak out on these kinds of issues. We are speaking about it in the context of it being an ethical issue. I think that when we speak it would be respected.”

The NKU Values and Ethical Responsibilities Statement, which was amended by the Board of Regents in May 2016, says that community members are expected to “promote academic freedom, including the freedom to discuss relevant matters in the classroom, with fellow NKU community members and with the public.”

The Code of Student Rights and Responsibilities states that students have the right to enjoy freedom of speech both on and off campus.

The requested gag order creates a direct tension to these ideals, according to the resolution created by the committee.

“Our ethical values say they should be able to do that, because how can we know if our policies are good unless we let people talk about them?” Katkin asked. “Seeking a gag order seems directly opposite of that. To say to a student ‘Well, we don’t want you out there talking to the public about how the university handled it when you were the victim of a sexual assault.’”

The ‘Fuel the Flame’ mission statement, which was instituted during Mearns’ administration, states that their vision includes holding the university accountable to the public and those who are invested in the campus community’s future.

The passed resolution questions if the suppression of public discussion regarding a sexual assault case holds the university accountable to both the public and those who invest in NKU’s future.

The mission statement also states that it values student-centered learning; the resolution questions if the efforts to silence ‘Jane Doe’ upholds this sentiment.