Board of Regents votes to sell WNKU 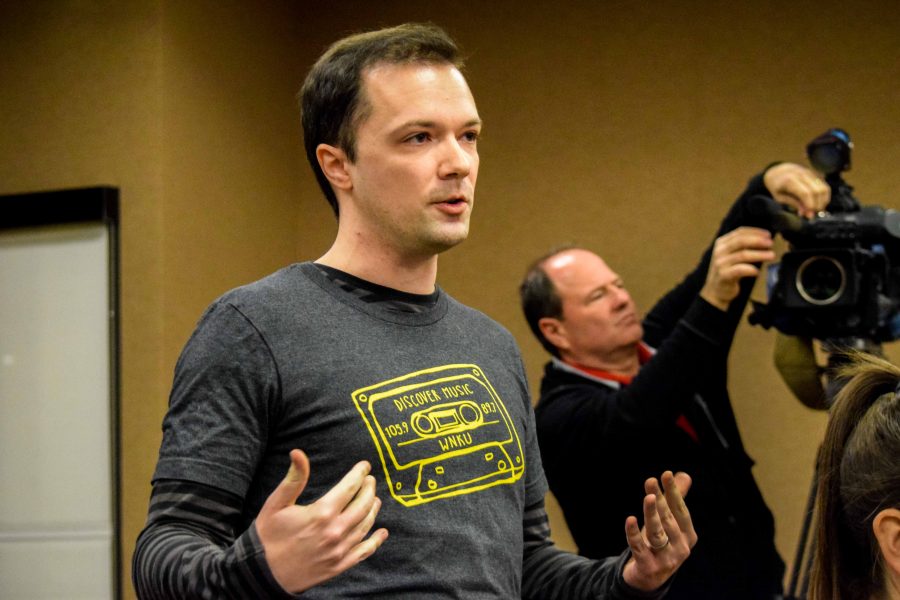 Steve Felix of WNKU speaks to the Board of Regents.

Faced with shrinking state funding and a potential seven-figure subsidy to WNKU, the NKU Board of Regents voted Tuesday to negotiate the sale of the radio station.

The station received an offer from Bible Broadcasting Corporation for $1.9 million. NKU will maintain the WNKU call letters.

In addition, the university will sell WNKE in New Boston and Portsmouth, Ohio, for $700,000 to Educational Media Foundation, which syndicates Christian programming through Air1 and K-LOVE.

University spokesperson Amanda Nageleisen said that the vote authorizes President Geoffrey Mearns to execute those agreements, which should happen in the coming days.

The agreement is subject to FCC approval, according to Nageleisen. She said that process could take months.

“WNKU will stay on the air until that process is completed,” Nageleisen said.

Nageleisen said approximately 20 full and part-time employees will be impacted.

The Board of Regents met in executive session for two hours. Before the board voted, members of the audience, which included both employees and friends of WNKU, had the opportunity to address the board.

This included Aaron Sharpe, the acting general manager of WNKU. Sharpe, a 2000 graduate of NKU, was disappointed that he didn’t have an opportunity during the process to work with the board.

The likely change in format and the potential loss of a locally-owned public radio outlet also concerned Sharpe.

“Not to keep the station here, but to protect WNKU as a local public media outlet,” Sharpe said. “Especially in this climate right now, where the arts are under fire the CPB (Corporation for Public Broadcasting) is looking at cuts in funding. Public media is more important than it has ever been before.

“When public radio stations get sold to religious broadcasters, you’re getting into dangerous territory. Again, I’m not suggesting that you don’t sell it. I’m suggesting that we work together to find a way to find the right buyer.”

Rich Boehne, chair of the Board of Regents, said the process was broad and open. Nageleisen said that former WNKU General Manager Sean O’Mealy had “extensive conversations” with the board regarding the station’s business model and its future.

Boehne said the university could no longer subsidize the station at the expense of its students.

“We believe these are the best offers and opportunities we’ve received,” Boehne said. “Our goal being we cannot finance on the backs of our students and our core mission.”

In addition, Nageleisen said the sale of the properties will allow NKU to invest that $1.1 million back into programs that directly benefit students. The revenue from the sale of WNKU, WNKE/WPAY, and the anticipated sale of WNKN in Middletown will pay off the $5.1 million debt NKU is carrying from the 2011 radio station expansion.

Boehne said that while many of the concerns addressed by WNKU supports were valid, the university had its own set of issues to consider.

“Everything you all say is true, but it’s also true that we believe we’ve run a very good process,” Boehne said. “These are the best opportunities for our students and for the core mission of the university.”

After the board approved the sale, Boehne made a statement where he confirmed

“It’s painful to let go of something that has reflected so well on our deep commitment to this region,” Boehne said. “However, the media world is shifting dramatically and these terrestrial voices no longer provide access to our most important constituents.

“To the staff, thank you very much. You’ve done a sensational job. The marketplace has, unfortunately, turned against us here.”

After spending the last 18 years with WNKU, Sharpe couldn’t hide his disappointment at the decision to sell the station.

The 2000 graduate of Northern Kentucky came to the Highland Heights campus specifically because of WNKU.

“I transferred from the University of Cincinnati to NKU because of this radio station,” Sharpe said. “I had wanted to go into radio before, but even 20 years ago, I didn’t feel like there was a home for me in the corporate radio landscape. I transferred to NKU to get close to WNKU for that very reason.”

For Sharpe, it was a day he and his staff knew was coming. That did not make it any less painful.

The sale of locally-owned campus radio stations is something that has become more common, according to Sharpe.

“Unfortunately it has become the norm with universities,” Sharpe said. “This was the last university-owned public radio station in our market. Fortunately, the other stations, WMUB and WVXU, were preserved as public radio entities and have done very well.

“I was hoping we would be given the same opportunity. And that didn’t happen, and it’s a shame.”

Despite the disappointment, he understands why the decision was made.

“I have no doubt that the Board of Regents and President Mearns and Rich Boehne have the best interest of the students in mind,” Sharpe said. “I know that comes first for them. I think students need to know that. That’s important.”

NKU President Geoffrey Mearns announced April 5, 2016, that the university should explore the possibility of selling WNKU-FM and its assets. To begin that process, Mearns issued a Request for Proposal (RFP) for a broker to explore a potential sale.

Mearns commented on the decision in a campus-wide email.

“As we continue to wrestle with financial challenges, I concluded that we could no longer justify using our resources — our students’ tuition and our state appropriation — to subsidize WNKU’s operations,” Mearns said in the email. “This decision was made only have lengthy evaluation and study, and it was not made lightly.”

Since April 29, 1985, WNKU has operated as a non-commercial radio station at the frequency 89.7 on the FM dial.