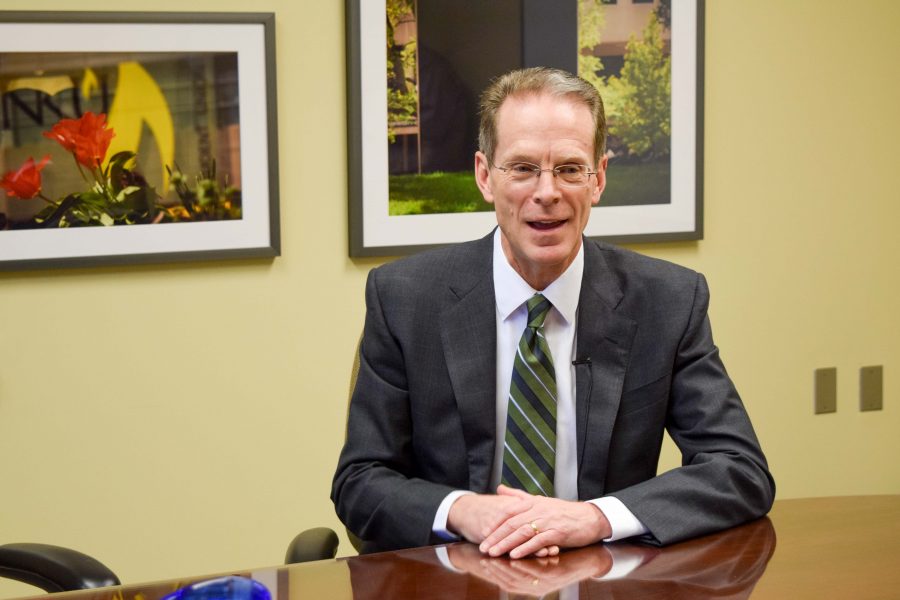 NKU President Geoffrey Mearns discussed some of the things during his tenure that he was most proud of during an interview with The Northerner earlier this week.

Reflecting back on his time, President Geoffrey Mearns said that his proudest moments over the five years he has served NKU were in the relationships he forged within the campus community, particularly with the students.

Mearns discussed his time at NKU during an exclusive interview with The Northerner. Ball State selected Mearns to be its 17th president. He will begin at Ball State no later than Aug. 1.

Mearns hopes that his successor heeds to this same call, placing importance on interacting with the students and faculty.

“I will remain indebted to the university community, grateful and very proud that I got to be a part of this community,” Mearns said. “I would reinforce that to the successor, whoever he or she might be, to understand and appreciate every day that he or she is in that position.”

The decision to not renew his contract with NKU, which was announced on January 24, and move to Ball State University in Muncie, Indiana was not one he made with ease.

Though Mearns regrets if his choice saddened the campus community, he said that it was part of the burden he carried while weighing the decision. He said that he hopes students can reflect on the good times they’ve had together.

“I feel not only a contractual obligation here, I feel a moral and professional commitment to NKU,” Mearns said. “So I will stay as long as I can be helpful and as long as I can make a contribution here.”

Related: Chair of Board of Regents Reflects on NKU’s Future

He was first contacted about the job offer at Ball State in the late fall of 2016; his first interview for the position was two weeks ago.

The process for hiring on university campuses is slow, as the university puts together a search committee to determine what they’re looking for.

“So from the perspective of Ball State, the process took some time,” Mearns said. “But for those of us who are candidates, it tends to go very quickly once it picks up pace.”

Though he doesn’t know if he agrees with the chair of Board of Regents Rich Boehne’s assessment that being a university president is the hardest job in America, Mearns said there are several challenges attached to the position.

The challenges of the job lie in the myriad of voices that a university president represents, Mearns said. Students, faculty, staff, alumni, donors, elected officials, the surrounding community and potential employers all have different views and expectations. Acknowledging and working with these different views is the challenge, according to Mearns.

“The flip side of any challenge is if you do it well, it’s really rewarding,” Mearns said.  “If you’re able to bring those diverse constituencies and diverse perspectives together and give them a sense of the value of a commitment to a common purpose.”

Mearns reflected on the initiative to build the Health Innovation Center, the move to Division I athletics, renovations to the Campus Recreation Center and the openings of both Northern Terrace and the new dining halls as points in his presidency.

He hopes that these accomplishments are ones that continue after his leave.

Throughout his time, Mearns said he wanted to work towards making NKU a diverse and inclusive place.

When an unauthorized flyer was posted in the Student Union with the words, “Welcome White Week,” in response to “Welcome Black Week,” resulting in a demonstration from the student body, Mearns said that the actions of the student body turned a bad day into one to be proud of.

“We care about other members of the community irrespective of their race, background, gender, orientation, social status; that’s the ideal that we’re striving for. We’re not there. We’re not there here [at NKU], we’re not there in our society. But we’re making some progress.”

Although Mearns’ contract will be up by July 31st,  he said that he’ll still be around. His daughter, Clare Mearns, is currently a student at NKU and he said he will continue to be a Norse fan for life.