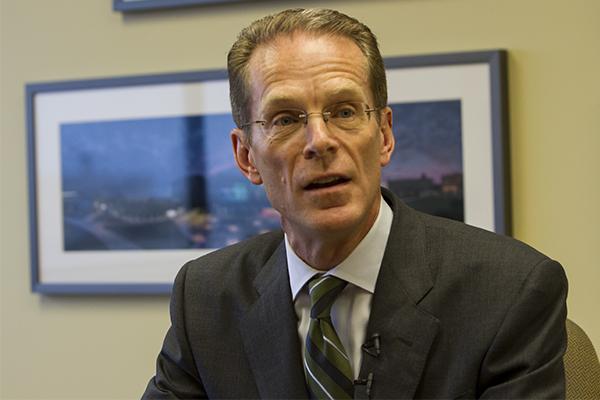 The Muncie, Indiana university made the announcement during a 1:30 p.m. assembly at Sursa Hall.

According to a press release from Northern Kentucky University, Mearns notified the Board of Regents that he will not renew his contract, which expires July 31.

In a letter sent via email to students and faculty, NKU Board of Regents Chairman Rich Boehne said a search would begin immediately to look for Mearns’ successor.

“We anticipate having more information to share over the coming weeks, including the timing of Geoff’s departure, the naming of an interim president, and the creation of a presidential search committee,” Boehne said in the email.

News of Mearns’ departure began spreading across the Highland Heights campus as he spoke at Ball State University. Ball State’s Board of Trustees announced its decision in a release Tuesday on bsu.edu.

“Geoff Mearns is exactly the leader Ball State needs to move us boldly into the next 100 years,” said Ball State Board of Trustees chair Rick Hall in a release. “His prior experience and knowledge of higher education will enable him to partner with our faculty, staff, and administration to provide Ball State student with a life-changing education.”

Mearns spoke to the crowd after his hiring was announced.

“Mr. Hall, I want to thank you and all the other members of the Board of Trustees for giving me the privilege of serving this outstanding university,” Mearns said.

After the announcement, Mearns sent an email to NKU students discussing his decision.

“This decision was a difficult one for me and Jennifer. When we moved here five years ago, you welcomed us into your community, your families and your lives with open arms. We are grateful to have worked alongside you and made a difference at NKU and in the community.”

Mearns leaves Northern Kentucky University after spending four years as the university’s president. He started as president Aug. 1, 2012, after being hired April 17. He replaced James Votruba, who announced his retirement in August 2011.

After taking over as NKU president, Mearns help craft a five-year strategic plan known as “Fuel the Flame.” This plan was intended to take NKU up through its 50th anniversary in 2018.

He also helped secure $97 million from the Kentucky General Assembly, which helped aid in the construction of the new Health Innovation Center, which is scheduled to open in 2018.

One of Mearns’ most vocal causes was fighting for increased funding for NKU from the Kentucky General Assembly, citing a funding disparity for the university. He has helped work on a performance-based funding model to help divide the money spent on higher education in the state of Kentucky.

According to the press release, Mearns has co-chaired the myNKY visioning initiative and the 40th annual Heart Mini-Marathon. He also chaired the Northern Kentucky CEO Roundtable and served on the boards of organizations including the United Way of Greater Cincinnati, the Health Collaborative, and Cintrifuse.

This is a breaking news story.