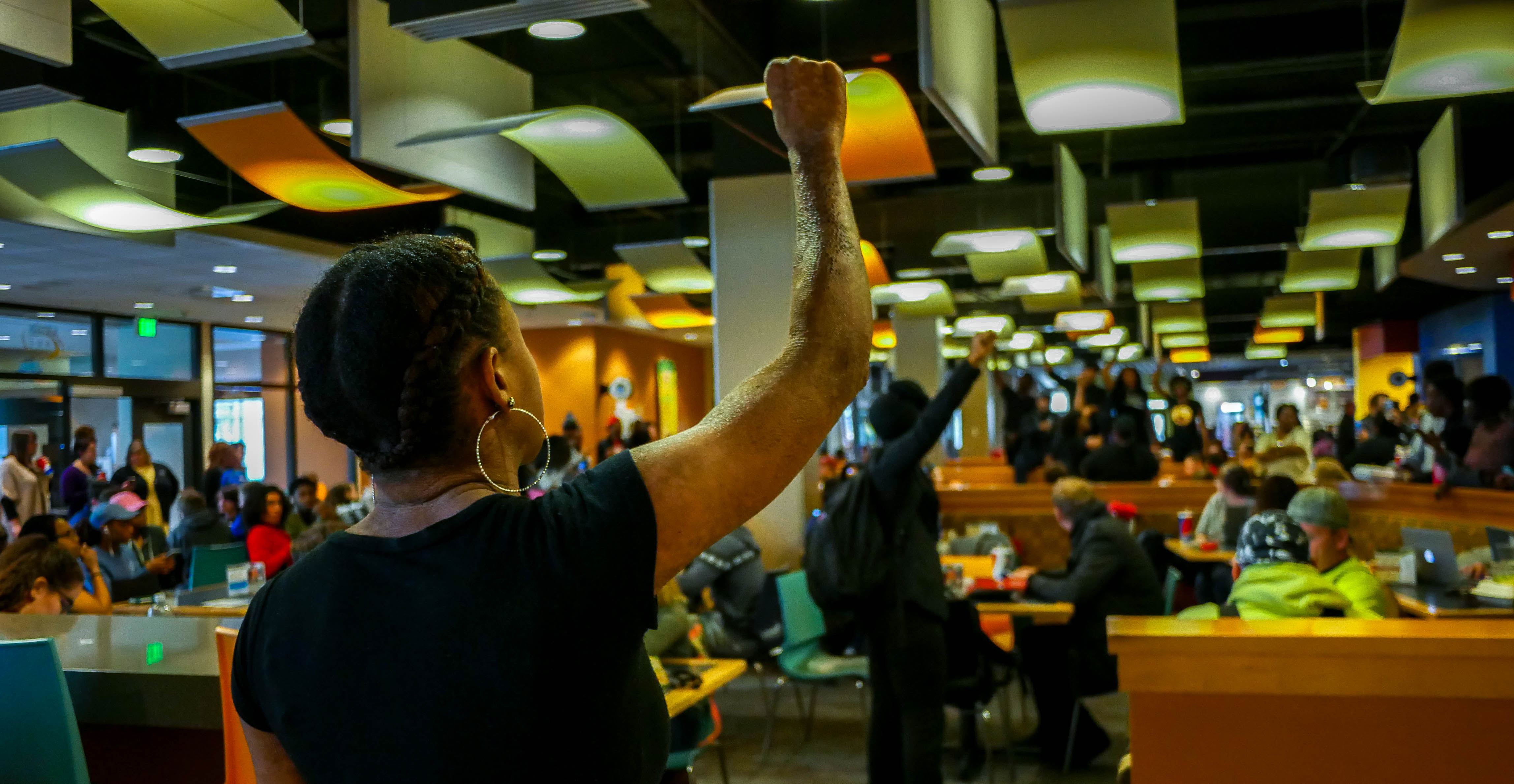 Tekiuh Hutton raises her fist in solidarity with The Unaddressed. Several students performed a spoken word demonstration in the SU. (Alec Reynolds)

Tekiuh Hutton raises her fist in solidarity with The Unaddressed. Several students performed a spoken word demonstration in the SU.

‘The Unaddressed have something to say’: Spoken word demonstration takes place in SU

Jayren Andrews stood up on the table in the Student Union cafe, the room swollen with conversations.

Hands cupped around his mouth, his voice resounded through the SU.

The volume of conversations dwindled, faces gravitating towards Andrews, a freshman communications major.

“The Unaddressed have something to say.”

The Unaddressed initially emerged in the wake of the ‘Welcome White Week’ flyer, posted without university permission in response to ‘Welcome Black Week’.

Since the formation, and after meeting with both the university president and Student Government Association, the group has started to turn more into an unity movement, said Trayonna Barnes, a freshman psychology major.

Sprawled out across the SU dining area, students recited spoken word poetry. Voices wielding determination and power, they spoke their grievances to the crowd, layered in social commentary.

The topics hit subjects such as police brutality and racial profiling, the lack of a black studies major, black beauty and culture  and a lack of representation.

Briana Lee stood on a chair, touching on topics from systematic racism and experiences as a black minority student, addressing the crowd around her.

Lee, a freshman anthropology major said that although majority students will not understand the lived experiences of a minority student, the demonstration allowed The Unaddressed to be heard.

It gets a conversation started, she said.

“It gets everything up in the air,” Lee said. “It forces people to listen to us, and if they would like to understand a lot of it is research. We’re not just complaining for the heck of it, it’s stuff that we actually go through.”

Converging from spots throughout the SU, each performer came together in the end, voices joined in unity, fists raised in the air. They spoke of a broken system and a broken America.

As time went on, those who demonstrated grew together as the performance went on, gaining strength and voice, according to Andrews.

“The intentions is to make the movement very substantial and generational for kids to come. Overall in this society minorities are seen as a threat,” Andrews said. “Talking about the problems and understanding that there has to be a solution to come, we hope to gain a lot of conversation. A lot of trial and error in order to stop this problem.”

With the demonstration, The Unaddressed bared their voices, demanding to be heard.

On Nov. 21, a student talk will be held on the third floor of the SU in the inclusive center for minority and majority students alike. Barnes hopes that people will come out, for open and honest discussion.

Barnes thought the overall reaction of the demonstration was positive.

“I believe that this went over very well, I’m happy with the response of the majority. I think everyone was mature about it,” Barnes said. “The response was beautiful. That’s what I was most concerned about, not as much as what they were saying, because it’s their opinion and they have the right to that.”

On November 9, after the election, a student talk was held on the third floor of the Student Union.

Andrews said that he hopes the demonstration will draw people out and that everyone will show their true colors, so students can get on the same page.

Spoken word, as far as Andrews is concerned, is the best way to express yourself.

“Poetry and spoken word is meant to express how the artist feels. At a time like this, for our university, I feel that there are a lot of things that should be spoken on that aren’t really expressed and a lot of people don’t know how to go about it,” Andrews said.  “Through this demonstration I feel as if we should close some gaps to questions that any students may have.”