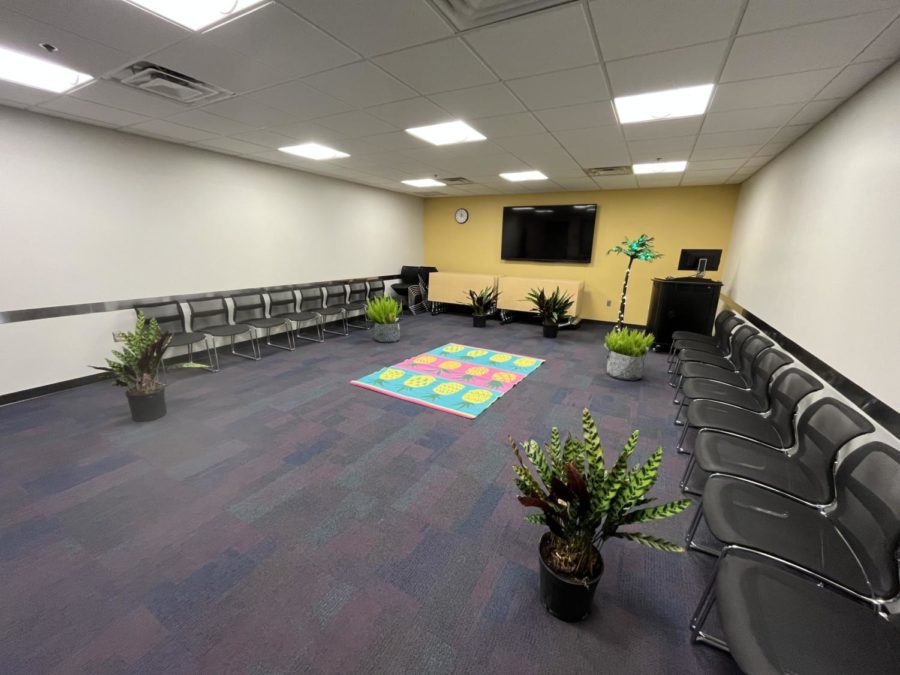 Prayer and meditation room located in UC 335 during Interfaith Week.

NKU held its first ever Interfaith Week this past week, an opportunity for faith-based student organizations and students of any religious identity to connect with one another and reflect on the power of faith in the NKU community through a slate of events and arrangements.

The week commenced with a kick off event and student panel on Monday. The events progressed with student organizations tabling in the Student Union Monday through Wednesday, a coat and food drive Tuesday and Wednesday and a Friendsgiving Dinner on Thursday.

Supplementing these events was the establishment of a prayer and meditation room in University Center 335 where all students were welcome to unwind, pray or find grounding through reflection.

Coordinator of Student Engagement Jordan White explained that the room was decorated to exude a neutral feel, absent of symbols and messages that could sway it toward a certain ideology. Plants were donated by the Grounds and Horticulture department to spruce up the room and create a natural, tranquil atmosphere, White said.

Interfaith Week was born out of a task that Dr. Eddie Howard, Vice President of Student Affairs, assigned to the Center for Student Engagement and Center for Student Inclusiveness to design a program alongside NKU’s faith-based student organizations that promotes interaction and connection among people of different faiths.

The Inter Faith Network is an organization that began as a proposal in England to unify a religiously diverse society. The inaugural Interfaith Week was held in 2009 and has since evolved into a noteworthy organization that programs nationwide ways for citizens to participate.

The original English Interfaith Week model and philosophy was a helpful source of inspiration while planning the week at NKU, according to White.

Recognizing faith as a key aspect of many student’s lives and identity, Interfaith Week intended to affirm beliefs and provide spaces for positive experiences to strengthen the network of diverse religious standings within the student body. Regardless of one’s background and relationship with faith, everyone was welcomed to participate in the events and utilize the prayer and meditation room.

Sophomore Mohammed Ali, president of the Muslim Student Association, rebanded the organization this year after it dissolved a few years ago. He said after coming to NKU last year and connecting with people from the same faith background, he was disappointed to see their hesitance to identify as Muslim, citing the 9/11 terrorist attack’s detrimental influence on societal perceptions of Islam and its adherents.

This sparked Ali to strive toward a campus that views and treats Muslims equitably and instills pride in Muslims at NKU.

The organization has been active since its reestablishment, hosting events and contemplating actions that foster Muslim inclusiveness.

The MSA is currently developing a proposal for Dr. Eddie Howard and university president Dr. Ashish Vaidya to advocate for NKU to offer halal food. “Halal” is an Arabic word that translates to “permissible.” Halal food is prepared in a way that adheres to Muslim beliefs and particularly pertains to procedures for slaughtering livestock.

“Islam is not just a religion … but it’s a way of life,” Ali said. “So if my way of life gets compromised by the standards in which we live, then that is a problem.”

The MSA and event organizers coordinated that food be catered by a local halal restaurant to accommodate people of Islamic faith at the Friendsgiving Dinner on Thursday, according to Ali.

Despite feeling underrepresented on campus at times, Ali said that Interfaith Week has helped him find common ground between him and his peers of differing faiths while providing a chance for the MSA to exclaim Muslim presence on campus and push for inclusiveness.

“I was more focused about how I want to speak about Islam. But then the questions … I had to put into perspective in a way that makes sense to other people, because Islam promotes respect,” Ali said of his experience at the student panel on Monday. “I got to be able to actually teach myself to respect others by hearing what they believe and find out that we have something in common.”

Interfaith Week enshrined the common thread of influence faith holds among students and how the campus can serve as a spiritually supportive environment.

“We all see God a little bit differently, but if you’re willing to put in the time to actually show up to events … we can all help each and every student along in their faith journey,” said Vine and Branches director John Girdwood.