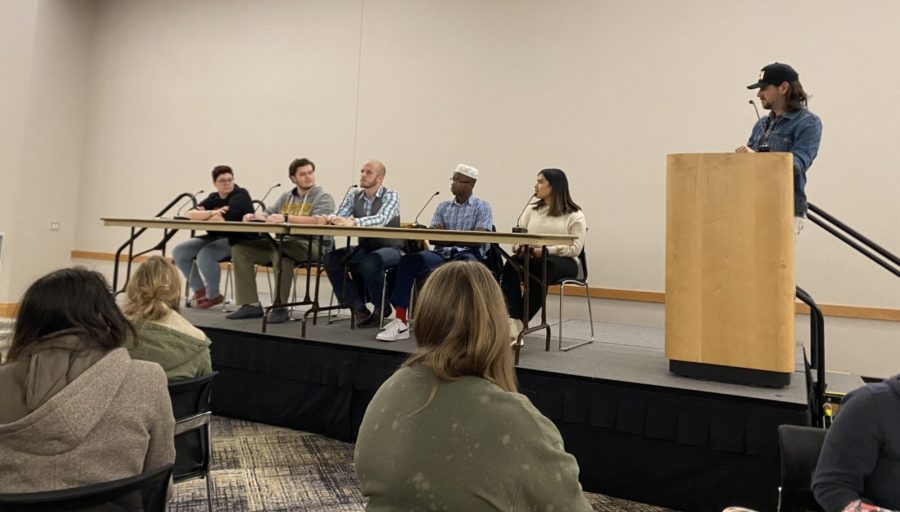 NKU’s first-ever interfaith student panel, hosted by the Center for Student Inclusiveness and Center for Student Engagement, took place Monday evening. Five panelists represented faith-based organizations to answer questions related to how religion is integrated into their daily lives and the importance of conversing with students from other denominations.

“We all have our own views, but they’re also similar to an extent,” said junior Ryan Carraro, who attended the event and is a member of the Catholic Newman Center.

The panel discussion took place in the Student Union ballroom. Panelists were questioned for about 45 minutes with a total of five questions that were brought up by Matt Wallin, assistant director of the Baptist Campus Ministry, who led the discussion. Each panelist was told they had to answer at least three out of the five questions prior to the event.

Starting off the evening, panelists were asked how they were able to find their faith. Prerena Poudel, who is Hindu and a sophomore majoring in computer science, jumped on the question, stating that her religion came to her when she needed guidance in middle school during her studies.

“I was a straight-A student and when I was anxious I would just pray,” Poudel said.

Wallin went on to the next discussion point and asked the panelist to tell of a time when their faith was helpful to them when going through a hard time, referencing that college and life can pose tough experiences.

“I think faith makes you feel grounded and it makes you feel like somebody else is looking over you and you are being taken care of,” Poudel said, being the first to explain how her faith can help her feel more relaxed.

Chris Wallace, a first-year medical student, told his story in relation to him being a Christian and how Christ gives him the strength to study 12 to 14 hours a day. In addition, God gives him a sense of worship to complete strenuous tasks as a medical student.

Michaela Vogel, also a Christian and senior chemistry major, stated that during her freshman year classes were taking a toll on her mental health and that through her faith she has come to realize that she is truly never alone during times of hardships.

The conversation steered towards what practicing your faith looks like in each student’s religion, which was followed by Mohammed Ali’s response. Ali is a sophomore majoring in mechanical engineering and is Muslim.

“Nowadays you need to really sit and ask yourself, ‘Am I doing what is right or am I doing what my friends want me to do,’” Ali said, explaining that his religion is about being a good human and trying to change the behaviors of others to do good.

Following Ali’s response, Wallace replied that his faith has to do with a lot of conversing with God and asking Him how he can be of service to others.

The discussion ended with the question given by Wallin asking the panelist how their faith affects their relationship with others and how their life is different today as a result. Poudel, Ali and Nick Osburg, a junior majoring in cybersecurity and information technology with a Catholic denomination, all answered this question.

For Osburg, his faith has allowed him to find a community on campus and find friends through the Catholic Newman Center that help him to be closer to God. Additionally, Osburg stated that because of his religion, he has more true and fuller relationships with his family.

Ali responded how his relationship with God and his friends can be contradicting, explaining that Muslims cannot consume alcohol and how that affects his relationships with others.

“If I’m going to call myself a Muslim I should go by those standards, those values,” Ali said.