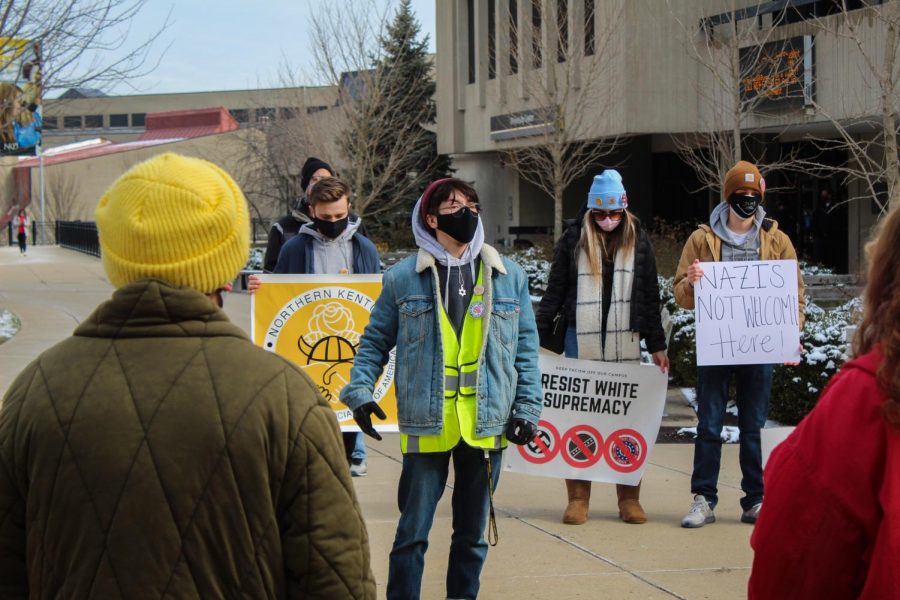 “NKU’s response has been the same thing every single time an event like this happens, they give us lip service,” Russ Gifford, president of the organization said.

He continued to say no one on the campus is safe if Nazis are allowed on campus and emphasizing that NKU should not be a safe space for Nazis and saying he felt unsafe as a Jewish individual.

“I should not have to leave my dorm, as a Jewish person, and want to put my star of David [necklace] in my shirt because I don’t feel safe where I live. I left the school that I used to go to because I didn’t feel safe where I live. That should not be the same thing here,” Galyon said. “We have the power to change this if we say something and that’s what we’re doing here today.”

The organization had a list of demands of NKU when it comes to hate rhetoric. Their demands included a definition for hate speech, proper education on white supremacy, a board of minority students to dictate how NKU will respond in the future and transparency and cooperation during the investigation of Wednesday’s events.

The floor was then open to comments from the crowd and SGA Senator Karla Arango, sophomore international studies major, began saying that this was a target against all marginalized groups.

“If you’re anything besides a cis-gendered, straight, white man, you were a target of what they did. I need all of us to recognize that because … they’re targeting all of us,” Arango said.

Arango also noted that in the planning of the protest she and the rest of DSA did not include all communities in the planning listing National Pan-Hellenic Council, Disabilities Programs and Services and others.

“That is on us and we will do it better next time,” Arango said. “But I need you guys to continue to please be loud and not give up on this movement that we are trying to start. Because it starts with all of us.”

The crowd then began critiquing the lack of diversity in the organization, the planners and those in attendance. Hall Director Amira Bryant said she wants to remind everyone when you create separate spaces, you are allowed to exclude certain groups. But, when in public spaces like the protest was held, she wants to see everyone accepted. She advocated for the students to continue with their momentum and tell their friends.

“I just want you to know while you’re young and while you’re students because there are individuals above us where capitalism is real, and they’re thinking about food on the table instead of freedom,” Bryant said.

Halleigh Brown, sophomore social studies education major, came with a sign that read “Hate speech ≠ free speech” because she thinks no hate speech should be protected by law. Brown said she came to the protest to speak out about injustice and uplift Black voices, which she felt did not happen today.

“If you’re gonna make things like this and if you are going to have protests and things, you need to make sure that you uplift the voices of people that are involved, not just a few people, everyone,” Brown said. “And NKU needs to make a change on this campus because we are harming students more than ever right now.”

As the event came to a close Gifford said he thought the dialogue that came from the protest was wonderful. He said the dialogue talked about the shortcomings of leftist organizations like DSA.

“We want to give you the platform to speak because it’s unfortunate when we fail to do that, and we stand on our soapbox. That’s not our goal, and all too often it appears to be,” Gifford said.