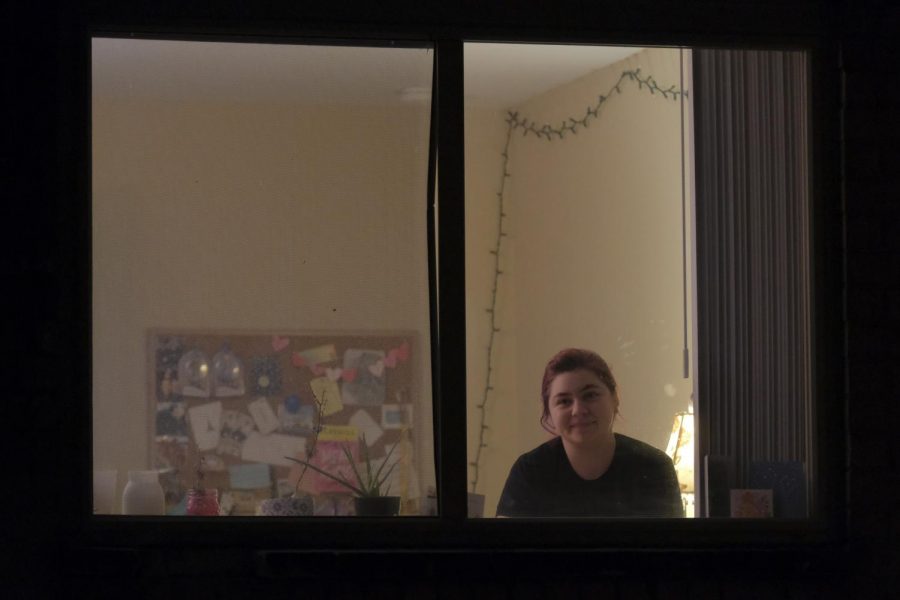 Kaeppner’s health has improved and now she takes care of herself and Sleczkowski.

Her mom had coronavirus over the summer, so Kaeppner was spending a lot of her time bringing her mom groceries and helping out with other tasks. Her mom had been sick with COVID-19 for months, so Kaeppner knew first-hand how bad the symptoms could get.

When she started experiencing symptoms, she was scared at first. She knew how bad coronavirus could be for some people and wasn’t sure what her symptoms would be like.

“I’ve seen that there’s just a giant range of symptoms,” Kaeppner said. “Some people are only super mild, but some people have to go to the ER and intensive care and get a respirator. I didn’t really know where I was going to be on that spectrum and luckily didn’t get as bad as Isabel or my mom, which is good.”

After she and Sleczkowski scheduled and took their COVID-19 tests, they got their results back a few days later. Both Kaeppner and Sleczkowski tested negative. Kaeppner said she wanted to test positive for COVID-19 because it would have reaffirmed what her doctors had been telling her.

About a week after testing negative, Kaeppner’s symptoms intensified and she decided to go to the ER. It wasn’t the worst night for her, she said, but she was having trouble breathing and wanted to make sure her symptoms didn’t turn into anything worse—like pneumonia.

Kaeppner said the night was hazy, but she remembers being driven to the hospital, getting dropped off and filling out paperwork in the waiting room. Eventually, she went back to a room and they performed tests on her to rule out any other illnesses.

“I wasn’t scared at any point,” Kaeppner said. “I was just anxious that I was overreacting the whole time.”

A few hours passed and she was discharged and sent home. The ER told her she had symptoms of COVID-19 and to stay home, rest, take vitamins and drink fluids. Her symptoms persisted for a few days, but she never went back to the ER because there wasn’t much they could do for her.

When she and Sleczkowski were both sick, they would take turns getting out of bed for different tasks.

“She’s like ‘Emmy, I can’t get out of bed, but I really need a Gatorade or a Pedialyte’ and I’m like, ‘OK, I can do this, I can go get it,’” Kaeppner said. “Like an hour later, it’d be different. I’d be like, ‘I’m so hungry, but I can’t get up and make anything’ and so she’d go and she’d get a box of crackers from the kitchen and get back.”

Most days were like a roller coaster, Kaeppner said. She would wake up in a lot of pain, but by the middle of the day, after the medicine kicked in, she would feel better. However, once her body started to feel exhausted and it was time to go to bed, the pain intensified.

When both of them were sick, they’d spend their time in bed watching movies and TV shows. They rewatched a few episodes of “Bones,” which is the first show they watched together when they started dating.

“Her excuse, sometimes, to get me over to her dorm was like, ‘oh my God, we should binge watch “Bones” together. It’d be cute.’ We’d lay in her dorm bed and rewatch “Bones” but actually talk for most of it,” Kaeppner said.

One day, Kaeppner said she woke up and wasn’t in as much pain anymore. Her symptoms had lessened and she started to feel better. It was easier for her to get up and accomplish tasks without feeling overly exhausted. She made muffins the first day she felt better.

“Obviously, she wasn’t getting better as fast as I was. I was like, ‘it might just take you a little more time’ and now it’s been like six weeks, and she’s still not better, which really sucks.”

Kaeppner said sometimes she has survivor’s guilt feelings because her health improved but Sleczkowski is still sick. However, now that she feels better, she’s thankful she can take care of herself and Sleczkowski—such as cooking meals, taking out the trash and getting the mail.

A typical day for her now involves getting up, feeding the cat, making breakfast and starting class. She checks on Sleczkowski every morning and makes sure she takes her medicine. After that, she heads to the living room where she works on homework and making face masks.

Kaeppner’s outlook on the pandemic hasn’t changed that much; she still thinks everyone should stay home and quarantine. In fact, she thinks personally having COVID-19 and knowing people who have COVID-19 has made her stricter on quarantining.

“It’s really not worth it to get COVID because you never know how bad it’s gonna be until you actually get it,” Kaeppner said.

She said having COVID-19 has offered her a unique perspective when arguing with people online who don’t share her same viewpoints.

“It’s given me a lot more strength in my punch when I’m like well, ‘I have COVID so when you say that it’s fake, it really hurts because you’re saying that I’m lying and that my fiancee is lying and that my mom is lying,’” Kaeppner said.

Despite getting COVID-19 and being in pain frequently, Kaeppner said the experience allowed her and Sleczkowski to spend more time together. This summer, they both were going to be separated but their summer plans were canceled when COVID-19 cases started increasing.

“If I didn’t think she was strong before, she definitely is the strongest person I know now … She’s still taking five classes. She’s still an LGBTQ ambassador, and she’s still running Lavender Society,” Kaeppner said. “I don’t think I could do what she does, which is wake up every day and still hurt and just keep on truckin’ and everything.”