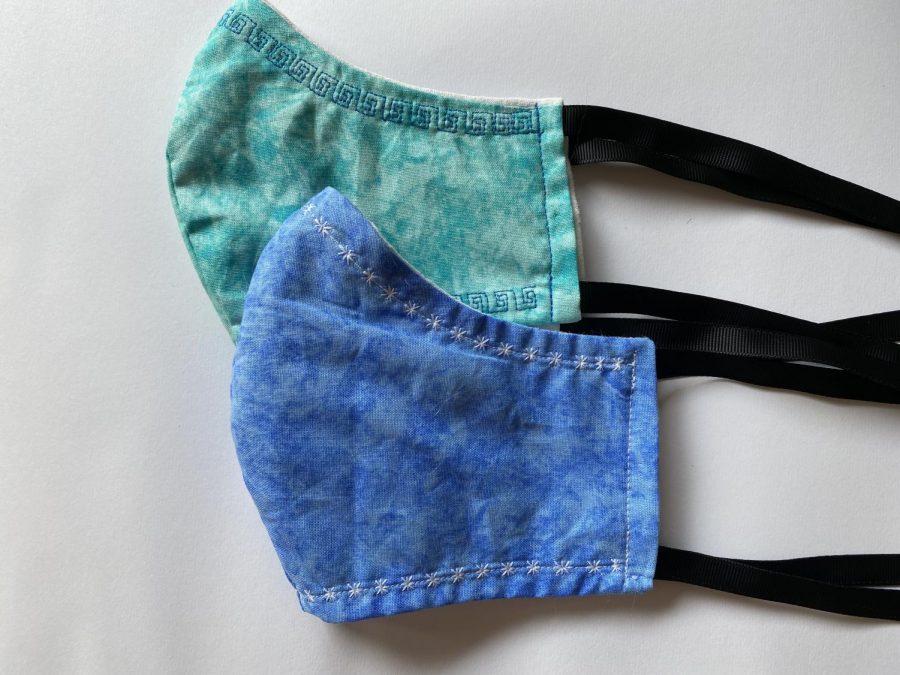 Norse up, mask up: Costume design majors sell their own custom masks

When the country shut down back in March, Shelby Doyle kept sewing. With some old fabric from downstairs, she began making some masks for her family.

After those masks were made, there was still some leftover fabric, so she posted on Facebook and asked if any of her friends needed any custom masks made.

“I know how to sew and I have the materials so I might as well make some stuff for [my family],” Doyle said. “But then I wanted to make sure everybody at least has the ability to get a mask—and fun patterns.”

After watching YouTube tutorials and learning how to properly make a mask, the senior theatre design/technology major began clipping and ripping different fun patterns onto the custom masks. According to Doyle, 100 percent cotton fabric is the best fabric to use for a mask. Because of this, she uses two layers of 100 percent cotton fabric with one made of muslin and the other being the custom layer on the exterior.

To test the effectiveness, Doyle holds a flame in front of her while wearing the mask and attempts to blow out the flame. If the flame doesn’t move much, according to Doyle, it is an effective mask.

The patterns that Doyle chooses for fabrics are typically things she likes. Some of her favorite patterns include vintage tattoo items, cowboy items, “witchy things” and an ironic Walking Dead pattern.

The process takes Doyle roughly five to 10 minutes per mask, but she doesn’t know how the fall semester will change her availability.

When Doyle originally started at NKU in fall of 2018, she met Emmy Kaeppner, now a senior theatre design/technology major, during a costume design class. There, the two began what would eventually become a close friendship, seeing each other in the costume shop and several other classes thereafter.

Kaeppner also began using her costume design talents to sell masks recently, as well. She started making masks for friends, family and people who requested them. When her aunt donated six yards of fabric for her personal order, she realized how she could make more masks for others.

“Now I’m making like 100 masks to sell because that’s how much fabric she freaking sent me,” Kaeppner said through a laugh.

Kaeppner does a similar creation process as Doyle. Her masks also include 100 percent cotton fabric with the interior being made from a t-shirt so they are soft. One of her favorite masks is a bee pattern she made for her younger cousins.

Kaeppner said she finds it relaxing to sit and sew the fabric together and often does it when she’s bored. Her process typically takes 15 to 20 minutes to make one mask. During this time, Kaeppner has received support from her professors and costume design community.

Kaeppner said her fiancée caught it by surprise at work when she took her mask off momentarily, and her coworker was unknowingly carrying the virus, which eventually led to Kaeppner also being infected.

“But she’s still dealing with symptoms. I mean she can barely even get out of bed. But luckily, for me, it only hit for like two weeks.”

Because of this, she advises people to wear masks at every opportunity possible because “you never know when you can get it.”

Doyle said interested customers can reach her on any of her social media to purchase a mask. You can message her on Twitter or Instagram to purchase one. She accepts both PayPal and Venmo.

Kaeppner said interested buyers can message her on Facebook to purchase any masks. Prices are $5 for pickups and $7 for mail delivery. She mainly accepts Venmo but will accept PayPal if need be.

The two of them wear masks as a way to protect themselves, but also a way to express their personality. Nonetheless, they both push for others to wear masks as well.

“Wear a mask. Do your part. Don’t get anybody sick. Wash your hands. Be nice. Just be good to each other,” Doyle said.