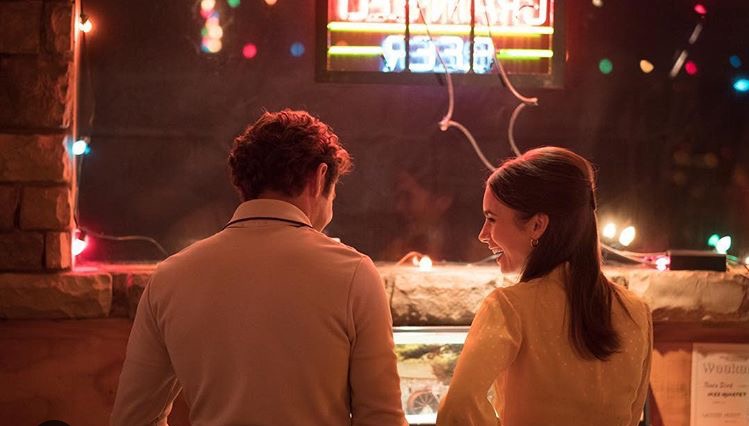 When Ted met Liz, as pictured on Zac Efron’s Instagram.

Norse Nation got a dose of Hollywood magic as film rolled on campus on a snowy Saturday afternoon for Zac Efron and Lily Colin’s latest flick, Extremely Wicked, Shockingly Evil and Vile.

The film chronicles the crimes of serial killer Ted Bundy from the perspective of his longtime girlfriend, Elizabeth Kloepfer (whose relationship lasted through his murder trial in 1979). No spoilers: she didn’t believe he was guilty of the heinous murders of over 30 women for years, and met  him nearly two years before he took his first victim in 1974.

Didn’t catch Efron on campus? Don’t fret. He’s been spotted across Greater Cincinnati, including Mainstrasse Village in Covington last Tuesday, which was transformed into circa-70s Colorado (complete with old cruisers). The day after, he jumped out of the Campbell County courthouse (with proper safety precautions, of course); other spots include Newport, Fort Thomas and Midwest Gas on Alexandria Pike.

Bridgette Gootee, senior visual communication design major, caught a fleeting glimpse–but by accident. When she left the arts building after finishing up some paintings, it didn’t yet register that she was creeping up on the film set.

“Some guy stopped me and said ‘can you not turn off your car for a couple of minutes? We’re about to start filming,” she said, adding that she made small-talk with the tech guy, and, since she was polite, he let her watch a short scene.

“[Zac Efron] just walks five feet in front of me and gives a short wave to me and the guy,” Gootee said, during the interaction she made what she described as a dumb face. Then, she watched on as Efron, wearing a plaid-mustard jacket, struck a women with a pipe.

“As soon as I got in my car, I called my mom screaming,” she said.  The verdict? He seemed like someone who you’d pass on the street, with the added allure that he’s known worldwide and makes more money than your average joe.

“I’m the last person I thought this would happen to,” Gootee said. “Because I just don’t care that much. But, when it did happen I was like ‘Hell yeah.'”

When she woke up the next morning, life seemed less exciting. But, she hopes that catching a glimpse of the celebrity won’t be the peak of a lifetime worth of experiences.

NKY and Greater Cincinnati have hosted several filming sites in past months, including last November’s Killing of a Sacred Deer, Robert Redford’s upcoming Old Man and the Gun, and Bruce Willis’ Reprisal (among others).

At the drop of Efron’s name, students-turned-sleuths swore to find the actor and former-Disney royalty.

And they’ve got the tweets to prove it:

FYI NKU: The set is in the lot next to the honors hill/landrum.

Nothing like following your daily routine of going to the law library just to find it turned into the 70’s. @ZacEfron 🎥🎥🎥 #tedbundymovie pic.twitter.com/0SH305LUEJ

Some brief commentary on our culture of celeb vultures:

This is how I imagine it’s going to go down when we find @ZacEfron at NKU pic.twitter.com/M3QCgOYi9g

Sadly, some students lost their brief chance at a slice at silver-screen stardom:

was loitering around nku with Emily when the production manager of Zac Efron’s movie asked if we knew where our places were… unfortunately he figured out we aren’t extras and told us we couldn’t be in it :/

Hey, @ZacEfron, can you hook us up?

I think all NKU students should get to go see the new Zac Efron movie for free since he filmed some of his movie there. 🤷🏼‍♀️ Or at least get to see it first. Just an opinion.

FYI Carrie: The Musical will run from Feb. 27-March 1 in the Konstaninow Theatre. Kind of like ol’ Bundy, but a bullied teenage girl with a religious zelot for a mother and a hefty dose of telekinesis (so, bloodshed is the only similarity, really).

@ZacEfron since you’re at NKU, it would be cool if ya came to our rehearsal for Carrie tomorrow. 5pm. Pls.

We hear and feel you, Bradie:

next time i hear someone talk badly about nku i’ll say it was good enough for zac efron when he played a serial killer from the 70s!!!!