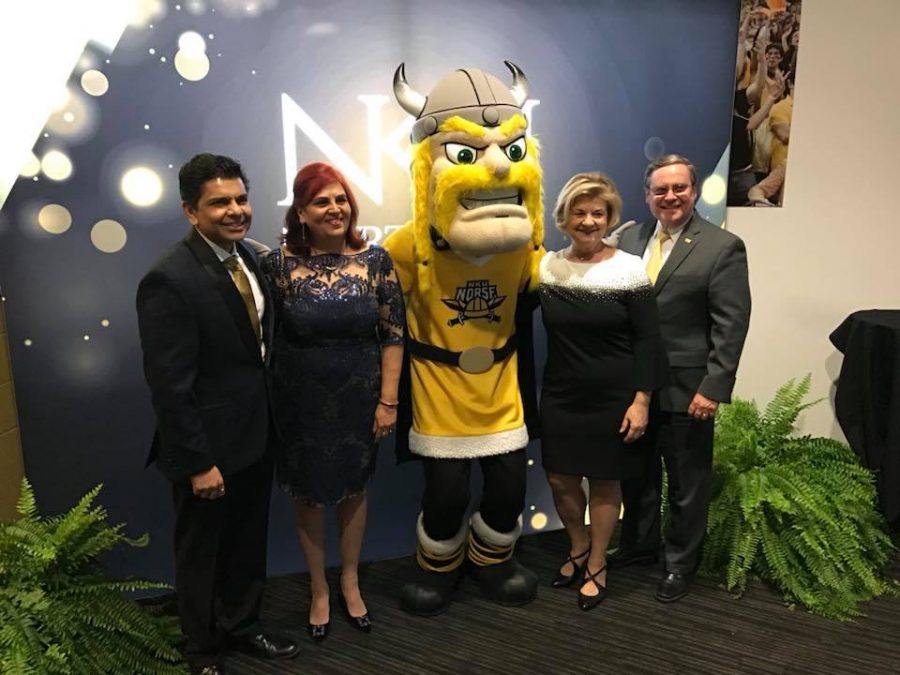 The interim and incoming president pose with Victor E. Viking before the Alumni Association Awards.

A glance at the Alumni Awards recipients

Over 700 were in attendance for NKU’s annual Alumni Awards celebration. This year, it served as the kick-off to the university’s 50th anniversary, in conjunction with homecoming week.

The event, organized by the NKU Alumni Association, recognizes four outstanding graduates for their impact not only on campus, but in the larger region, through awarded nominations.

As attendees milled about, dressed to the tens in a crowd that included our current interim president, Gerard St. Amand and incoming president Dr. Ashish Vaidya (as well as Victor E. Viking), The Northerner caught up with all four honorees.

Initially, after spending his undergraduate years at the University of Kentucky, Lunsford planned on attending their law school.

Instead, he ended up going to NKU’s Chase Law School, where he graduated in 1974. The Outstanding Alumnus Award recipient said that choosing Chase ended up being a great decision, citing a dual education where he worked full-time alongside attending law school at night.

“One of the things about the night school, there’s a lot of values that are developed, because people have kids and they want so badly (to go to law school) that they’re going to do it. It takes four years versus three,” he said.  “It’s arduous, you have to really pay attention to what you’re doing. I think I’m a good time manager, and it helped me become a good time manager.”

For nearly 40 years he’s proved himself a jack-of-all-trades: entrepreneur, businessman and thoroughbred owner are just a handful of his titles.

In those 40 years, his companies  in Louisville, KY, which include Vencor Inc. (now Kindred), Ventas, Inc., Atria Communities and Lunsford Capital have employed more than 100,000 nationwide.

He believes in the power of working hard and has worked to help students find the same success he’s seen.

His companies often hire students through cooperative education, where they can work full-time while attending school. Lunsford praised the Academy for Law, Business and Technology, which is named after him, for giving students this opportunity.

A native to the region, he said he believes in the values of Cincinnati and Northern Kentucky—be it the Catholic school system or agricultural community.

“I think people work here. People work. They always did, and I think that’s carried through over generations,” he said. “If you look at some of the corporate CEOs here in town, having not built my company here but having witnessed that, it helped me build my company in Louisville.”

Add another title to add to his long career: Lunsford also served a treasurer of the Kentucky Democratic Party and Kentucky Secretary of Commerce.He also ran for a seat in the United States Senate in 2008.

As for staying connected with NKU, Lunsford has spoken at multiple commencements and stays engaged with the network he found years ago at Chase Law.

“You have 700 people coming tonight. That’s big for an alumni crowd,” Lunsford said. “I don’t think you’d ever see (UK) get a bigger crowd than that, certainly (UofL) wouldn’t. That shows a lot, and those people are engaged. They’re proud of this school or they wouldn’t come.”

Dr. Emerine came to NKU 12 years ago as a Public Relations hire. Since then, she has served on the faculty senate every year, been the faculty regent for three, and taught courses in PR, communications and human resources.

During the event, she received the Faculty/Staff Strongest Influence Award. Her nominator credited Dr. Emerine for having a strong influence on their decision to pursue a Graduate Teaching certificate.

“This is huge,” she said. “I’ve gotten other awards where I’ve been nominated by colleagues, but being nominated by former students is a huge honor for me.”

Alongside the aforementioned courses, Dr. Emerine also teaches Pedagogy courses in the Masters of Communication Program. Before NKU, she attended both Kent State University and Purdue University, amassing degrees (a bachelor’s, master’s and a doctorate degree) in interpersonal and instructional communication.

Initially, she started her own undergraduate journey in dental hygiene. But, she decided that she didn’t want to stick her hands in people’s mouths the rest of her life.

“I wasn’t the only one in the class that didn’t want to vomit when I gave a public speech, so I figured this was something I was good at.”

When she came to NKU in 2006, part of the draw was the university’s small class sizes. She also wanted to be somewhere teaching-focused rather than research or reputation focused.

“I think the thing that makes it so special is that people get so vested in it,” she said. “It’s just a really special place where once you come to NKU, it’s kind of always a part of you and you keep coming back as much as you possibly can.”

The honor is one she said will top her list of NKU memories. She says that, at NKU, she’s not only been able to grow as a person, but learn from the students she teaches.

“We have so many first-generation students and we have so many students who are taking care of their parents, responsible for the finances in their home or they’re single parents,” she said. “There are so many things that are happening outside of NKU that impact who they are and who they’ve become, and that’s had a profound impact on who I am and how I teach.”

Ward started as at NKU as a freshman in the fall of 1981, where he says he was very involved in a number of organizations, including the Black Student Organization, student government and the Activities Programming Board. While there, he served as the student representative to both faculty senate and staff congress.

After graduating, he served on NKU’s alumni council for eight years, was to the foundation board where he served 12 years and two years ago became director meritas of the board.

Appointed by the governor, he then served on the Board of Regents. Now, he’s back on the foundation board.

Ward, who received the Distinguished Service Award, never really left the university since the first day he walked on campus in ‘81.

The irony of the award, after years of serving, is that he has no clue who nominated or voted for him.

“They have kept that entirely clueless from me, and I wanna know,” he laughed. “Either who to thank, or who to blame. And I think that’s even more humbling, because someone thought enough to do it at that level of anonymity.”

When he attended the university as a radio, television and film major he was among one of the first residents to live in the dorm halls. Back then, they only had what is now Norse Commons.

“The buildings didn’t even have names. They had alphabets,” he said.

Alongside his work at NKU, he also is president and CEO of the Kharfe Ward Corporation. He pours much of of time into mentoring current students. Right now, he mentors about 15 to 18.

“I think it’s important for our students to know that there are people who are vested in their success. There were people on this campus that were vested in my success,” Ward said. “This award, or any recognition I’ve received for my relationship with Northern, is because people invested in me. I do the same.”

Some of the things his own mentors saw in him are things he never, at the time, saw in himself.

Looking forward, Ward believes there is growth on the horizon that even NKU can’t foresee. It wouldn’t surprise him if we grow to 25,000 or 30,000 students.

“We’re young enough that Northern is not mired down in 150, 170 years of traditions that we can’t break or get out of,” Ward said. “It’s good to be in a place that is groundbreaking and getting to set those traditions in place.”

“My wife and I both came up to check out Chase (law school), and that was probably in ‘04 or ‘05. We were graduating undergrad, and I still remember that day,” Schroder said, adding that they asked how to get involved. Years later, he’s now the recipient of the Outstanding Young Alumnus Award.

In the three years he attended Chase, he said he grew legally through the way law school makes you think differently. Schroder ran for class representative and Student Bar Association president (he lost his first run, but won his second).

“I think that my fellow students wanted to know that I was working hard, and that’s just like a regular election,” he said. “People might not know a lot about you, but if they see how you approach the campaign, that will kind of give an indication of how you’ll do in office.”

Schroder currently represents the 24th Senate District in the Kentucky legislature; he also works as a public finance attorney at Dinsmore & Shohl LLP.

Elected to the Kentucky Senate in 2014, he represents Campbell, Pendleton and Bracken counties; serves as the chair of the Budget Review Subcommittee on Justice and Judiciary and the Senate Enrollment Committee and is the vice chair of the Senate Judiciary Committee.

He said he didn’t feel deserving of the award, but was honored nonetheless.

“To have people reach out to me and say that they were going to be there tonight–quite a bit of different people that I didn’t expect–is really special,” he said.

He and his his wife still live in Wilder and occasionally swing by campus to use its recreation center. And the growth, he said, has been amazing to see.

“My wife and I were here for three years. That’s three years of our lives that I think has really improved us,” he said. “So we’re happy to give back to NKU.”