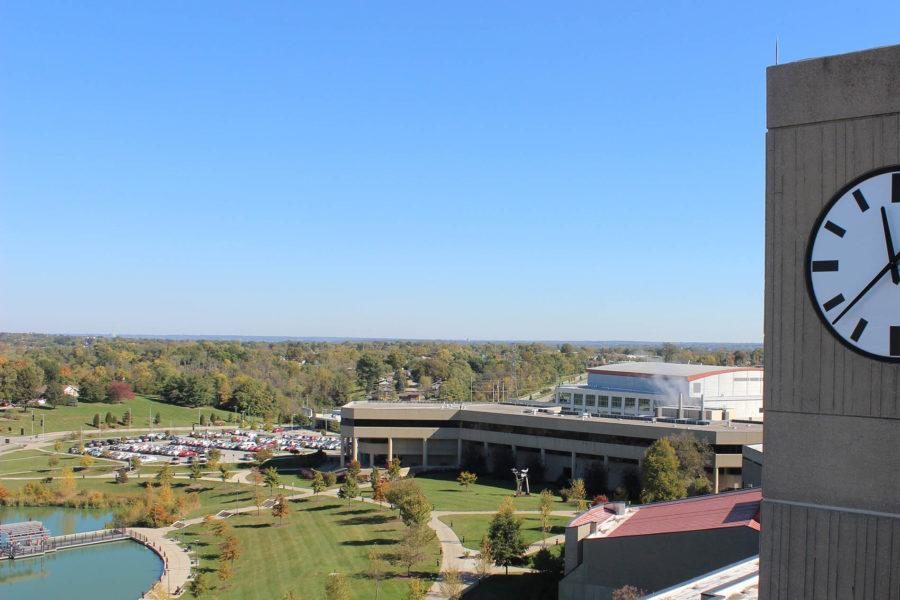 Jake Anderson created JumpSeat with Rachel Clark with the hopes of bringing community together with a cleaner online interface than other platforms like OrgSync.

Jake Anderson conceived JumpSeat–an interface with the goal of building a more natural community around NKU– during Northern Exposure as an incoming freshman.

Laid out in colored blocks–each notating a different section–the pre-engineering major described the website (still in a demo setup) as a mash-up between Craigslist and Facebook.

Originally, a friend of a friend– NKU student David Dodge–helped him create a working prototype, though rudimentary. Enter Rachel Clark: a fellow freshman majoring in computer science who said she’s been coding for six or seven years.

“I just put in a more flexible layout that if I add something to it the layout will respond in a nice way,” Clark said. “With [the original site] you had to change the layout manually.”

Using a card-like format as their basic layout–and a sidebar navigation tool that separates happenings into ‘hubs’ like STEM, Greek life, social and music–students could post study groups too, knitting subgroups within NKU’s campus together.

“The way we’ve been talking about it is almost a replacement for OrgSync because this would be exclusive for NKU so you don’t have to worry about on Facebook with moderating ‘Oh this person doesn’t go to NKU anymore, etc,’” Anderson said. “They already have the NKU login and password. The point of it is to bring everyone together–kind of like OrgSync does, but it can be confusing at times.”

Anderson, who is running for a seat as a freshman senator for NKU’s Student Government Association, noted that it could save time for Greek life organizations during recruitment season.

He initially proposed the site to SGA to see if it would be possible to implement JumpSeat into campus’ online community.

He said it was met with excitement by Evan Berkemeyer, secretary for university improvement, who said it could be picked up by SGA and proposed as legislation.

From there, Anderson said they would implement JumpSeat through beta stages. Living Learning Communities like STEM or Honors would be an ideal place to test the waters and see how students respond, he added.

“You let it grow there, let them test it out and exponentially increase the amount of people until it gets to everyone,” Anderson said.

The old prototype had blank entries that would need to be manually typed in. The new one created by Clark, Anderson said, is dynamic. She reprogrammed the demo site in mere days.

“We have some ideas for the layout we want. The card layout is going to be the basic building block of it,” Clark said. “We’ve talked about having an infinite scroll off to the side so we can have organizations in three different rows to see what all is available. For the most part, the front-end is working. All that’s left is to get the database back and started, hooked up and together.”

The new layout pulls from a database instead of having to change the layout manually each time something new needed to be added. In short, it’s more responsive.

Looking to the future, the freshmen estimated that–if the proposal goes through–it could be implemented in two years time.