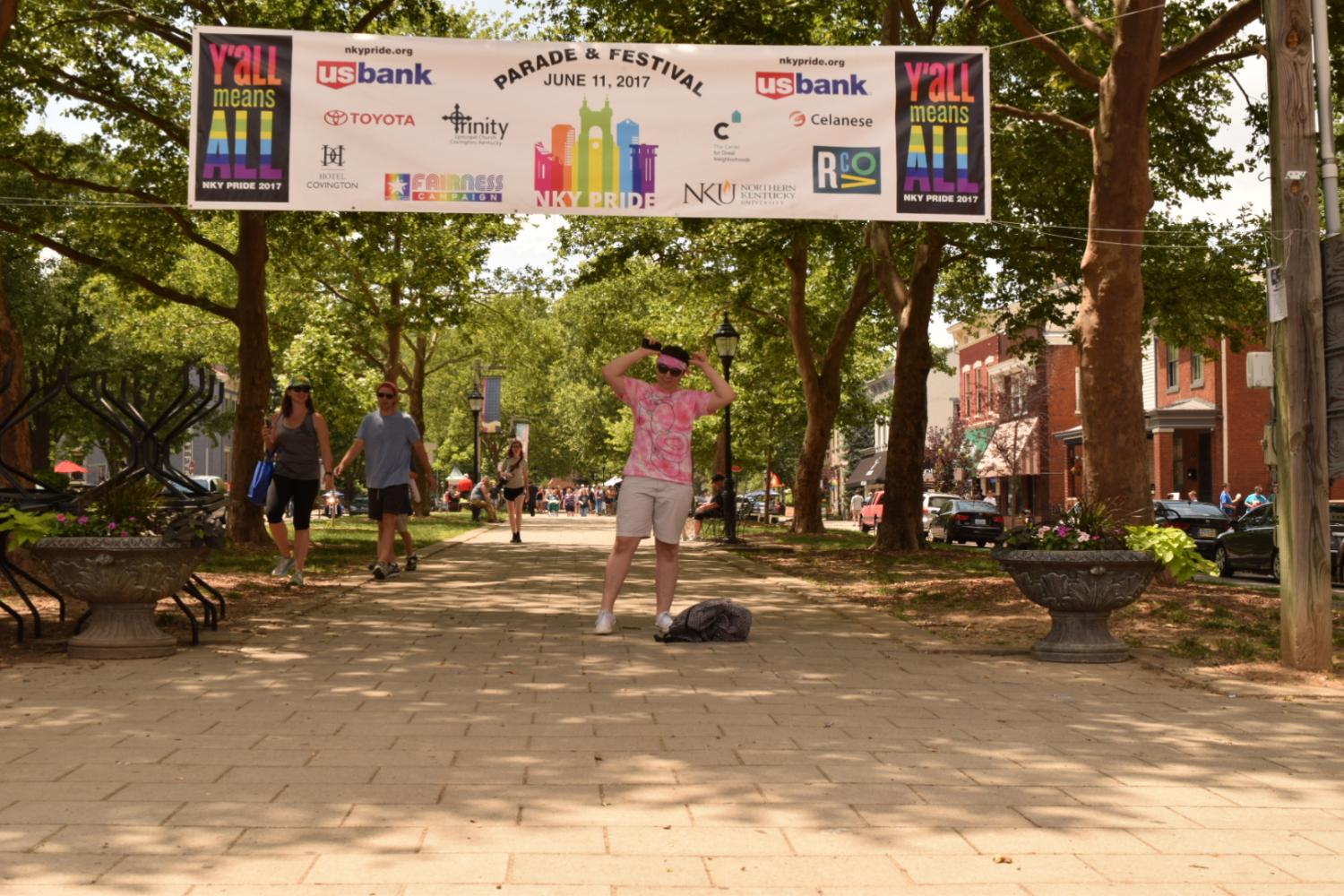 Bonnie Meyer was stationed at Braxton Brewing Company when group after group filed down the road, holding signs and flags representing messages that included the entirety of the LGBTQ rainbow and, in turn, a spectrum of queer identities.

Co-chair of the NKY Pride for five years and director of LGBTQ Programs and Services at Northern Kentucky University, Meyer said this was their most successful Pride event to date.

The march–with the theme “Y’all means all” — unfurled in Covington, commencing at Covington Landing before pooling together at Goebel Park, where a subsequent festival took place. Designated watch spots–including Trinity Episcopal Church of Covington, Ky, U.S. Bank, The Hannaford, Hotel Covington, Gateway Community and Technical College– as well as Covington businesses decorated their fronts with an array of rainbows to show solidarity with the movement.

It was the first time since the event was spurred eight years ago that Northern Kentucky Pride has included a parade, which was in part to show solidarity with the Equality March that took place on June 11–the same day as the NKY festival– in Washington D.C., where thousands rallied for LGBTQ rights.

“We had our date and all the marches were happening nationally.  People are looking for a reason to pull together right now,” Meyer says. “People want to support one another across differences, regardless of that difference. We see it in the women’s marches and the immigration marches and see it in marches for ethnicity and race and in general, equity issues right now are so at the forefront of everything, I think.”

Six years ago Meyer met her wife, Katie, in Covington because she was involved in a hate crime. She first got into LGBTQ work because of being discriminated against because of her sexual orientation, as well as being a high school teacher and being outed.

At Oxford, Ohio–where Meyer was working on her doctorate–she learned of the hate crime in NKY.

“Katie was organizing this reclaiming of the space–’Covington’s Night Out– and I showed up to her planning meeting and we were together immediately and ever since,” Meyer says. “That was six years ago. The hate crime was about seven years ago.”

A Covington resident for six years and co-chair for the festival for the past five years, Meyer said to think about the progress their community is emotional.

In the parade, Ben Baker, Vice Mayor of Dayton, walked with Jordan Huizenga, Covington city commissioner to show government support. Joe Meyer, mayor of Covington,  issued a proclamation in support of the festival where hundreds share unabashed pride in their identities.

State Representative Arnold Simpson, Reverend D’Angio of Trinity Episcopal Church, educator and activist Paula Ison and business owner Amy Mobley, all participated as judges for the festival, where categories included best overall entry, best performance, best social commentary and best interpretation of the theme.
All”
A group of Fort Thomas high school students who have worked to implement a gay-straight-trans alliance within their school marched alongside other groups, as well as their parents.

“As an educator and as someone who used to be in K-12, to see those kids walk in the parade with their parents–just out and open and being supportive and to just hear people cheer for them–is the kind of stuff that pulls on my heartstrings,” Meyer says. “I couldn’t be prouder of Covington today. I have a lot of high hopes in what fairness and equity looks like.”

“I love to see how many adults with younger people there are, whether they’re family members or some kind of other support,” Loftis says.  “That’s been really awesome.  As pride has evolved, it used to be people coming out to represent themselves. Now I’ve seen a lot more support.”

LGBTQ Programs and Services was founded only a few years back, and Loftis noted that several alumni visited the booth in support of the office. She said many wished the office was in place when they attended. 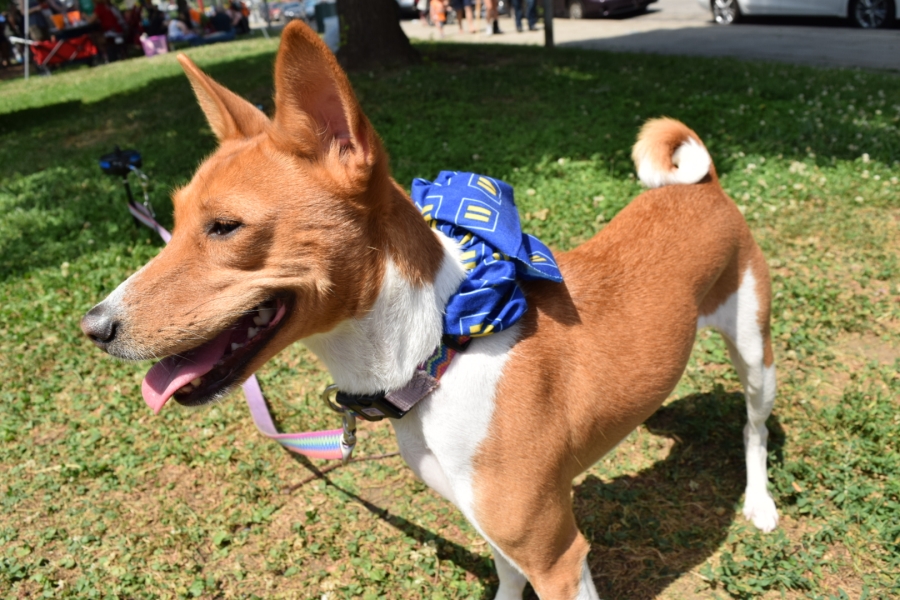 The university is rated as a 4.5 on the Campus Pride Index and recently ranked 31st on Best LGBTQ colleges list. Meyer said that she’s proud of her institution; for her, the administrative support is there. She doesn’t feel as if she has to convince them of the validity of issues for LGBTQ students.

For CIT student Noah Pittinger, who was handing out resources and information at NKU’s booth, the event was about empowerment.

“I think it’s really important to remember that the people marching in the parade were marching for themselves as being LGBTQ,” Pittinger says. “There are plenty of people in the community that are not so forthcoming. For them to be able to look and know that this community is supportive of them is a huge deal.”

As Meyer pointed out, some may wonder why Northern Kentucky needs a festival of its own when a large Pride event happens across the river. In short, she said it’s because they’re Kentuckians, not Ohioans.

“We have a different government, we have different elected officials and different challenges than folks that live in Ohio,” Meyer says. “In Kentucky, we only have eight cities in our entire commonwealth that have fairness ordinances”

The Fairness Campaign is a Louisville-based lobbying and advocacy organization that focuses on preventing discrimination based on sexual orientation and gender identity through ordinances.

Cities within Kentucky aside from Covington that have implemented fairness ordinances include the following: Louisville, Lexington, Henderson, Midway, Danville, Morehead and Vicco.

“I think it’s shameful that Covington is still the only city in Northern Kentucky with a fairness ordinance,” Meyer says. “ In the fall, once we move beyond pride season, we will definitely start with our community partners and residents and additional river cities in working toward fairness ordinances across Kentucky.”

Centered in Covington, the festival doesn’t try to be giant. Rather, it thrives on a community-based atmosphere that brings together the queer community, their families, and their allies.

With the Washington D.C Equality March happening on the same day, the timing to implement a parade felt right.

“People are willing to stand up and practice some allyship right now. We started talking about having a parade.  The time was right. The committee was right,” Meyer says. “We have to do this. We had no idea what it would like; we had no idea how to begin the process of compacting the festival, the parade and the after party in one day, but it has been by far the most successful Northern Kentucky Pride Festival we’ve seen.”

After the parade and festival, another new segment was added: an after party at Hotel Covington. In the past, the event also included a bike ride and a brunch, which were cut this year. However, Meyer said that they may look to bring those events back next year.

In the end, the importance of Meyer’s work comes down to putting a face to an issue and working towards queer visibility.

“Harvey Milk, he said that you have to put a face with an issue. I believe that. It’s the work that I do at Northern, you have to put a face with the issue. Not everyone can do that. Not everyone can be out. I’m in a position where I’m able to be out. It’s part of my job to be out,” Meyer says. “You change people by doing this work, by being visible and by continuing to forge forward, and build relationships, partnerships and talking to people who don’t necessarily agree or not. We need to have those conversations within our communities”

Change starts locally then grows, Meyer said. With a strong community in Northern Kentucky, she hopes that the same strength spreads all the way to Frankfort.