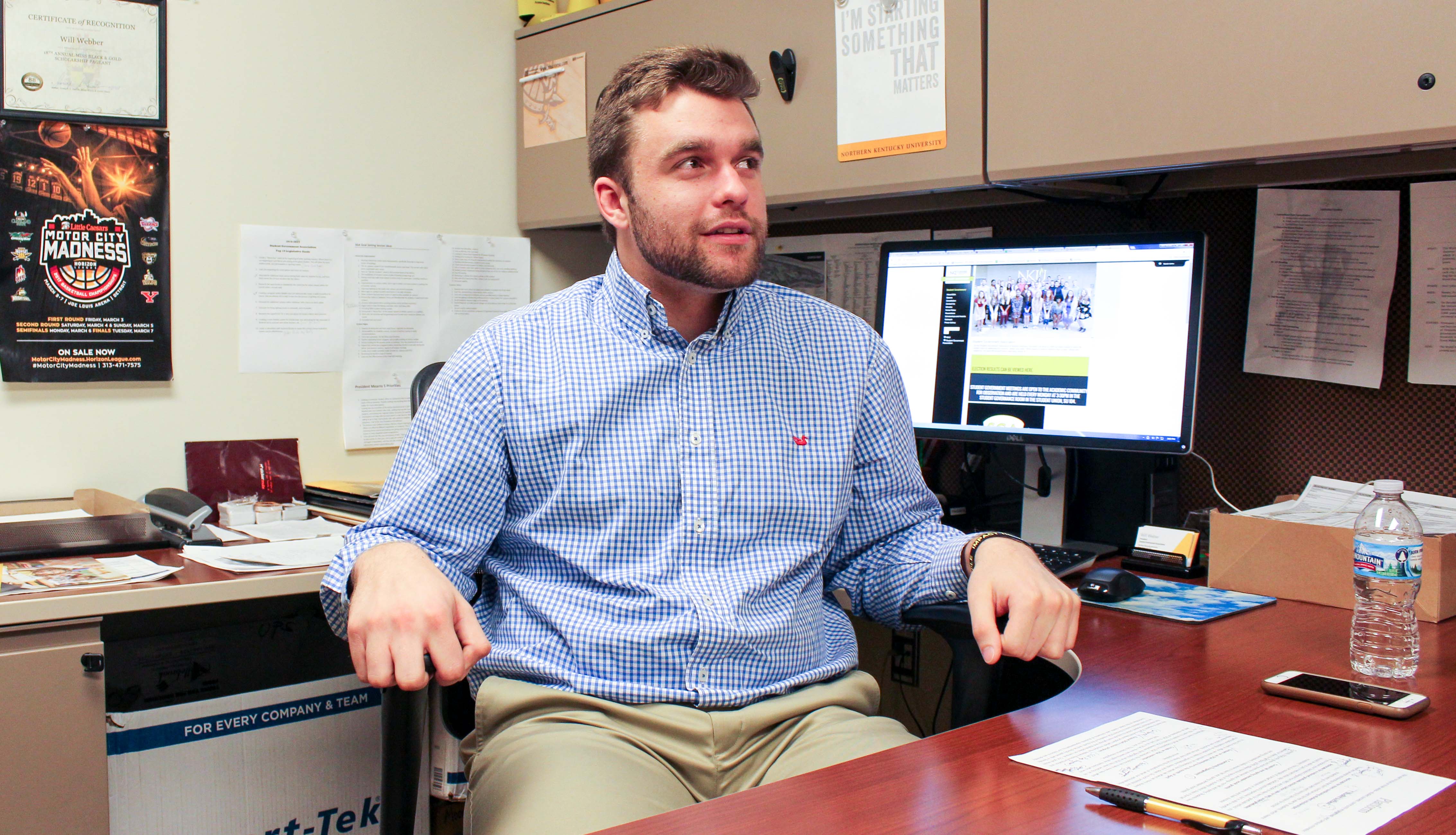 Will Weber served as president of SGA throughout the 2016-2017 school year alongside Ellen Wilshire as vice president. (Nicole Browning)

Will Weber served as president of SGA throughout the 2016-2017 school year alongside Ellen Wilshire as vice president.

Weber looks back on time as SGA president

Preparing to graduate after five years at NKU, Will Weber looked around at his office. The walls were covered in pieces of NKU memorabilia that he had collected; pictures, posters, even a foam finger.

Over the last year serving as SGA president, the office had become his home.

“It took me almost halfway through my term to decorate, and once you decorate it’s like I’m losing a piece of myself,” Weber said. “People know they can always come in and visit and talk to me about anything and everything.”

Weber’s first Monday not spent at an SGA meeting in three years will be April 24, where president-elect Sami Dada will be taking over.

“I’m excited about having Mondays at 3:30 free,” Weber said. “My first Monday off, I might just visit SGA and see how the new group’s doing and just kind of reminisce. Take a different perspective and sit in the audience for once and kind of watch everything happen.”

Weber said what he will miss the most from his time as SGA president is being surrounded by people who are passionate about the organization and bringing opportunities to students.

“It’s being around like-minded people who are just so passionate,” Weber said. “Because at the end of the day, when you get into the organization, you realize that you are a servant. You’re supposed to be serving the students.”

While campaigning with Ellen Wilshire, SGA vice president, Weber said they focused closely on student success as part of their platform.

“We made student success the first part of our platform because we realized that at the end of our term, what we could really hang our hat on and say that ‘We’re proud of this one thing,’ would be the impact we’ve had on student success,” Weber said. “I think we’ve gone above and beyond our hopes of what student success would look like.”

When it comes to student success, one thing Weber was especially proud of was the outcome of NKUnity, a campus event hosted in January meant to promote diversity and inclusion.

“Nobody would’ve ever thought that we were going to have this at the time we were campaigning, but we got the right people in the room, we got the right ideas flowing, and then NKUnity came to fruition,” Weber said. “I think it has had a lasting impact, so I’m very proud.”

Daniel Nadler, vice president of Student Affairs, works closely with SGA and said he appreciated Weber’s efforts to see that everyone felt accepted into the campus culture.

“Especially with this being my first cycle through the NKU experience, I’ve really pushed myself to get out to a lot of different events and activities, and often I see Will there,” Nadler said. “There’s no doubt he cares very deeply about people, he loves this institution, he’s worked hard to try to bring a greater sense of school spirit and vibrancy.

“I think he’s worked hard to try to get people together.”

Wilshire also said she thinks Will’s desire to help others and positive attitude has been a large part of his presidency.

“He’s a hoot, isn’t he? Yeah, Will’s a good guy,” Wilshire said. “I think he’s definitely a people person, to say the least. He wants to make sure everybody’s happy. He definitely is one to put other’s feelings before his own.”

Nadler said he hopes to see these characteristics in the next SGA leaders, including Dada, vice president-elect Erica Bluford, and SGA as a whole.

“You know, kind of take a positive approach and work hard to bring people together. Work hard to always make positive contributions,” Nadler said. “Not just exclusively about Student Government, but kind of the whole campus culture.”

Wilshire has worked with Dada in the past and met Bluford; she said she sees good things for them in the future as SGA leaders.

“I think they’re going to kill it; they’re going to do a great job,” Wilshire said. “I wish them nothing but the best of luck. And if they ever need anything from me, just come find me. I’m easy to talk to. I’d love to help out.”

Weber said that the advice he would offer to Dada and Bluford is to always remember why you ran for this position.

“There’s a lot of times in the position you kind of get bogged down, you might have a lot of meetings on Monday, you might have this class, you have to run over here and run over there,” Weber said. “But right when the clock turns to 3:30 on Monday, you have to put that hat back on and say, ‘I ran for Student Body President’ or ‘I ran for Student Body Vice President.’

“‘I want to be a leader of this organization because I see the opportunity this has to help people.’”

Weber also said it’s important to take as many opportunities as possible during this time, because you don’t realize how quickly the time goes until it’s almost over.

“Go out and see all the different events that are on campus,” Weber said. “I’ve tried to put up a wall of all the different things that have happened during my year and events I’ve gone to and just all the fun I’ve had over the year.

“Never be afraid to be a little bit risky and to try something new. Because you never know who might be interested in SGA.”

While sometimes the job can be overwhelming and difficult, Weber said the impact you get to make on the community makes it all worth it.

“The wisdom I try to give to Sami and Erica is to have fun along the way because as much as I’ve enjoyed a lot of the work I’ve done, I’ve been so enthralled in accomplishing our platform points, and making sure that the promises we make, we deliver on,” Weber said. “At times you kind of lose sight of all the fun things that are going on around you.

“But realizing the work that we’ve done and the amount of time we’ve spent to accomplish this, you can look back and say, ‘It wasn’t really about all the memories that I wish I would’ve had, but it’s all the opportunities that I’ve given to all these other students.’”