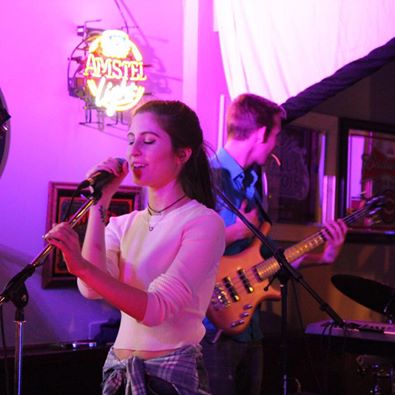 Olivia Ryan has always had a love for music. In her own words, music is her plan a, b and c.

Fingers flitted across a midi keyboard, faint synth infused pulses. Olivia Ryan hummed along to her own song, dipped and dried in dreamy low-key pop.

Recording an album is something she’s always wanted to do.

Clever Records, a recording studio in Newport, KY, gave her this opportunity.

Ryan’s first album, “Only a Dream”, is set to release sometime in late November.

The studio is relatively new, set up within the founders’, Will Huber and Justin Schmidt, home.

“I could have made one on mine own, but it wouldn’t have been as quality,” Ryan said.  “I was kind of waiting for something to happen. I know that sounds anti-productive, but Justin messaged me on Facebook and was like ‘Hey, do want to record at our house? We set up a recording studio.’”

Will Huber left the studio room briefly to retrieve a 12-string guitar, experimenting with layering it onto one of her tracks, “Run.”

A black curtain blocked out the torrent of rain snaking its way through the streets. It was around noon. Ryan and Huber worked past four on the album before mapping out their plan for the next session.

Placing a six-string guitar back on its stand, Huber asked Olivia what she thought the track needed. He played it repeatedly with discernment, searching for sounds to cut out and places where other sounds could be added.

Ryan has an ‘it’ factor that many singers don’t possess, he said.

“I would consider Olivia a crooner,” Huber said.  “She has kind of a casual thing, where she’s not Christina Aguilera up there belting, but it’s crooning. There’s still a lot to be learned and a long way to go, but I think it’s all there.”

Self-described as ethereal and ambient, her favorite thing to do is to sit down with her keyboard and voice. Some of her more stripped down tracks will include “Jupiter”, “Nova” and “Only a Dream.”

Ryan said these tracks were some of her favorite since they felt true to who she is as an artist.

Removing the clutter is something that translates both to her musical taste as well as her personal philosophy, which was central to her album. Ryan wrote the entirety of her album.

“Everyone is freaking out about things that don’t matter, and forgetting about the things that actually do matter, like family and everyone around you, and doing things you’re passionate about,” Ryan said. “Everyone is coming home and complaining about their 9 to 5 job. You don’t have to do that.

“You don’t have to do any of that. There was no rule when we were born that we had to do anything.”

Though she majors in psychology, she doesn’t plan to do that for her life. Music, she said, despite people telling her that psychology would be a good plan b, is her plan a, b and c.

She hears students complain about hating school, she said, and if they do they should go home and figure out something they truly want to do.

“You don’t want to be stuck with something that bores you,” Ryan said. “There’s so many other things that you can do. You don’t have to limit yourself.”

Melding together relatability and her own personal musings, Ryan described her lyrics as a stream of consciousness, a string of wandering self-discovery, collected from her life between the age of 18 to 21.

Taking out a carton of raspberries, Ryan popped one in her mouth. Huber stood up to leave the studio and turned up the music slightly.

Leaving the studio and listening from another room gives clarity on if the track is quality, Huber said as he slipped off his headphones and went to the foyer.

“It’s nice working with people my own age that are seeing my vision for everything,” Ryan said.

Huber dug around in a backpack and produced a smaller recording device, “Clever Records started on this thing.”

Huber has had an interest in recording and producing music since his sophomore or junior year in high school. It started with smaller equipment, no real studio space and a penchant for music.

It became, though humble in size, a fleshed out recording space with an array of equipment. According to the Clever records website, this includes 22 pieces of audio and video equipment and 11 different instruments.

Along with little recording experience outside of her own bedroom, Ryan said she had never really recorded her own material in front of people.

“It was kind of nerve-wracking, but once I started sharing [my songs], the better I could actually write them,” Ryan said. “All of those original songs were just floating around in my head and once they were solidified I could write more things.” Instead of being on her own with only the accompaniment of a keyboard, Ryan has also been practicing with a band.

Collaboration often leads to ideas she had never thought about implementing into her work, Ryan said. They feed off of one another’s creativity.

On October 28, Ryan performed at Yesterday’s Old Times Saloon backed by a band at a bar, saying that her more sleepy, ambient solo sound wouldn’t fit the atmosphere of a bar scene as well.

This was her first performance. She has performed a few other shows since her debut.

“That was kind of hard at band rehearsal because I love the sleepy [sound]…” Ryan sang a few soft notes wrapped in cozy drowsiness. “It’s kind of hard to play that a bar.”

Showing her work to strangers is easier than sharing it with parents and close friends, Ryan said. It feels more awkward because the people actually know you and lyrics are often dissected more closely.

Music is something, Ryan said, that has always surrounded her. Her brother sings as well and her father has always played instruments and sang, though, she said, he’s more of a blues guy.

“My family is known for being hummers,” Ryan said. “My boyfriend [likes the quirk], because when I get home from work I’m always humming, and I don’t even realize it.”

When she comes home, her family often asks if they can listen in on the progress. They have been, and always have been, supportive of her musical endeavors, Ryan said.

“Olivia’s gift of music is so heartfelt,” Jennifer Ryan, her mother, said. “One is truly transported to another dimension of angelic peace and joy when she performs.”

Her brother, Phillip, said that Olivia’s voice is one that the world needs to hear, calling her talent a raw, sheer gift that she poured her hard work into.

Ryan has also found support from within herself. Coming into the process, she didn’t know exactly what she wanted. She was more lenient in accepting opinions about her music.

“I know myself as an artist more and what I want my future things to sound like,” Ryan said. “I’ve learned a lot about myself coming in here for the few short months that I have.”

Huber said he has grown alongside her, in his own talents and expertise.

After nearly five hours of editing and experimenting with her tracks, Huber began going over what needed to be done for the next session as he shuffled about the room putting up equipment.

Ryan slung a small backpack over her shoulder, humming faintly once again.

Two musical artists that inspire her are Lights and Oh Wonder. Though throughout the recording process she’s learned that she can’t compare herself to other artists, she said.

Ultimately, she said that she is her own artist.

“I’ve been able to separate myself,” Ryan said. “I love Lights and Oh Wonder, but I’m not them.