The BFA 2022 Senior Exhibition is running Nov. 23 to Dec. 9 in the Fine Arts Center third-floor galleries to showcase the capstone projects of graduating seniors as they gear up to launch into their professional careers.

With exhibits featuring students in the visual communication design, spatial arts, drawing and painting programs, the exhibition is flooded with diverse forms of emotional expression and functional concepts that address real-world issues and interests.

From a board game concept visually inspired by the Work Projects Administration’s National Parks posters from the 1930-40s to a collection of sullen paintings that depict an artist grappling with societal conventions while developing a true sense of self, the exhibit displays the embodiments of the bubbling passions and influences of the dedicated artists cultivated in the School of the Arts.

Director of Galleries and Outreach Sso-Rha Kang has been plotting the creation of the exhibition since early in the summer, corresponding with students to understand the format and breadth of their projects. From a technical gallery design perspective, understanding how the projects would turn out ahead of time was crucial to ensuring each student could carry out their vision without compromise.

Kang emphasized that despite being the finale to these seniors’ undergraduate degrees, the BFA capstone experience is intended to give students the means to embark on their artistic, creative journeys with a remarkable project under their belts that reflects their personal passions and strengths. Wandering around the exhibition, the diversity of themes, styles and aesthetics one can encounter speaks to the mingling of creativity and promise at NKU.

After speaking with Kang about the background of this year’s exhibition, I took a peak at the gallery myself, giving each exhibit the due diligence the artist’s rigorous efforts deserved. Being personally compelled by a few of the artworks, I’ve highlighted and interpreted a few works here, but I encourage all to bear witness to the exhibition themselves and spend some time contemplating the riveting messages of these artists.

With four ginormous oil-painted canvases, Wenger explores the lore of paranormal storytelling and depiction with spine-tingling vividness. Informed and inspired by true stories Wenger learned about through interviews, the artist reiterates haunting spirit-seeking incidents as figures stead in shadow-bathed scenes. Paintings “Haunting of Samay” and “Stay With Me” furtively incarnate spectral entities with technique that at first glance only looks like light discoloration of the background; one double at the blotch of discoloration is all it takes to discern the horrifying entities. When I took notice of the spectral entity in “Haunting of Samay,” goosebumps sprawled about my skin, triggering me to take a look around and ground myself in the real-life surroundings inside the intimate, dimly lit painting gallery.

Ideas of dread and expectation of supernatural presences are also explored in the paintings Emergence of Specter and Awake Past Three, as painting subjects wander through eerie scenes as if convinced they will stumble upon something that is not evident to the viewer. As humans, we seem to outwardly tell ourselves we don’t want to be face to face with spirits of the unknown, but the temptation of indulging that curious and overwhelming hunch would leave us reeling for what to do next in the event of making contact with a supernatural entity: perhaps the exhilarating experience we secretly like to fantasize about.

For some people, these types of encounters and stories are enthralling; for others, they are nightmarish. Imagining yourself as the unsuspecting subjects of these paintings—pondering all the spooky stimuli and gut-wrenching realizations that may transpire—made for a singular viewing experience. 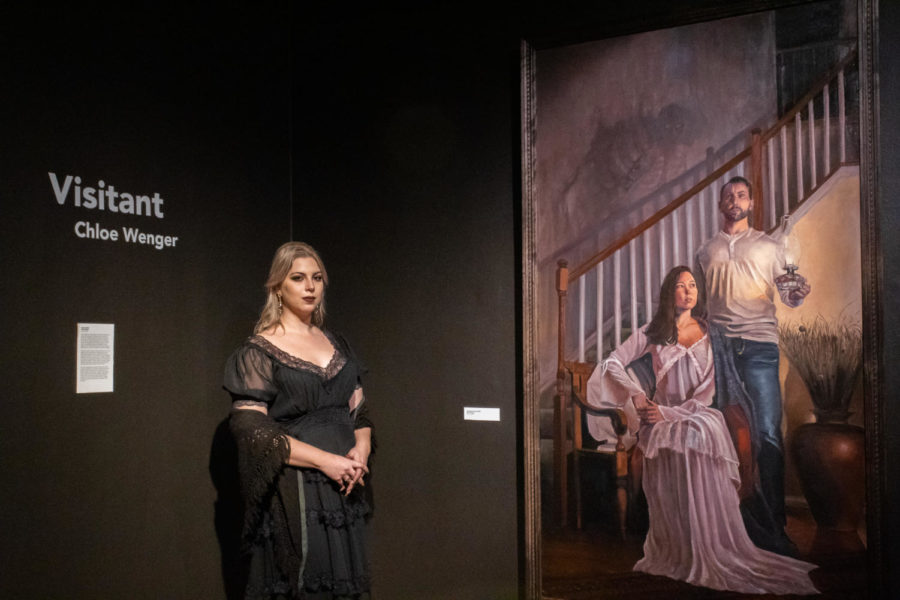 Drawing inspiration from the elongated and ephemeral metamorphosis process of the mayfly, Burgard’s transitional, enigmatic existence is paralleled to that of the insect’s through this work. A creative process that surely required loads of internal questioning and growth-inducing self reflection produced a slew of ceramic pieces that visually conflate his human experience with the mayfly’s development.

With visceral details of the organism’s development colored by earthy shades of greens, reds and browns, and occasional human-like facial expressions melding into the reimagined natural process, one may be empathetic of the conveyance of feeling perpetually in between stages. I understood the symbolism of a mayfly’s molting—shedding old and no-longer useful parts to prepare for growth—to express his feeling of being convinced that change is destined because of the unsustainability of his present state of being. And front and center of the exhibit rests a hatched mayfly with a weary-eyed look of gleeful youth. One can only hope that the uncomfortable grips of transformation bring about optimism in the end.

We are not alone in maneuvering the transformations of life, which Burgard is keenly aware of. Depicted through his piece “Holy Family with the Mayfly,” a nine-piece ceramic collection on the left wall of the exhibit that represents six siblings through six small larvae placed around two abdomen-like figures, representing his parents, as if separate parts of a combined unit. Posted above and center of all these pieces is a coiled, reposing mayfly representative of looming and inevitable death, according to Burgard. Every individual incurs their subjective portion of hardship and change. Having a support system to grow with and depend on through these processes can be both an asset and a source of fear, depending on how you frame it. 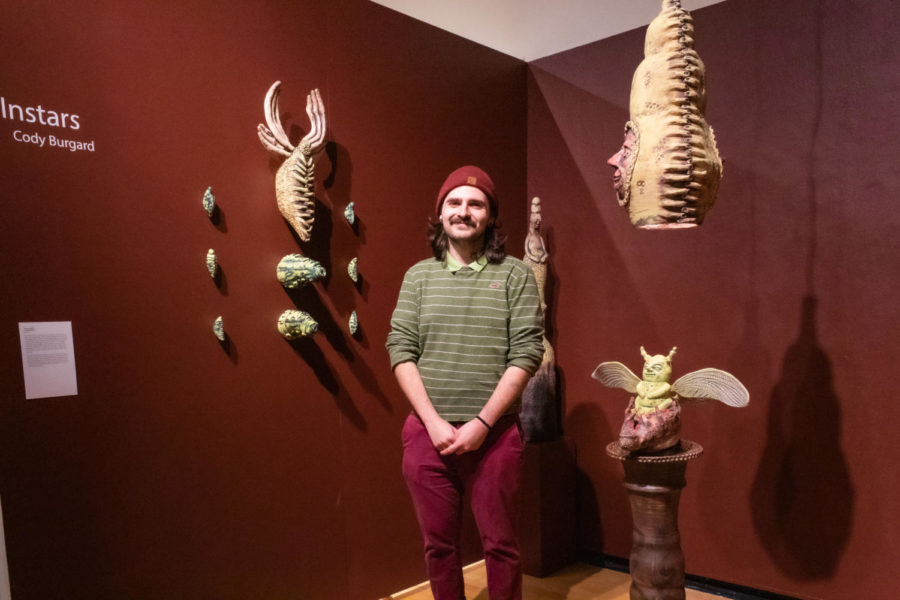 Clowns: a timeless icon of supposed but distorted happiness. Rarely do we actually associate clowns with good times, but we all recognize the association. With a series of clown ceramics wearing the same melancholy countenance, Fraiture communicates feeling and meaning with contortion of the body and clothing as well as colors and patterns painted on the clowns’ skin. According to Fraiture, the consistency of the facial expression is a homage to his lingering battle with depression. Each clown and its unique position and garb reflects a particular life experience. These clowns, with theatrical poses, tattered clothing and dismally farce skin brandings channel a muddled pursuit of happiness.

The theme of irony and dissimulation is present through the exhibit, with pieces titled Dazed and Coherent, Dressed For Failure and Horrible Sanity. It’s as if there is nothing these clowns can do to pull themselves out of a slump loathing and apathy. Apexing the moody and grieved tone of the exhibit is “Dopey’s Uneasy Omen,” a sadly grand portrayal of a deeply hurting clown face, composed of flowing shapes and colors that melt into a drastic semicircle of a frown. 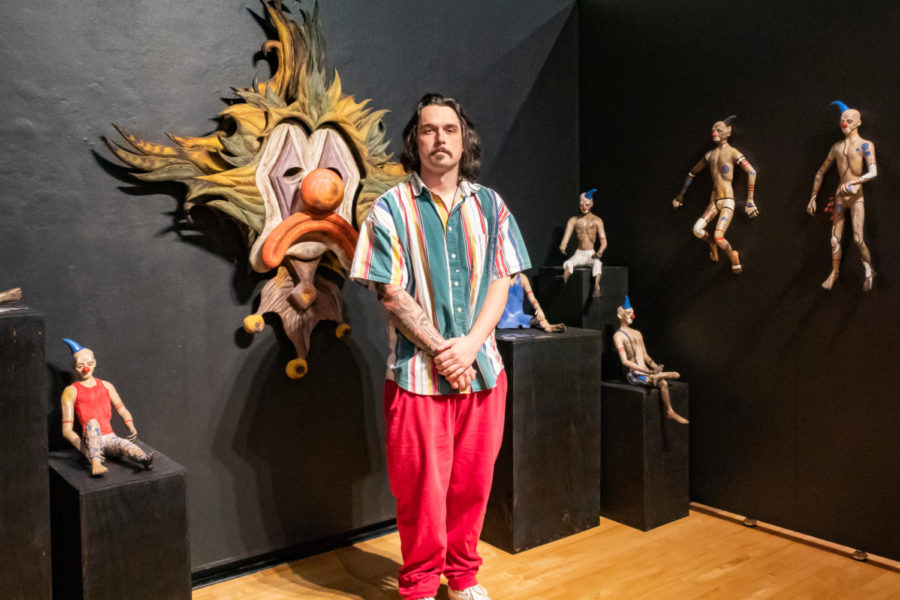 Pointers is a concept model for a service that provides education and resources for parents of deaf children to help encourage parental bonding and the instillation of pride in one’s natural condition. According to the artist notes, 95% of deaf children are born to hearing parents; only 10% of those parents will use sign language to communicate with their child. This rift between a child and their parents can create a sense of burden and isolation that no child inherently deserves. Pointers, a deft reference to the gestures of American Sign Language and the educational purposes of the project, develops a vision for a brand that would promote a deaf child’s healthy and holistic development by inspiring families to learn and celebrate progress. Visually, the project leverages calm and dark hues and witty quips that help the topic come off as approachable but crucial. 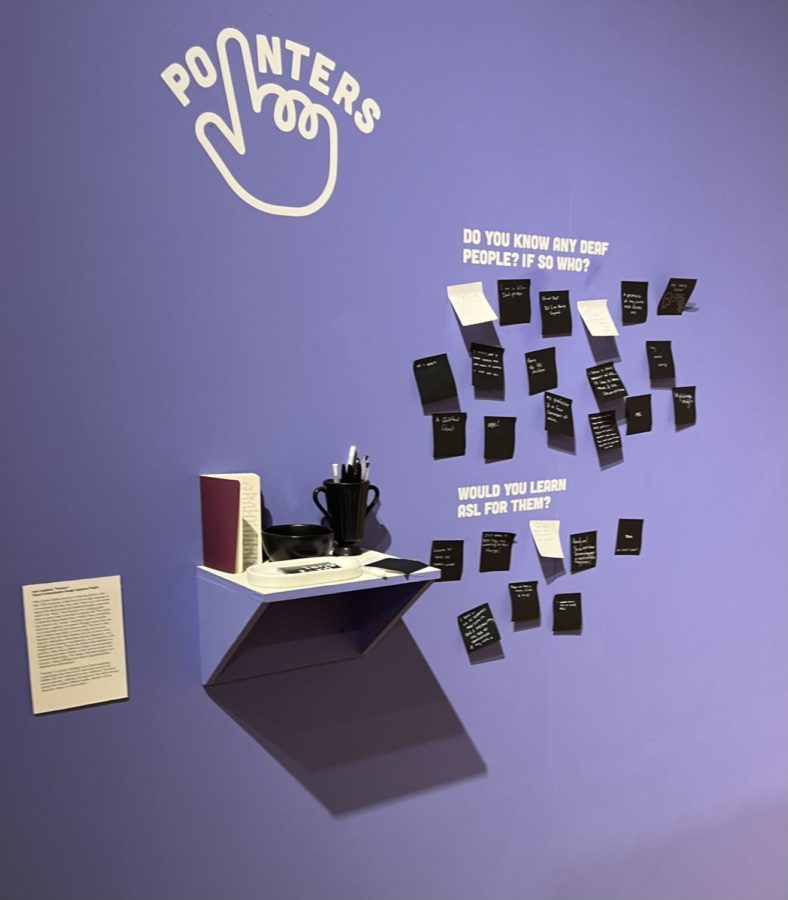