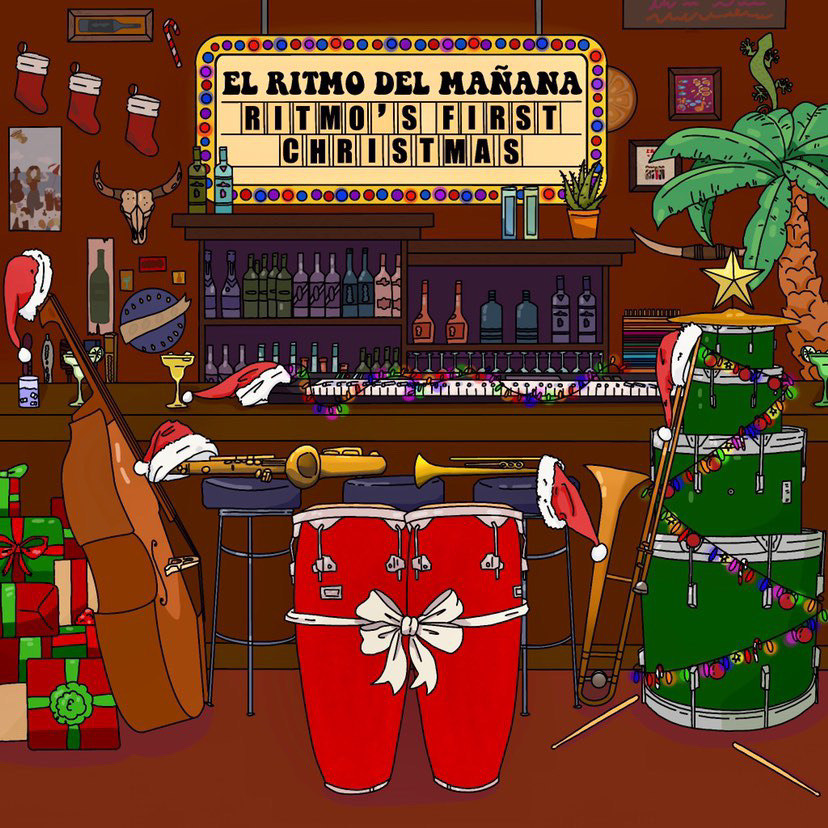 Two holiday seasons have passed since the conception of El Ritmo Del Mañana’s second album, Ritmo’s First Christmas. As the third season falls upon us, the latin jazz band is set to drop the project on Dec. 2.

Cincinnati-based band El Ritmo Del Mañana is led by 2021 NKU graduate and percussionist Zion Rose Sosa. She started the band while in the jazz studies program at NKU’s School of the Arts. Having been playing latin jazz with an NKU ensemble, Sosa was piqued by the cultural roots and style of the music and eager to unite with musicians to jumpstart her opportunities to play gigs.

The band originally consisted of peers from the NKU jazz combo and the Cincinnati Conservatory of Music. Having shifted through a few personnel changes over the years and recently, the recording of Ritmo’s First Christmas will feature Eric Lechliter on trumpet, Christian Paradiso on saxophone, Spencer Merk on trombone, Ryan Jones on piano, Derek Johnson on the drumset, Justin Dawson on bass and Sosa on percussion.

One festive January evening in 2021, El Ritmo Del Mañana got together in Sosa’s basement to livestream a Christmas performance. Having made an annual Christmas show—which they ironically hold after Christmas—a tradition in prior years, but having the continuation of the tradition thwarted by COVID, Sosa rallied the band and held the livestreamed show in her basement to keep the tradition alive.

That evening, the band reiterated familiar Christmas favorites with latin jazz flavors, imbuing them with latin dance rhythms and improvised solos while preserving every bit of the tunes’ seasonal grace.

After the Christmas performance, Sosa was determined to record the music they played to be released to the public as an album. With its double-sided appeal as a jazz project with a Christmas theme, Sosa hopes the project charms listeners with its dance-inspiring latin jazz qualities and finds longevity in its seasonal relevance.

The band recorded the project in November of 2021 with the help of now-graduated NKU audio production students Johnathan Burlew and Alexis Gabbard, who reached out to Sosa searching for music to record for a curriculum project. Sosa seized this opportunity, and after the cumbersome process of settling on a recording day compatible for everyone’s schedule, the band recorded the project in a single seven-hour session.

The band recorded that day with most members getting minimal sleep coming off gigs the previous night and having to wrap up by 5 p.m. to play gigs and attend to other commitments.

After tirelessly recording the project, the music had yet to be mixed and mastered, and artwork and CDs needed to be produced to fully prepare the album ahead of its release.

The minuscule one-month gap to finish packaging the album in time for the Christmas season proved an insufficient amount of time, leaving Sosa to complete these tasks throughout 2022 and positioning the album to drop on Dec. 2 with a supporting single released on Nov. 25.

Released on the Golden Mean Record Label based out of Cincinnati and mixed and mastered by Brandon Coleman, the album will feature recognizable Christmas tunes in varied, embellished forms to enliven holiday celebrations. Finally making its way to listeners’ ears and celebrations two years after that fateful night when the band gathered to leave joyous impressions in dreary times, the music will now stand on its own to the same effect.

El Ritmo Del Mañana will be spreading their holiday cheer live for their Christmas show and album release at 7 p.m. Dec. 2 at Caffe Vivace. They will also play the Boone County Library at 7 p.m. Dec. 9.