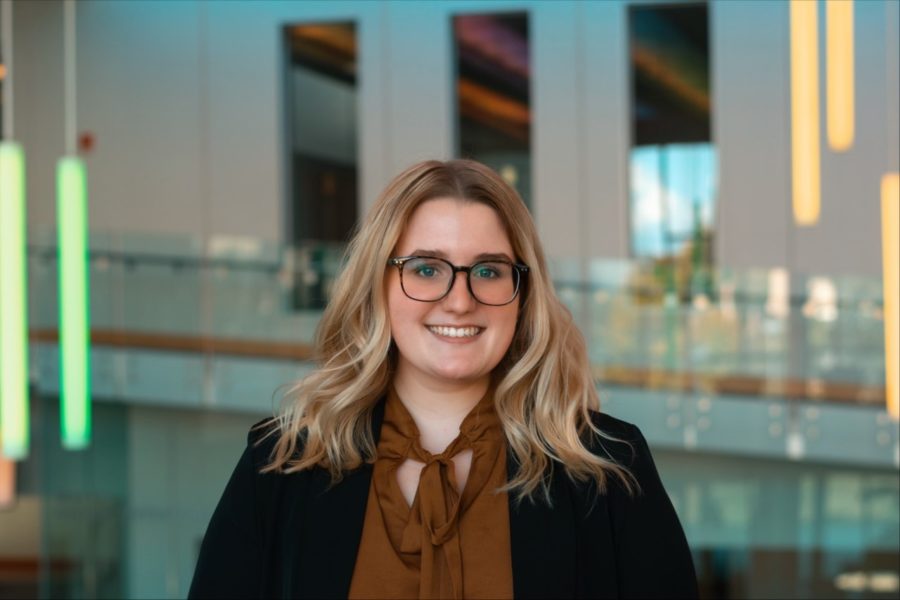 I transferred to NKU the second semester of my freshman year where I had already been an elementary education major and then came into NKU as a computer information technology major. I thought being a teacher was something I wanted to do, but soon after observing classrooms I realized it wasn’t for me. CIT was something I thought I could potentially do well in, but math is not my forte, and what I didn’t know was that CIT involves a lot of math.

In April of 2019 I sat in my car before my STA 205 class and scrolled through the many different majors NKU offered. I knew I couldn’t pursue CIT any longer and felt as if I was wasting time as my general education requirements were almost complete. I had to pick a major.

So, I did. My choice was journalism. I remember declaring my major change and telling myself that this had to be the last time I was going to switch majors.

What I should add, however, is that I have always loved to write. Throughout elementary, middle and high school, I excelled in writing and English more than any other subjects. I found that writing offered me a chance to say all of the things I wish I could have said out loud as a very shy and quiet kid.

I had always been exposed to news growing up; my parents had a TV in our kitchen and dining room (and still do) so we could watch the news during the evening. When I woke up, the news was on in the living room. I would even sit in my room as a kid and watch the news sometimes just to learn more about what was happening in the local area.

With watching the news came watching presidents get inaugurated, whistle blowers coming forward and voting information galore. Diane Sawyer and David Muir were my favorite people to watch on the news.

It wasn’t until Fall 2019 in JOU 220, an introductory news writing course, that it all clicked for me. I remember the day as clear as ever; the whistle blower had come forward during Donald Trump’s presidency where he would be tried for impeachment for the first time months later. This was the topic of the class that day in which my professor said something along the lines of, “One of the roles of a journalist is to expose corrupt politicians,” and those were the exact words I needed to hear.

From that point forward, I began to read more and more political news coverage and started developing a passion for political reporting. I was mesmerized that journalists have the courage to report on political issues without the worry of what other people think.

The journalism program at NKU is so special; the professors could not be more talented and supportive. I took a leap of faith in Fall 2020 and took JOU 380: News Media Workshop where I was able to produce content for The Northerner. My first story was on voting registration where I talked to a professor and two students about their thoughts on voting and the importance it holds. The rest bloomed from there. I went from a reporter to news editor in the span of a few months and then took on the role of managing editor in Fall 2021.

I have gotten to experience so many amazing opportunties during my time with The Northerner that in the end made me a better journalist. I covered SGA meetings for two semesters, an SGA impeachment hearing and even hosted and moderated The Northerner’s annual SGA presidential debate in March of this year. I’ve been able to learn the process of government and how to cover pretty challenging stories with short turnaround times.

Most importantly, though, I have made so many connections and have had the chance to allow students’ voices to be heard throughout the NKU community which is truly the best part of journalism.

If you take anything from this, let it be that you don’t stop until you find your passion. I was silly to think putting a limit on the amount of times I could switch my major was acceptable, but, in the end, it worked for me. If you find something you thoroughly enjoy doing and are passionate about, work won’t really seem much like work.

I owe so many thanks to those who have helped me throughout my journey as a student and journalist.

Michele: Thank you for showing me that it is okay to not be perfect and that reflection is key for improvement. You have been such a great support system not only through my time at The Northerner but also in the classroom. Thank you for answering my sometimes frantic emails and giving me the reassurance that I very much needed at times. You have pushed me to be a better journalist each and every day and I cannot thank you enough for all that you have done for me.

Stacie: One of the most influential professors I have ever had the privilege of knowing, thank you for being so understanding and the professor that everyone needs. I learned so many valuable lessons throughout your classes and I know the knowledge I gained from them will stick with me forever.

Matthew: Thank you for being such a great leader and hard worker. Coming into these roles was challenging, but having you as Editor-in-Chief made the process go a lot smoother. Your passion for sports shows in your work and I am confident you will go on to do so many great things as you already have. It was great getting to work alongside you throughout the last year.

Rachel: If you’re reading this, thank you. My first friend from The Northerner, you welcomed me with open arms. Being co-news editor with you was something I will never forget; you are the entire reason I stuck with The Northerner in the first place. I hope one day we can finally meet each other in person because it’s crazy to think that the person who held the largest impact on the start of my journey is someone I have only met virtually.

Braden: You have grown so much since the first time I met you, not even a year ago, and now you will be transitioning into your position as Editor-in-Chief and I have no doubt that you will do great things for this publication. I am so thankful for the friendship that we now share and I cannot wait to see all of the work you do in the coming year. You are such a talented writer and I know The Northerner will be left in good hands with both you and Mildred.

Mildred: Your passion for journalism shows throughout all of the excellent and near-perfect work that you do. I’ve never met someone that can copy edit as well as you do. Being managing editor is a little scary at first, but I know you will do so many great things for The Northerner due to your devotedness and hard work. I look forward to reading your stories in the coming year and can’t wait to see all that you take on.

Brendan: I can’t believe I met you before the pandemic hit – it seems so long ago. From being in the classroom with you to the newsroom, I know you will be an asset wherever you go. I’ve enjoyed reading your stories and the passion you have for sports and showcasing others is something I look up to.

On to the next chapter. Thank you, NKU.