Fear of Missing Out: Rhydakiid’s statement of comfort outside the comfort zone 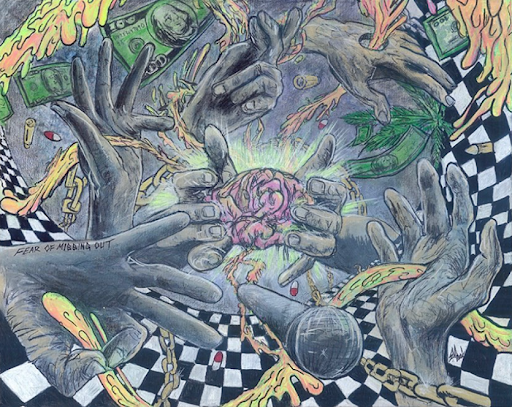 Rhydakiid was at a frat party at Florida State University when he conceived the idea for what would become his debut studio project. The chaos and indulgence of the scene was one a lot of young adults would love to experience, but it didn’t feel right at the moment.

“This is what some people view as everywhere I should be, but it’s like the last place I wanted to be,” Rhydakiid said.

Fear of Missing Out is an introduction to the consciousness and essence that Rhydakiid brings to the world through his music, which is one he hoped would serve as his foundation for further development and grab listeners’ attention.

FOMO hones a cohesive sound without becoming dull or redundant, packed top to bottom with carefully crafted production underlying Rhydakiid’s melodic cadences, sharp vocals and astute wordplay. It is a forceful statement by the 21-year-old rapper from Loveland, Ohio. At 10 songs and 25 minutes, the project is easily digestible for anyone, with a palette that includes substantive subject matter that will leave listeners curious and contemplative.

The tenor of the project relates to the concept of the title: being fearful of missing out, the fright of looking back on your life wondering, “what if?” The project is packed with ruminations of dealing with the pressures of the conventional world and the grips of self-doubt that so often feel like they are leading you down the wrong path. FOMO is Rhydakiid’s proclamation of capitalizing on his time and refusing to succumb to the qualms that steer people away from the unbeaten path.

When asked what FOMO means to him, he responded, “Always feeling like you need to be everywhere but where you’re at.”

Sharing a debut project founded upon vulnerability and authenticity distinguishes Rhydakiid from other artists in a saturated, formulaic industry.

“I wanted a platform to base myself on, why not start with something that I feel like is always one of my biggest flaws,” he said.

Vestiges of transparency and uncertainty imbue the project’s entirety and tie together a holistic theme, lending to a project that is equally provocative to decipher lyrically as it is entrancing sonically. The substance of the project is relatable to anyone who has ever experienced doubt and alienation. For Rhydakiid, these are the feelings that stir his ambition. Fear and doubt have a way of brewing regret if not confronted. To Rhydakiid, the prospect of leaving potential latent is more bleak than failure.

On the song “IDEK,” Rhydakiid contends with his conflicting feelings of isolation and eagerness–being on what feels like the cusp of a new juncture in life but not quite evading the surrounding skepticism that makes him second-guess his choices. Accompanied by a serene guitar riff and buoyant synths, it teeters the line between exuding ambition for himself and indifference for his skeptics.

FOMO was Rhydakiid’s first project since 2020. The creation process was fluid to accord with his pace of life during the span of its creation. It is clear that willingness to learn and resilience were necessary throughout the creation process, as he juggled the volatility of life as a young adult in an unparalleled era while competing to amplify his voice in a competitive industry. These factors led to a project rich in insight and personable material that are reflective of an earnest person in a very real situation.

“I’m very indecisive as a person, but as an artist, there is no right way to go about it,”  Rhydakiid’s said.

While working on the project, life hurled many adversities and learning experiences his way, but Rhydakiid believes the journey of life is not one to be predicted or premeditated. This mindset endowed him the freedom to be comfortable taking chances and dealing with the results in stride.

On the song “WALK2MOONS,” Rhydakiid contemplates the unpredictability of life that he has learned to be inevitable. Over a dreamy guitar riff, he affirms that regardless of how his life unfolds, he is hopeful that it will lead him precisely to where he needs to be. All he can do is put his best foot forward everyday, striving to improve as a person and inching closer to his aspirations.

“I do have a story I want to be told and when I get to where I want to go it will be a beautiful story to tell,” Rhydakiid said.

This sense of contentment with the present moment and composure about where his decisions will lead him was not effortless for Rhydakiid while he worked on the project. Throughout the creation process, he found himself so eager to breakthrough with his music that he often felt he should have already been flourishing, as if his unstable, nascent position in life made him uneasy about how things may eventually manifest. He had to temper his passion and expectations to realize he had everything he needed at his disposal.

The final product immensely benefited from him becoming grounded and patient in every moment, which eventually culminated into a project composed of a stylistically cohesive and unique sound representative of himself. Rhydakiid said the initial release date was set for November 2021, but had he released that version of the project, four of the album’s 10 songs would have not been included.

“Timing. Letting something build and not rushing the process was the takeaway of all those songs being on the same project,” Rhydakiid’s said.

FOMO is a reflection of a turbulent but enriching period of his life. It interprets everything that was going on around him and influenced his outlook and values–losing close friends, trying to gain footing on his journey, enduring the unprecedented times spurred by COVID-19. At times he wanted to rush the process and questioned if he was playing his cards correctly. Pressed by the fear that his time would slip if he didn’t make the right moves, he had to remind himself of what he wanted to accomplish with the project.

On “PSYCH FACTOR,” one of the project’s most cerebral and rousing tracks, Rhydakiid confronts some of the adversities that could derail his course in a moment of lapse. The song was inspired by the death of two of his friends by overdose. He was encompassed by temptation and distraction, with looming death reminding him of the shortage of time he has. The song includes a woozy vocal loop that intensifies the grim aura of the track. His wistful, solemn flow gradually boils to a sonic breakthrough where his longing and distress morphs into a convicted assertion of necessary action, creating a moment analogous to overcoming a plunge.

The project’s gritiest song, “EGODEATH,” a display of Rhydakiid experiencing the humbling vulnerability that comes with taking risks, is accompanied by a dense landscape of punchy and colorful guitar riffs. Rapping with zeal, he reasons the only remedy to these qualms is to remain unwavering, trying to deflect any internal or external negativity while following his intuition purposefully and unremorsefully.

Becoming comfortable with the facts and objectives of his situation allowed him to build a circle of key, like-minded people to help him build the foundation he envisioned FOMO to be. The talented and dedicated people Rhydakiid surrounded himself with played a central role in the gradual development of this project that he said was lacking on previous projects.

“On FOMO, I was working in a real studio with real engineers and real people wanting to hear my best work,” Rhydakiid’s  said.

The project’s only features are occupied by singer and rapper Pangeaux on the tracks “2025” and “WILD THINGS.”

When discussing “2025,” Rhydakiid said that the song was produced out of a studio session where the atmosphere was synergetic and everything felt to be in equilibrium. He said he had a premonition that everyone involved in the session was going to continue making music at a high level in the future, inspiring the theme of the track that forecasts a promising fate. The tone of the track is chilling, with a haunting instrumental featuring a subtle, ghostly vocal loop that suspends the track in an ethereal space.

Adding to the divine aura of the track, Rhydakiid shared that in the span of days when he was working on the song, the number “555,” kept recurring in his perception; the number 555 is thought to symbolize imminent change.

Rhydakiid is confident that if he continues doing good in the world and working towards his vision for himself, the changes he envisions for himself will fall in place.

“I know what I’m here for, and until that day comes I’m going to do what I can to be better at that and inspire other people to be better at what they do, ” Rhydakiid’s said.

Rhydakiid knows a breakthrough can happen at any moment if he doesn’t falter. He has seen artists come up around him, affirming that his grit can pay off. He is used to being overlooked and doubted, acknowledging that he has felt like a dark horse his entire life, but he stays true to himself.

“We’re all the main characters in our own lives. Nobody is better than the next person, we’re all just sondering. Why wouldn’t I do what I genuinely enjoy?” Rhydakiid considered. “If things are still scaring you bro and making you uneasy or this and that, do it.”

FOMO is the microcosm of a young artist finding the balance between constantly racing the clock and meticulously calculating his moves to arrive at the best result, something that anyone that has stepped out of their comfort zone to strive for something bigger than themself can relate with. When people used to ask him if he had a back-up plan aside from music, he would answer that if he hadn’t solidified stability in music by age 21, he would move on.

“But now at 21 I have the most fuel I’ve ever had and the most eagerness and willingness to learn,” Rhydakiid said. “I feel like I’m just getting started.”

Rhydakiid is no stranger to being counted out. He has weathered his fair share of hardships, but they only taught him to be more confident betting on himself. He sees letting discomfort and apprehension dictate his actions as an inhibition of potential and growth. There is no ceiling to his manner of existence and that is what propels him. To him, it would be nonsensical to stop hustling when he knows the value of what he is doing and where it could take him. Getting the world to see the value he presents in the same light he does has proven to be an invigorating and humbling experience for him, but with FOMO, he has successfully laid the groundwork for that value to be spectated as it abounds.