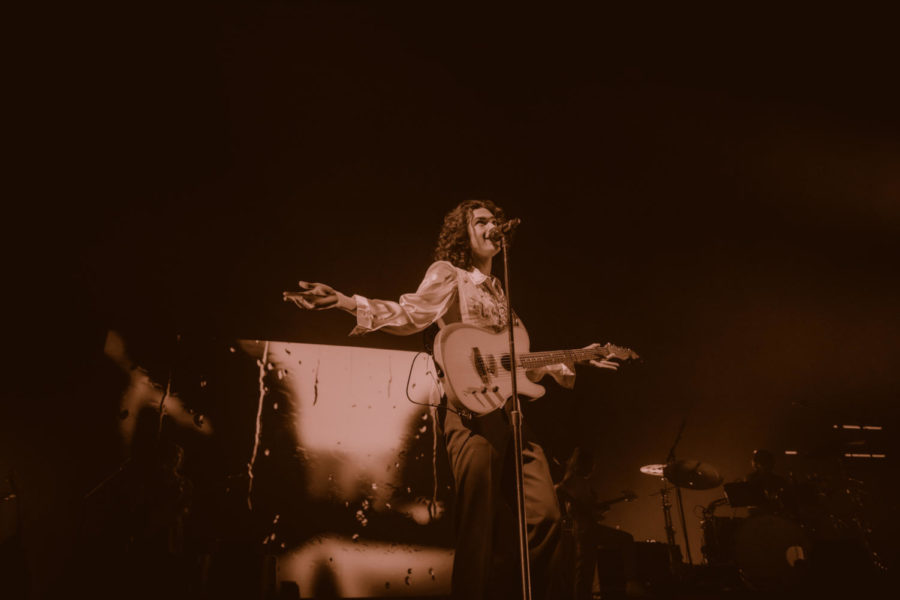 Conan Gray has taken the world by storm since he started his successful YouTube channel in 2013. Eventually, he found a more than dedicated fanbase and began his music career with his first song “Idle Town.” In March 2020, he released his first album “Kid Krow,” and became more of an internet sensation as he trended on apps such as TikTok and Instagram.

On March 23, 2022, Conan Gray took center stage at The Andrew Brady Icon Center in Cincinnati for his North American Tour, along with his opening act Bülow.

Having a big fanbase has helped Conan to develop a very wide platform that includes Northern Kentucky University students.

Jaycie Bussell, an NKU freshman majoring in Electronic and Electrical Engineering, says that she’s been a fan of Conan for around 3 or 4 years, and that she started following him on social media when she was just beginning high school.

“I thought the show was amazing. I loved how he spoke about how he wrote the songs and where he drew inspiration from. He was also very engaged with the crowd, and you could tell he really loved what he was doing and how he wanted to help others going through tough times.” Bussell said.

The night kicked off with screams of appreciation as Bülow came on the stage and began singing her latest song “Don’t Break His Heart.” Though this song was released very recently, like most of the songs played, the fans kept up with the lyrics well and danced along to the rhythm.

Wrapping up with more popular and well known songs of hers such as “Get Stüpid” and “You & Jennifer,” Bülow made sure that the crowd was more than ready for the infamous Conan Gray to take center stage.

The tension built up as Conan was getting ready to take the stage after a brief intermission where the fans were screaming the lyrics of songs being played over the speakers. These songs included “Still Into You” by Paramore, “Heathens” by Twenty One Pilots, and “Cruel Summer” by Taylor Swift.

As the music and lights died down, chants of “Conan, Conan, Conan” could be heard all throughout the room. Conan Gray appeared on a raised platform above the actual stage to begin his set with “Wish You Were Sober.” The crowd was ecstatic and sang along with every word.

However, Conan’s voice did not seem the same to the fans. They later found out that he was sick, and did not “just wake up.”

As more of the show went on it was apparent that this fanbase was very close to the artist and where he stood on his values because pride flags were hung over the bars of the top section and friends were surrounded with hugs when sad songs were sung.

When Conan did have a break to talk to his fans, things such as how he wrote his songs in his bedroom and what in his past truly inspired them were mentioned. This was an amazing bonding experience that the fans would not have truly experienced otherwise.

The show had a bittersweet ending with his last song, “Heather,” being his saddest yet most popular.

Many fans of Gray left the show with great memories to last them a lifetime.