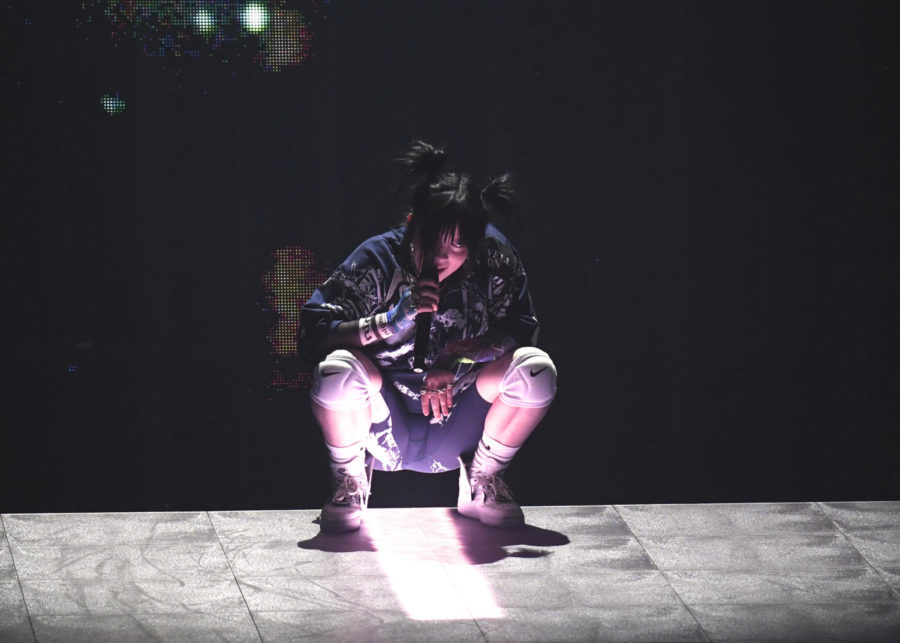 Gallery|8 Photos
Provided (High Rise Media)
Eilish crouches down to sing to the fans at the Yum! Center.

Last Friday, March 11, Billie Eilish’s Happier Than Ever World Tour appeared at KFC Yum! Center in Louisville, KY. Billie is currently on her sold out worldwide tour with Louisville as stop 17 of 54 shows throughout the spring, and she did not disappoint.

The night started off with an incredible opening performance by DUCKWRTH, a rapper and songwriter from Los Angeles. The lead singer, Jared Lee, and his incredible band performed a 40-minute set with a mixture of some released and unreleased songs. His charming personality and rhythm had everyone grooving to the music and ready for Eilish to take the stage.

Then came time for Eilish to perform and the crowd went wild, chanting her name until the lights dimmed when her song “Bury a Friend” started to play. A minute into this song, Billie was still nowhere to be found. A couple more seconds passed and she lept into the air right out of the stage. Fans went wild and her grand entrance had the whole crowd up on their feet at this point and singing along with her as she greeted the audience.

Brother and guitarist Finneas O’Connell and drummer Andrew Marshall accompanied her on stage as she quickly started transitioning to songs from her new album, “Happier Than Ever”. Billie’s incredible stage presence and ability to connect with her audience was impressive. I have been to a lot of concerts in my life, and I don’t think I’ve ever seen an audience with more passion and enthusiasm for an artist. She was able to make a crowd of over 22,000 feel more welcomed and loved than I’ve ever seen. She was constantly checking in on fans throughout the show and reminding people in the pit to take steps back in order to keep everyone safe.

About halfway through the show, Billie ran off stage and a few moments later appeared on the B stage towards the back of the arena.  This small t-shaped stage not only served as a another place to sing from, but also dueled as a crane that lifted her high above the crowd as she sang her hit songs “Ocean Eyes” and “Bellyache” from her first album, “Don’t Smile at Me”.

While in the air, fans turned on their flashlights and had the whole arena glowing and swaying back and forth. This sweet moment she shared with her fans progressed into something that  moments later was more humorous when she had the entire arena do the wave along with her.

Eilish returned to the main stage to perform her last few songs. During “Getting Older,” the opening track of “Happier Than Ever,”  visuals of her as a child flashed on the screens behind the band.  Videos and photos of her family and early moments of her career were on rotation as she sang a song about growing up and experiencing fame from a young age. She made what is a slightly dark song into another sweet moment for her fans to connect with.

Eilish closed her close to two-hour performance with a jaw dropping performance of her title track “Happier Than Ever.” Midway through the song, confetti shot out of the ceiling making fans reach for the sky in order to have a token to remember the show by.

Eilish said her bittersweet goodbye to her fans as the song ended, but that was not the end of the show. She ran to the top of the ramp where O’Connell and Marshall were and all slid down the ramp together followed by a big bow. This tradition has been something fun they have been doing all tour and it made for a wonderful finale.

This was when the fans had to say goodbye. A wave of sadness swept the arena as the house lights started to turn on and her crew started to pack up. However, there was also an incredible sense of happiness amongst the crowd that had just seen their favorite artist perform. Leaving a show is always a bittersweet moment but you take away so many memories, and this show was proof.

This was my first time, but definitely not my last time,  getting to see Billie Eilish live. She completely blew me away with her performance and ability to connect to her fans. Being only 19, I can only imagine what she has in store for the future. I feel so grateful to have scored tickets to a sold-out show in my hometown. Until next time Billie!