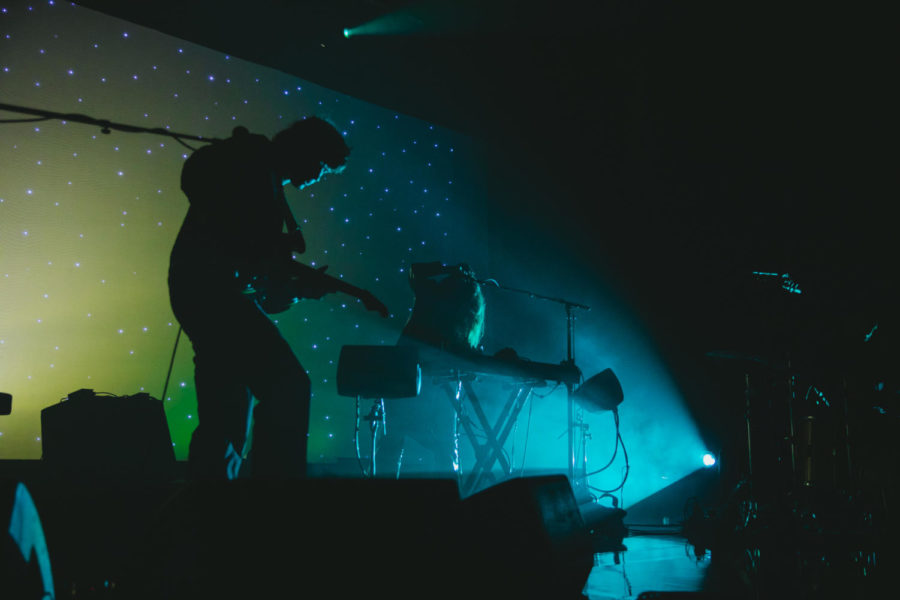 Gallery|7 Photos
Zayne Isom
Beach House's colorful lightshow throughout the concert had fans in a trance.

On Wednesday evening, Beach House, an alternative/indie duo from Baltimore, Maryland, stopped to perform their 10th show on their Once Twice Melody Tour at PromoWest Pavilion at Ovation.

Beach House has been a popular alternative/indie music duo since they were formed in 2004 with songs such as “Space Song,” “Over and Over,” and “Illusion of Forever.” The band consists of Victoria Legrand as vocalist and keyboardist and Alex Scally as a guitarist, keyboardist, and backup vocalist. What is really interesting about this band is that their song “Space Song,” was incredibly popular on TikTok for months. This helped them gain more fans, including Northern Kentucky University students.

Julia Pohl is a freshman at NKU that attended the concert at OVATION on Wednesday.

“For my first concert, I tried to go in very open-minded. Although the ban had very chill, low-beat vibes, the lights really made it exciting. I had a really amazing time,” Pohl said. “I wasn’t very familiar with the band Beach House, but leading up to the concert, I really tried to get familiar with the band. I’m so glad I did because It made the concert even more enjoyable. I was able to recognize and get excited when a song started.”

Going into the show many fans were expecting it to be a laid-back show. However, Beach House is known for its dazzling performance no matter the location or size of the venue. Opening with songs from their most recent album, Once Twice Melody, the band came out and got the fans adrenaline high for what was to come.

As more songs were played, Beach House made conversation with the audience in between so that the audience had a chance to engage with the band. Things like COVID-19, quarantine and being able to perform on stage with a live audience were mentioned. Legrand discussed how she sometimes gets so lost in the performance of art while on stage and it is the audience that helps her focus.

When the lights went down and Beach House closed with their song “Lemon Glow,” the fans were sad to see them go. After an exhilarating performance, Beach House had left the fans stunned and wanting more. The band did not want to disappoint, so they did an encore with the song “Over and Over.” This made fans, Pohl, have a night that they are not soon to forget.

After the show was over Kennedy Kitchen, another NKU freshman, stated that her overall favorite part of the show was “the environment that the lights and the crowd made.”

Though they just hit number one on Billboard’s Top Album Sales chart, it is rumored that Beach House has been in the studio with Kanye West and that they are planning on releasing a single. This won’t be the last time we see Beach House at Ovation.

PromoWest Pavilion at Ovation is a venue near NKU where students can go to witness some amazing artists. Several up-and-coming artists such as The Wombats and Umphrey’s McGee have performed at this venue, and there continues to be a wide array of genres every month.