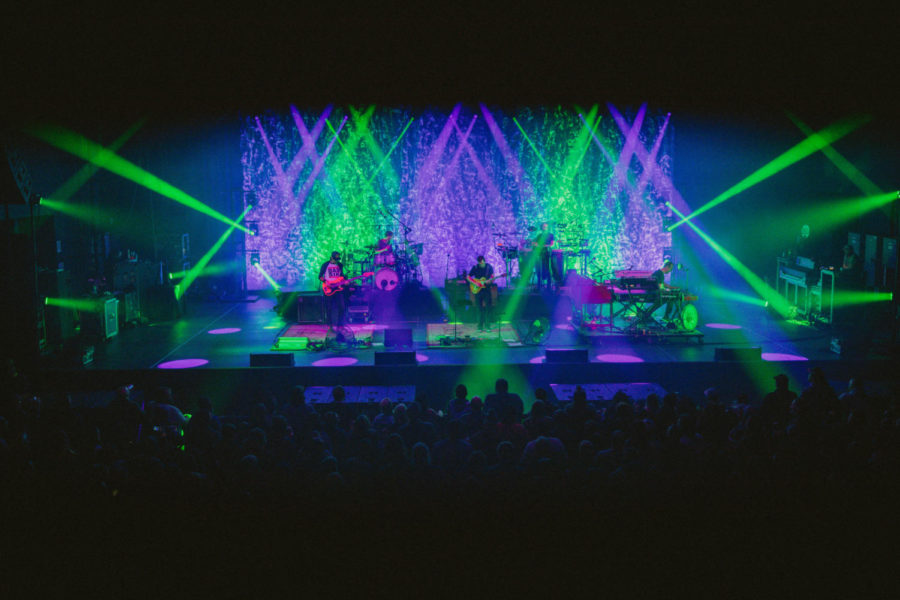 There’s a new music venue in Northern Kentucky and every college student that enjoys music should visit.

Umphrey’s McGee took the stage at PromoWest Pavilion at OVATION on Thursday night. This lively and energetic show kicked off the first of many at the venue this season. Other notable upcoming performers include the Wombats on Jan. 29, Russel Dickerson on Feb. 5, and The War on Drugs on Feb. 6.

Fans piled in the venue right at 7 p.m. when the doors were opened to escape the cold temperatures. The merch line quickly filled up as fans entered to get one of the band’s collectible tour posters and souvenir shirts.

The crowd was a mix of older men and women, teenagers, and young couples. Some were super fans and for some it was their first show. One young lady wore an all pink furry jumpsuit and her face was covered in blue rhinestones. She stated that it was her fifth show at OVATION. This electric crowd led to a wonderful show of fun dancing and headbanging.

OVATION is Newport’s newest and largest music venue that doubles as both an indoor and outdoor venue. With it being less than a year old, there have not been very many shows held there, but they are taking over the music scene in 2022 with their jam-packed lineup.

Walking around the venue, it was enjoyable to see everyone dance to the beat of the music and soak up the moment they were in. This show certainly opened the eyes of everyone who hadn’t heard Umphrey’s McGee to a newfound appreciation for jam bands. A fan stated that this is a mix of long improvisational tunes (the free performance of a musical act) mixed with various covers and is the genre the band is labeled as.

This might not be some people’s go-to genre, but anyone can find appreciation for the spontaneity and suspense of improv throughout the show.

The upcoming concerts at OVATION would be great opportunities for students to have a break from studying and to have fun. One of the most important things as a college student is branching out, and there are plenty of people at these shows willing to talk to NKU students. Students can also connect with the venue and surrounding companies for internships because these businesses are always looking for any kind of help they can get.

If you are interested in learning about future shows at OVATION, make sure to check out their website or follow them on social media @ovationpavilion to stay up to date on events. It is only a 12-minute drive from campus with plenty of free street parking.