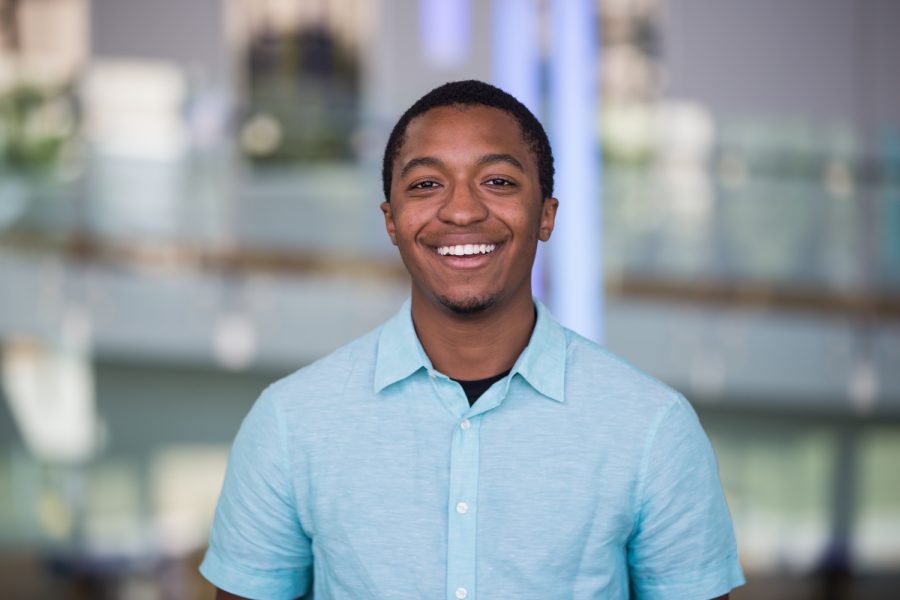 I stumbled into The Northerner’s meeting by a matter of being pushed by none other than Natalie. After spending weeks that turned into months in the same classes she and I were waiting in the lobby of Griffin Hall, extremely distanced, for the meeting doors to open.

Intimated, I still sat and listened. I took part in my first section. I developed a rapport with then-Arts & Life Editor Cole Grecco and took up a story. My first assignment was the Black Women’s Organization Fashion Show.

Meeting the women in charge, they exclaimed how they were thankful that people were covering the event. That conversation was something that stuck with me, to the point where I wanted to see how that could be emulated consistently—especially within the Black community.

I moved through the ranks and tried to ensure our coverage was the best it could when it came to Black people and one of the best moments was finally pulling Sierra into the office.

As time passed, The Northerner became more of a home and positions began to fill. We made playlists to pass the time and add white noise to the day, had family dinners during production nights—often over Chipotle—went out as a group and produced numerous experiences that I’ll forever be thankful for.

Alas, this was all pre-COVID-19. My final year and a half of The Northerner hasn’t been the same for numerous reasons and saying goodbye on these terms is not even slightly satisfying. The final physical moments I had with many of the people here was a year ago and many words were left unspoken.

Allie, Cameron, Matthew, Madison, Kaycee, Tareza – Thank you for jumping on the team in a moment when we needed you most. You six, extremely talented in different ways, have each shown me a work ethic that I am going to take with me. I wish for a year without COVID so we could’ve been together without the distance and calls.

Sean – Although at first we argued about who would write the album review for IGOR and I apprehensively let you have it, I am thankful for you and your humorous presence in the newsroom and over Zoom calls. I hope I get a Switch in the coming months so we can keep in touch that way.

Alyssa – You’ve shown passion for journalism and drive that I love. You’ve shown a want for people to fit in that I wish I could possess, growing alongside you in college has been grand and I wish you the best.

Rachel – When I learned you were from my rival high school, I was hesitant. However, you’ve shown tremendous amounts of growth, work and proven to be a force inside and outside the newsroom. Thank you for teaching me a lot about myself and hopefully we’re in Owensboro together for a bit and can get lunch at Great Harvest or something.

Abby – One of our brightest stars. Thank you for your time and giving me something to laugh at every time we were in the newsroom. You are resilient, fierce and one of the strongest forces I’ve ever met, plus you give me hope that one day boy bands, 2016 humor and trends will one day return. You’re going to do amazing things.

Natalie – I do not know what my NKU experience would be without you next to me during quite literally every experience. From Nice Natalie in orientation classrooms to late nights in the newsroom playing music and hiding from building “employees” to phone calls across the county, state, nation and globe, you are my most integral memory of NKU. You are one of the best souls I’ve ever met and I know a forever friend. It’s a relationship only we understand and I am grateful no one else understands our trust the way we do. Thank you for you.

For those before me:

Sierra – My older sister and constant prayer warrior, I thank you for consistently pushing me and giving me space to fail and grow alongside each other. I have no words for what you’ve done in my life and my sanity. Being together in this 14,000-person bubble the way we have and understanding each other the way we do has saved me from making numerous decisions I’ll end up regretting and forged a relationship I will never regret.

Kane – By us finally getting out of each other’s way, you’ve become a mainstay in my life. Thank you for picking up where I slacked often and also allowing the balance of work and play. Conversations about Pierre and driving to stores provided a base for a friend that I know I will be able to keep forever.

Sam – As a role model, you were amazing. I didn’t understand it at the time, due to adolescence and my stark need to question authority, but you truly showed how to lead effectively while also maintaining yourself authentically. I’m still sorry for pranking you and your playlist those years ago, hopefully when I return we can get a drink at Mac’s and I can help you reassemble it.

Mack, Jude, Cole – Without your support I would not have stayed. Whether you told me personally or I heard candid comments indirectly, the way you would champion me pushed me to stay. I appreciate you and what you are all doing now. Thank you for laying the foundation of my college experience.

To everyone here on campus, especially my Black and students of color – Thank you for the space. Push on. Be the change. Continue to fight for the rights and comfort of the student next to you.