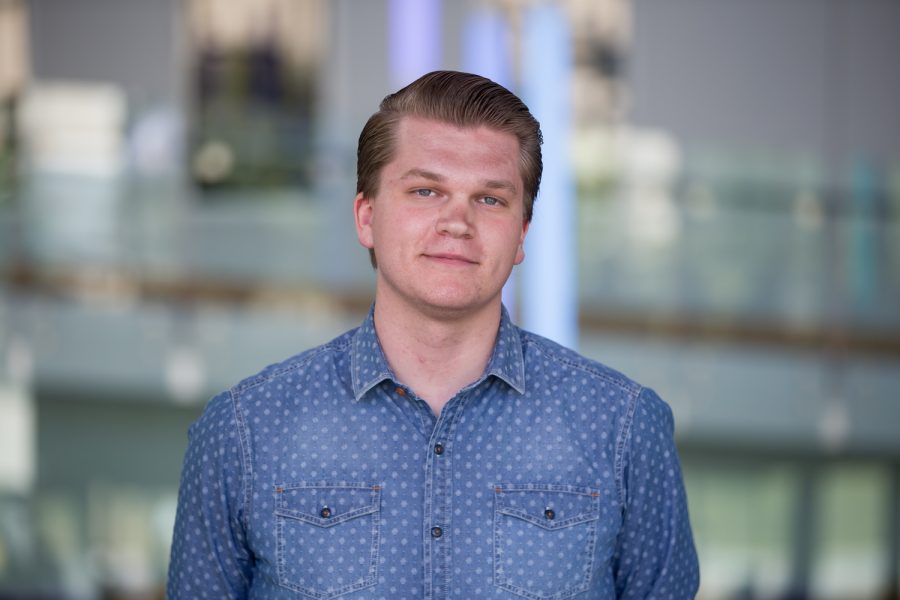 My first two years at NKU were kind of a mess. I changed majors and minors, made friends, lost friends and began to develop a sense of what I wanted in not only my career but in my life overall. I never imagined that now, four years later, I would be where I am today.

I have always been an avid newsreader. I started using RSS feeds in middle school, began listening to podcasts in high school and by college I was subscribing to major news outlets. I was aware of The Northerner my first day on campus, and I even remember picking up my first issue (Ed. 58 Is. 2) the second week of school in Fall 2016.

After picking up my first issue of The Northerner, I remember it changing my perception of how I could go from simply a new consumer to a journalist. I gave it some thought, and by my second semester, I changed my major from computer science to a double major in journalism and electronic media and broadcasting. I was all in on journalism.

However, it wasn’t until the second semester of my junior year that I found myself in The Northerner newsroom. By then, I was still a journalism major sans EMB, with a new minor in cinema studies. I was still set on news from purely a writing stance.

I never planned on walking into the newsroom by my own conviction. When meeting large groups of new people, the social anxiety of my youth of embarrassing myself amongst my peers slowly begins to seep back in. So like any millennial who doesn’t want to confront their fears, I simply avoided it.

It wasn’t until about a month into the winter semester of my junior year that then-Assistant Arts & Life Editor, teacher’s pet and walking cultural zeitgeist encyclopedia Kane Mitten approached me when I was sitting outside the newsroom waiting for my class to start across the hall. With absolutely no regard for my time of rest (drinking a coffee and scrolling through Twitter to pass the time), Kane urged me to go into the newsroom and socialize.

I was appalled. Who was this little man to tell me to connect with my colleagues and contribute to the student newspaper? I insisted that I was not qualified and haven’t written anything for them. He didn’t care. That day, his sole mission was to get me in that newsroom. Alas, when I am put on the spot, I choke and go against my better judgment.

Nevertheless, in the most appreciative form of hindsight, I could have never have asked for a better encounter with a (then to me) stranger. Kane making it his prerogative for me to become a contributor for The Northerner was one of the best things to happen in my life—and I truly will never be able to thank him enough.

Within a couple of days from my awkward first day in the newsroom, I was writing my first story (a review for “They Shall Not Grow Old”) and becoming fast friends with everyone in the newsroom. Then-assistant news editor Josh Goad and I talked about video games and tech, then-editor-in-chief Sam Rosenstiel and I talked about news and music, and Kane was blowing up my phone where we would talk about anything from movies to menswear.

Almost immediately, I became inseparable from the newsroom and was addicted to helping out in whatever way I could. Within a month, I went from a contributor to being sworn in as copy editor by Sam. After the end of the semester, I was made a news editor by the next editor-in-chief Natalie Hamren.

Overtime, I gradually realized I was meeting my new best friends for life.

Kane, who I begrudgingly followed into the newsroom at his behest, is now an irreplaceable lifelong friend who I could never imagine going more than 24 hours without talking to.

Sam, quite possibly the funniest person I’ve ever met with the humility that anyone would dream of in a friend (and the music taste to match any mood).

Super Sports Editor Emeritus Sierra Newton is the hardest worker that anyone will ever meet and will most likely become president or Ariana Grande’s chief of staff.

Josh Kelly charms quite like no one else I know by always relating the topic at hand to either Big Brother or the most obscure reference imaginable.

Natalie, someone I never thought would become such an important part of my life and is the only person I know that shares my same love for animals, nature and traveling.

Looking back, almost two years later after first entering the newsroom, now as the photo editor and design editor, I can’t imagine my life any differently. It is still hard to say what I will do after I graduate—if bouncing around from news, photo and design says anything. But one thing I know for sure is that The Northerner will forever be an integral part of my life that I can’t imagine what I would be doing without it.