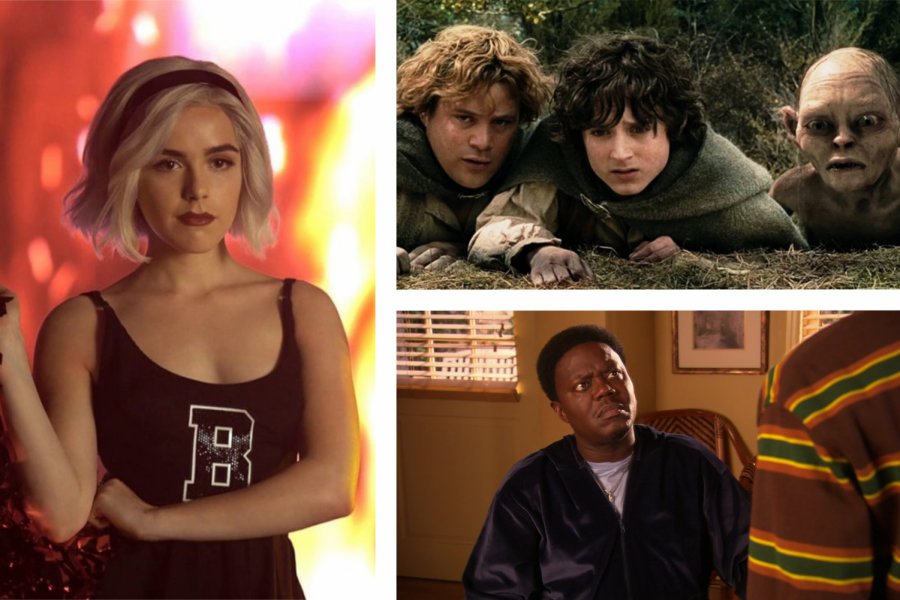 (Left) Chilling Adventures of Sabrina on Netflix, (Top) The Lord of the Rings on Hulu, (Bottom) The Bernie Mac Show on Prime Video

The Adam Sandler and Drew Barrymore romantic comedy that you want to relive 50 times over is finally hitting Netflix and Hulu on Dec. 1. The film focuses on Sandler as he falls in love with Barrymore’s character who is diagnosed with anterograde amnesia after a car wreck. Because of her amnesia, every day she lives is a repeat of the day before the crash as her brain cannot form and retain any new information. Knowing this, Sandler continues to try to give her the best first date, 50 times.

Ready to get into the holiday season? The third season of the Netflix Original brings back four former competitors to face off for the title of Yuletide winner. Some of the competitors are full of sweet sugary bakes like cake and cookies but what’s Christmas without a gingerbread house? After finishing this holiday special, you can watch the year-round version as it just finished it’s release on Netflix on Nov. 22.

Sabrina embarks on her last adventure in the Netflix Original. The trailer reveals this season takes place around Sabrina’s 16 birthday and is packed with unforeseen perils and even a tentacled monster. Dropping on New Year’s Eve gives you the perfect opportunity to ring in the end of your 2020 with the monsters we were lucky not to face.

The Lord of the Rings Trilogy makes its return to streaming, but not for long. In 2020, the first two movies experienced removal and addition to Netflix numerous times. Now, the trilogy will be on Hulu but only for the month of December. Be sure to watch and watch and watch, because if the future of this series is to look as checkered as the past year has, who knows when we’ll see the films again.

When you were a kid you likely read about Nancy Drew, well what about the Hardy Boys? The detective brothers are brought from page to screen as they take their investigative skills to Bridgeport. After being in Bridgeport for a family emergency, they see the town has secrets to hide, mainly their parent’s new investigation. Embark with the boys and their new friends as they learn what’s really happening in Bridgeport.

One man’s toxic sludge is another man’s potpourri in the Musical of the famed Dr. Suess story. A sneak during the Thanksgiving Day Parade this past week revealed “Glee” alum Matthew Morrison (yes, Mr. Schue) as Mr. Grinch. Alongside Morrison are “Twilight” and “Descendants” star Booboo Stewart, “American Horror Story” star Denis O’Hare, “Lost Girls” star Amelia Minto and others. The show will be broadcast from Troubadour Theatre in London on Dec 9, but following the broadcast will hit the streaming service on Dec 10.

What do you want for Christmas? Cake? Cookies? Sweetbread? What about meatballs? Well with Flint Lockwood’s FLDSMDFR, just a bit of water can turn it into any tasty food you want. The 2009 animated film centers around small town Lockwood, voiced by Bill Hader, as he dreams and invents the best inventions he can. The goofy children’s movie is rated by Rotten Tomatoes with 86% putting it in the top 3 of Sony’s animated films only trailing “Arthur Christmas” and “Into the Spider-verse.”

Loosely based on his stand-up acts, Bernie Mac showcases the fabled tales of his stand up with three kids, none of his own. The show is helmed as an essential in Black sitcoms winning an Emmy and a few NAACP Image Awards. The show used comedy and the fourth-wall-breaking to force a relationship between Mac and the viewing audience at times to normalize struggles and break stereotypes of the Black community in the eyes of the viewing audience. Something that can be seen in current shows like “Black-ish.”