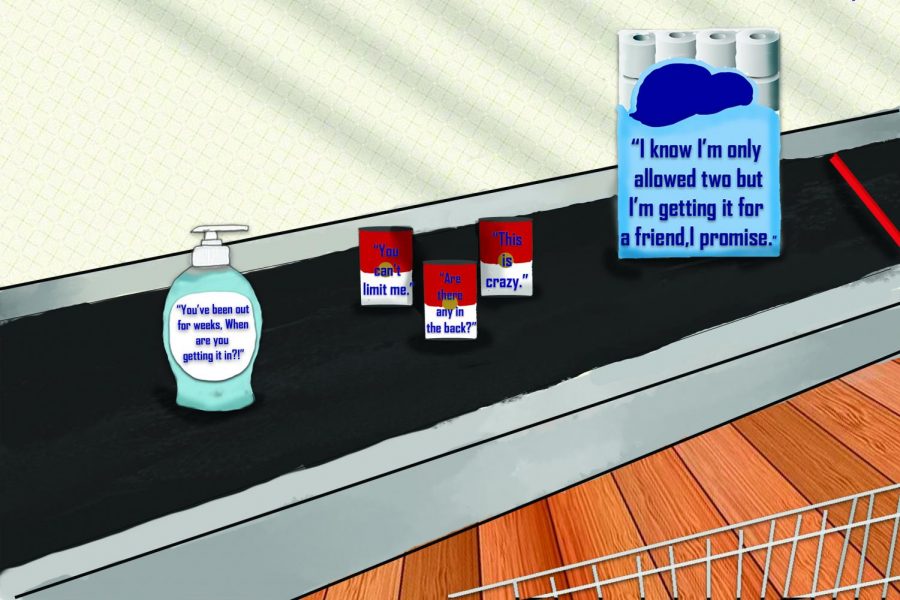 Many people still have to work despite the pandemic.

For many essential workers, risking our health is not a choice

Sunday was the busiest day of the week for grocery stores. I was on my way to my part-time job as a cashier where I live in Ohio. Leading up to this point, I remember that things were tense and confusion and uncertainty about the COVID-19 pandemic was impacting both customers and employees.

The store I work at had just recently started to enforce limits on essential items like sanitizing products, paper products, diapers and formula as well as food like water, eggs, bread and milk. This change was met with a lot of resistance from customers and it was starting to take a toll on employees (with a lot of my coworkers, including me occasionally, just deciding it wasn’t worth the fight).

Before I walked into work to clock in, I looked at my phone and saw that Ohio Governor Mike Dewine ordered a “stay at home” directive signed by the director of the Ohio Department of Health, Dr. Amy Acton. The order would not take place until 11:59 p.m. the following day, but that did not stop the panic.

Every time someone would come through my line with more items than the amount limit, I would get a little nervous.

There were times when I genuinely felt for the customers. They would claim it for their grandparents or another family member who couldn’t leave their house as they were at risk.

Most of the time, I would just allow these people to get double what they were allowed because it wasn’t worth the fight. Also, being an overly empathetic person, I had a hard time saying no.

There were plenty of people who understood why these limits were put in place and would hand over the items, albeit reluctantly but still compliant.

Unfortunately, there were also customers who were just downright terrible, claiming that there were no signs warning them of those limits (even though they were posted in every section of the store where limited items were). Some pointed out that I couldn’t stop them if they just did it in a separate order or had a friend buy it.

The worst moment of the night happened a couple of hours before my shift was over. I was mentally exhausted from having to tell customers over and over again that these limits were in place for the fairness of all customers. I had to remind them that I did not put those limits in place; I was just following my company’s guidelines.

When a young couple came to my line and started to put their items on the belt, my chest immediately tightened. The couple had over 10 packs of diapers in their order. After confirming with my manager that customers could only purchase two packs at a time, I told the couple they could not purchase the amount they desired.

The couple stopped dead in their tracks, becoming visibly angry. They started whispering loudly to each other about me, saying that there was no way I could limit them and they would do multiple separate orders if they had to.

At this point, I was frustrated and tired of arguing with people. Things eventually escalated to the point that my manager contacted the store manager who said to allow the couple to purchase the entire amount.

I informed the couple that they would be allowed to get all the diapers, but they were already too upset to care. After accusing my manager and me of whispering about them, they began yelling at both of us .

The couple said it was our job to bag their groceries and not ask questions. They said they had five kids and it was unfair for us to tell them they couldn’t get diapers for them (after we allowed them to get them). They said people like us with lower-end jobs should just do what customers want and that we were disrespectful. They said it was not their fault stores did not have enough diapers and we need to fix it.

I could feel my body begin to shake; my face flushing bright red with anger and frustration. I told them that it had been a really long day and that we are all trying to navigate this new normal. I was just following what I had been told. Eventually, things ended with the store manager being involved, the woman telling my manager that she could beat our a*s and her ripping the receipt out of my hands as I walked away with hot angry tears in my face.

This was not the first time I had been yelled at by a customer, but it was the culmination of all the frustration I had been feeling. I was putting myself (and my family at home) at risk by coming to work—a risk that was not even for a living wage.

Essential workers are also trying to navigate this pandemic themselves. We are also scared and uncertain about what is to come. While some companies have been giving bonuses, reduced hours and higher hourly pay, money can only ease your worries so much.

I will never forget what happened after I came back from my somewhat embarrassing crying session in the bathroom. A mother and her son came up to me to say they had witnessed the whole incident. The mother said she was so sorry I had been put through that.

“We just wanted to say that we appreciate you being here. We saw what happened and that was totally uncalled for,” the mother said to me.

I recognize that I am not doing groundbreaking work like the healthcare professionals out there who are literally putting their lives on the line. Sometimes I feel like I don’t deserve someone’s appreciation for doing what I am simply paid to do—a part-time position at that. But I can’t ignore how nice it is to be told you are appreciated and, more importantly, feel appreciated.

For many of us, putting ourselves at risk by coming to work is not a choice but leaving your house and not being safe when you do is. You can make many of us feel safe by simply following your state’s guidelines and only leaving when you truly need to.