The newsroom will miss our favorite "what's up?" editor 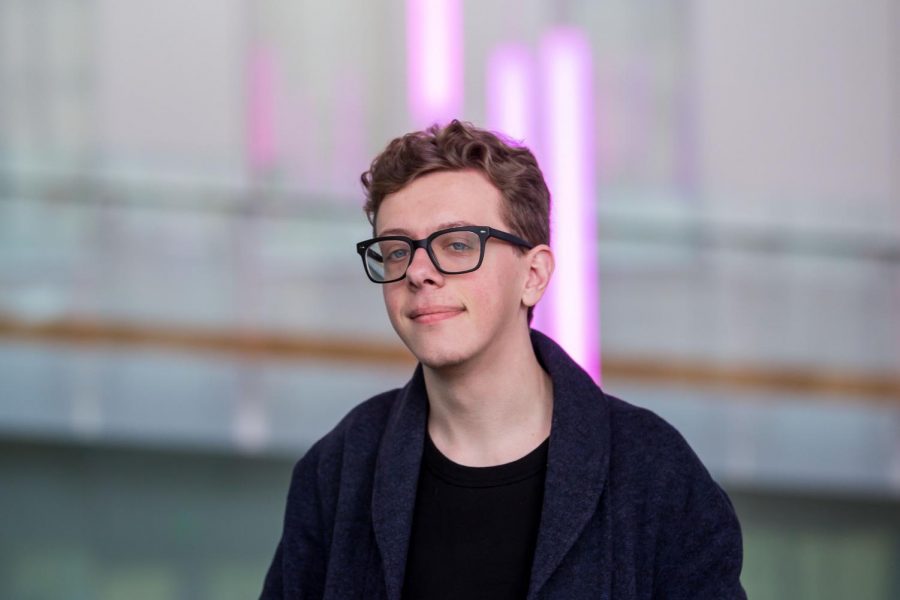 The Northerner saved my life.

I don’t mean this as some kind of joke or exaggerated statement. I came to The Northerner at my lowest point in life after some personal trauma I wouldn’t wish on anyone. The Northerner re-energized me. It gave me a purpose. It helped me find what I’m passionate about. It gave me some incredible and unique experiences that I wouldn’t have gotten anywhere else. Most importantly, it connected me with the first people that I’ve ever felt truly cared about me.

When I think about my time here, I’m overcome by a whirlwind of emotions and memories.

I remember the first time Natalie Hamren invited me down to the newsroom, where we talked about our many similarities and laughed for hours.

I remember a few weeks later when I walked in and got my first assignment when former editor-in-chief Sam Rosenstiel told me someone dropped out of interviewing Netflix star Karamo Brown, gave the job to me, and said “oh, by the way, write a lot because it’ll be in the center spread.” (I also remember feelings of nervousness and dread scarier than any horror movie immediately washing over me after he said that.) Of course, I went on to do a number of stories after that one, but I’ll never forget how Sam’s faith in me that first time gave me the confidence I needed.

I remember being afraid to go to any Northerner meetings at all, until my friend Jude Noel and my favorite professor Dean Hume convinced me that I was good enough. I’m immensely grateful that they pushed a nervous, scared kid who was, frankly, going nowhere in life to discover what he loved doing the most.

Over time, the newsroom became more than just a room to me—it was my second home. The past two years, I was in Griffin Hall 125 more than I was my actual house.

The late-night group conversations, the “family dinners,” the times we got in heated arguments and sometimes even skipped class to debate some useless pop culture trivia, the group sessions of Jackbox, the weekly trips to Skyline Tavern and Mac’s—these experiences are special to me, and I wouldn’t trade them for anything in the world.

The Northerner massively changed my life for the better. I only hope that I was able to leave half as big of an impact on the paper compared to the one it left on me.

Natalie: I really struggled thinking about what to put here. I could talk about the most memorable times me, you, and Jess have spent hanging out together at your place, listening to Bulletproof and sharing hilarious life stories. I could talk about our late nights in the newsroom together, complete with popcorn throwing and the musical soundtracks that I hate so much. But instead, I’ll mention how you are the kindest person I know and inspire me to be better on a constant basis. I’ll always be there for you for any reason, even if it’s just to explain another slang term you don’t understand.

Billy: It’s honestly upsetting how we went several years in college without knowing that the other existed. I’m incredibly glad that I forced you to come hang out with us, as you’re the coolest person I’ve ever met. I’ve always thought that “you can do anything you put your mind to” was false until I met you and saw that you are good at literally everything you have ever tried doing. I relate to you more than anyone I’ve ever met! You’re like the brother I never had, and I am so lucky to be your friend.

Sierra: The queen of sports, videography and not putting up with anyone out of line. If there’s anyone I’d bet on being incredibly successful, it’s you. It’s weird to think about how you were actually the first person from the group that I knew, all the way back to our first writing class. I don’t think either of us would’ve imagined that we’d end up in this spot today. You deserve all the best things, and I hope you get to meet Ariana Grande one day.

Josh: I definitely don’t pay attention to astrology at all, but I know it will warm your heart to hear you’re my favorite Leo. Who else would I share all the stupid memes I see on Twitter with that only you and I would understand? Your energy always bounces around the room and gets everyone motivated. I think every friend group should have a Josh—they’re missing out if they don’t.

Sean: Nothing makes everyone in the newsroom happier than getting a “what’s up?” from you. (Billy definitely just read this and said “What’s good, Seannnnn?” in his mind.) Your smile and laugh are infectious, and you somehow manage to lighten the mood in any situation. We gotta start up that Divinity playthrough as soon as possible.

Alyssa, Corinne and Rachel: I am so excited for you guys!! I know you’re going to do some really sick stuff next year. Hopefully next year your semester isn’t shortened like this one was. If you three ever need tips, advice, a list of TV/movie recommendations or anything else, you know how to get in touch with me.

Dean, Dr. B, Stacie, Lex, Alyssa, Michele, and every other professor that believed in me: Thank you so much for your continued support. I’ll always remember how much all of you helped me along the way! I wouldn’t choose any other university if I had to do it all over again.

I’m leaving The Northerner, but I don’t feel like The Northerner is leaving me. Wherever I end up, I’ll always have the memories lurking in the back of my mind, thinking of some of the best days of my life.

To everyone reading this who isn’t part of the Northerner with even a passing interest in writing or telling stories: going to one of the meetings will be the best decision you ever make. Every single person on the team, myself included, always says they wish they had joined sooner. The Northerner gives you vital experience for a career in any field, it gives you an opportunity to meet interesting people all over campus, and most of all—at the risk of sounding like a terrible high school coming-of-age movie—it gives you a family. Head down to the newsroom. You won’t regret it.