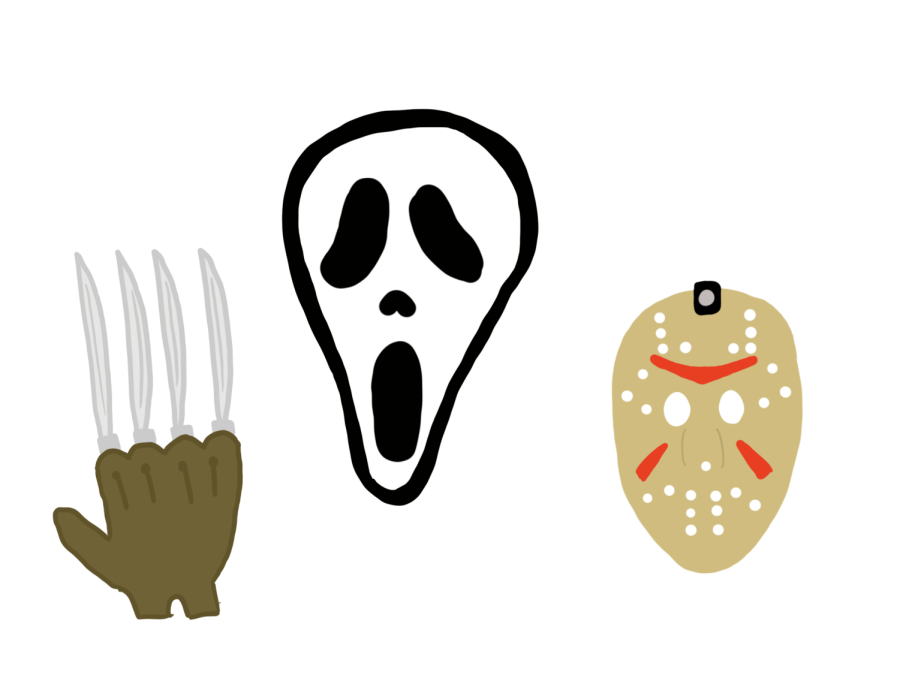 If you want a feel-good film about powerful women, then this is for you. Sandra Bullock and Nicole Kidman star as sisters who are witches, trying to use spells and magic to battle dark forces all while dealing with their romantic relationships. That’s all I can really say without spoiling anything. But that’s also all I can really say in general—this movie is good, but it’s all over the place. If “Hocus Pocus” was a rom-com, I’m sure this would be it. Watch this film for Nicole Kidman (duh), but stay for the Stevie Nicks song (also duh).

Have you ever watched a slasher film and wondered, “Haven’t these guys ever seen any horror movies? Why are they so stupid?” “Scream” revitalized the horror genre when it released by featuring characters who knew what to do in terrifying situations because they had seen movies like “Halloween” and “Friday the 13th,” and it poked fun at the horror genre with several jokes (and kills) that pay reverence to the films that came before it. If you like laughs to go along with your scares, queue up this undisputed horror classic for a great time.

“Alien” is quite possibly one of the most original and immersive sci-fi horror films ever made. Have you ever questioned what extraterrestrial life might really be like (sorry little green men), or how far gone late-stage capitalism will be in the future? No? Just me? Regardless, “Alien” has both. And if that doesn’t interest you, watch it for the amazing practical effects, cinematography, original score and amazing reinterpreted late ‘70s fashion that we’re only just now catching up to. Honestly, stop whatever you’re doing, go home, close the blinds, turn off the lights and watch it.

As a cult classic when it comes to Disney Channel original movies, “Halloweentown” is a great spooky season option when jump scares and gore aren’t really your thing. Halloween is the time to transport yourself into a magical universe that is non-existent during the normal year, and this film does that. With the iconic Debbie Reynolds playing the grandmother we all wish we had, it is overall a perfect film for huddling under blankets with hot chocolate and the bowl of candy you swore you would hand out to the neighborhood kids.

I don’t do demons and real scary stuff so Casper it is.

“Scary Godmother” is another Halloween must for me. In this animated classic, a young girl who is terrorized by her cousin Jimmy is saved by her Scary Godmother and whisked away to the ‘Fright Side,’ full of the skeletons that lives in your closet, the monster under the bed and a werewolf named Harry. What ensues next is the best Halloween party of all time. It’s funny, cute and all-around charming.

Found footage horror movies are either terrible or amazing, and this one is definitely the latter. A serial killer films his murders by posting Craigslist ads for a videographer job paying $1000. This tempting gig lures so many people to him, he has a cabinet full of VCRs and DVDs. He’s done this so many times that he begins to feel bored by his “passion.” What will he do to spice things up? You’ll have to watch for yourself!

As a kid, my parents had a very tight leash on what I could watch, and that’s mostly because I watched “Monster House” when I was seven. “Monster House” created a genuine fear of my neighborhood—and my house‘s dirty, unfinished basement—for it resembled the titular “Monster House” so much that I still think about it as I drive through the neighborhood. The movie also taught me that everyone has uvulas and it tops any modern-day house decoration for this spooky season.

Interview With The Vampire (1994), by Neil Jordan

Does this count as a Halloween movie? For me, any spooky film is categorized as Halloween and this one is definitely spooky. Starring Brad Pitt, Christian Slater and Tom Cruise, this movie follows a vampire telling the story of his life to a biographer. Unhealthy relationships, vampire children, blood, that eerie haze that all ‘90s movies seem to have about them—this film has it all. And it’s way better than “Twilight.”

You can’t go wrong with a Disney classic starring Bette Midler as a wonderfully wicked witch alongside her lovely witchy sidekicks, played by Sarah Jessica Parker and Kathy Najimy. If you are someone who doesn’t enjoy a horror flick or jumpy thrillers, this is the fun, spooky Halloween movie for you. You get everything from old spells gone wrong, a chatty black cat, wide-eyed teenagers, trick-or-treat shenanigans, a race to save the day and a musical performance we all needed from Midler. A perfect film for the Fall season to cuddle up on a chilly night, drink apple cider and belt out “I’ll Put A Spell On You.”