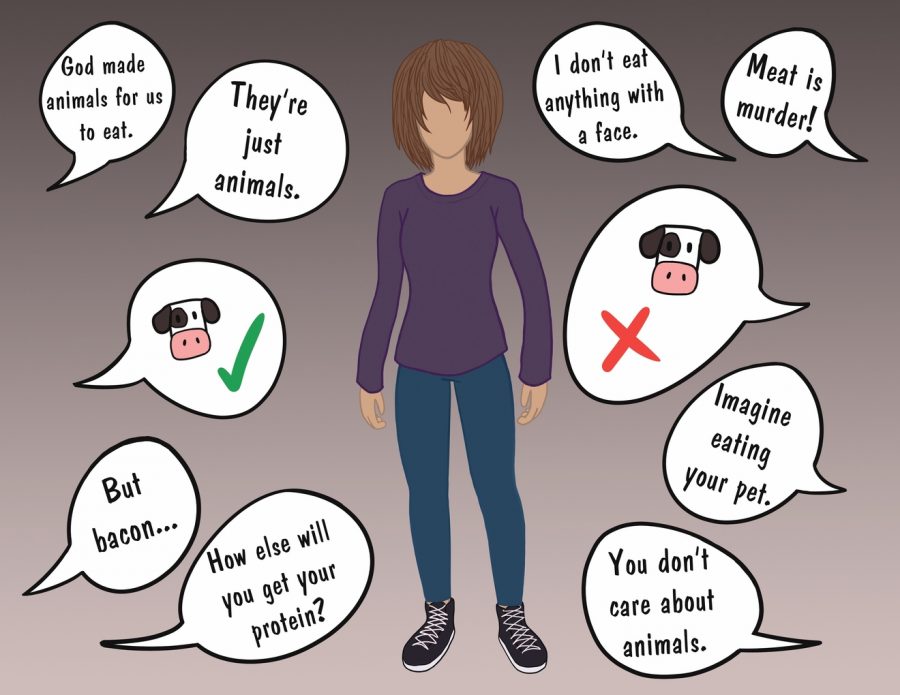 Opinion: What being a wannabe vegetarian taught me about perfection

I can still remember the stale smell of bread on my Subway uniform as I excitedly claimed on the job, “I’m going to be a ‘Happy-meat-a-tarian!’” What my 17-year-old self meant at the time was that I was only going to eat meat that was raised “ethically.”

This first attempt probably lasted a few weeks or a month in total, and then it was back to the daily grind of eating whatever I found in front of me.

The next attempt was the summer after my senior year of high school. My best friend and I decided we were going to give ourselves a set amount of time over the summer during which we would be totally vegetarian. I think we settled on two months. She had been pescatarian in the past, so this process was easier for her than me, but I never particularly loved meat and was interested in exploring the concept of vegetarianism.

Despite the fact that we had previously settled on our two-month time frame, I found people to be particularly judgmental of me when I resumed eating meat again. At that point, the joke had become that I had a habit of being vegetarian, much like an eighth-grader goes through an “emo” phase.

Throughout my freshman year of college, I remained steadily aware of the qualms I had with eating meat, but justified my behavior by claiming that my options were limited (which, considering this was four years ago and I was stuck eating NKU dining, wasn’t completely incorrect).

Somehow I thought in my mind that if I was aware of the systematic oppression of animals, then at least I wasn’t mindlessly eating anything and everything without batting an eyelash. What I didn’t think, however, was that my awareness of the problem and conscious decision to ignore it might have been worse than living ignorantly.

A turning point occurred when I watched the documentary on Netflix, “Cowspiracy.” It was at that point I finally decided, I can’t do this anymore. Somewhere around the same time, I had an encounter with my friend James, who told me he wanted to eat vegan on his own time, but that he would eat meat and dairy if it was provided by someone else or was a leftover that would eventually go bad.

At the time, this made sense to me. The way he justified it was that by consciously choosing to purchase only vegan food, he wasn’t paying into the industry. And by consuming animal products—say, in a party setting—he was using resources that, regardless of his presence, would be purchased and consumed anyway. This was a happy medium that I could get behind.

When I finally decided to adopt this more conscious lifestyle, even upon explaining it to others (and not strictly describing myself as a vegetarian or vegan), I felt discouraged by the negativity I encountered.

More than that, I felt like I owed everyone an explanation for what I was consuming every day.

This was something I learned to accept and laugh about because I did understand the ridiculousness of what I was saying as it exited a mouth that only sometimes ate animal products.

I might as well have been saying, “Well, I only eat meat on Mondays, Wednesdays and Fridays, and then every other year I eat meat on Passover.”

And to a society that openly ridicules anything to do with vegetarianism or veganism, this was the perfect recipe. I was asking to be the brunt of every joke.

There was a part of me, too, that struggled a lot with overeating. I have developed a habit over many years of battling personal insecurities of associating food with comfort. Although I never felt particularly deprived without meat and was never a big meat eater, it became incredibly easy (due to the wishy-washy nature of eating meat but refusing to buy it) to make “exceptions” and fall off the wagon any time I was in a situation where I wanted to indulge.

It’s 3 a.m. and I’m partying with my friends? Time to get a supreme chalupa from Taco Bell.

I’m in Europe and someone just offered me fish and chips? I need the cultural experience.

I’m at a hot sauce festival and someone is offering me buffalo chicken dip? Yep.

These exceptions became more like rules until eventually I decided to throw them out entirely and give up on vegetarianism for a while.

Even so, I was still met with resistance from the general public. Not bringing up the “vegetarian” thing to my main group of friends in over a year (there was, admittedly, a gap six months in England when I bothered my study abroad friends about my moral dilemmas), I was hanging out at someone’s house a few months back when the mention of ordering pizza came about.

“Will there be any meat on the pizza?” I asked.

In an outburst, my friend jokingly exclaimed, “YOU CAN’T KEEP ON WITH THIS VEGETARIAN BULLSH*T, NICOLE!”

And when my mom decided to cut meat (except fish) and dairy out of her diet, her eyes were opened. Suddenly people made snide remarks to her and pressured her to eat meat on a regular basis. Someone always had something to say about her life choices.

It is through these trial and error experiences and my own struggle to accept that eating animal products doesn’t align with my intrinsic values that I realized not only the influence that a culture can have on an individual’s choices, but also the value in avoiding ideals of perfectionism.

I have a bad habit of needing to be completely perfect all the time, and when inevitably making an error, throwing in the towel. And I realized that that’s not what vegetarianism or veganism is about, and it’s also not what living is about.

For the sake of my own sanity and also the most optimal way of making change, I have accepted that it’s better to do what you can now than it is to try and move mountains all at once.

It means more to be intentional in your choices and conscious about the things you eat on a daily basis than it does to try being perfect and give up when you eventually miss the mark.

No, I’m no vegetarian. I now refuse the label and if it makes me a hypocrite, then so be it. But this year, I have set out with my friend to stop eating meat and four months into the year, I’ve only had one slip up. And that’s better than I can say for past me.

And really, who else should I be comparing myself to?